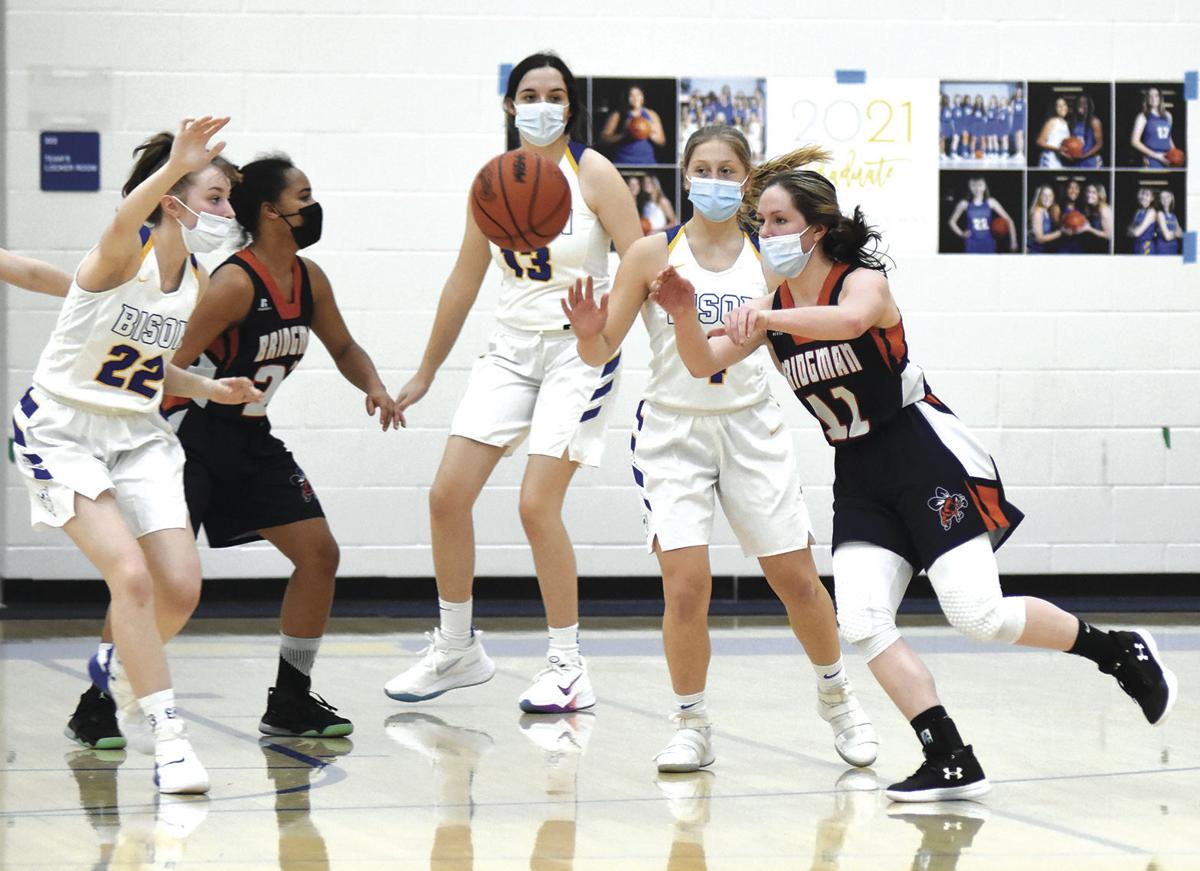 Samantha Rydwelski (right) passes the basketball for Bridgman during a Feb. 27 game in New Buffalo. 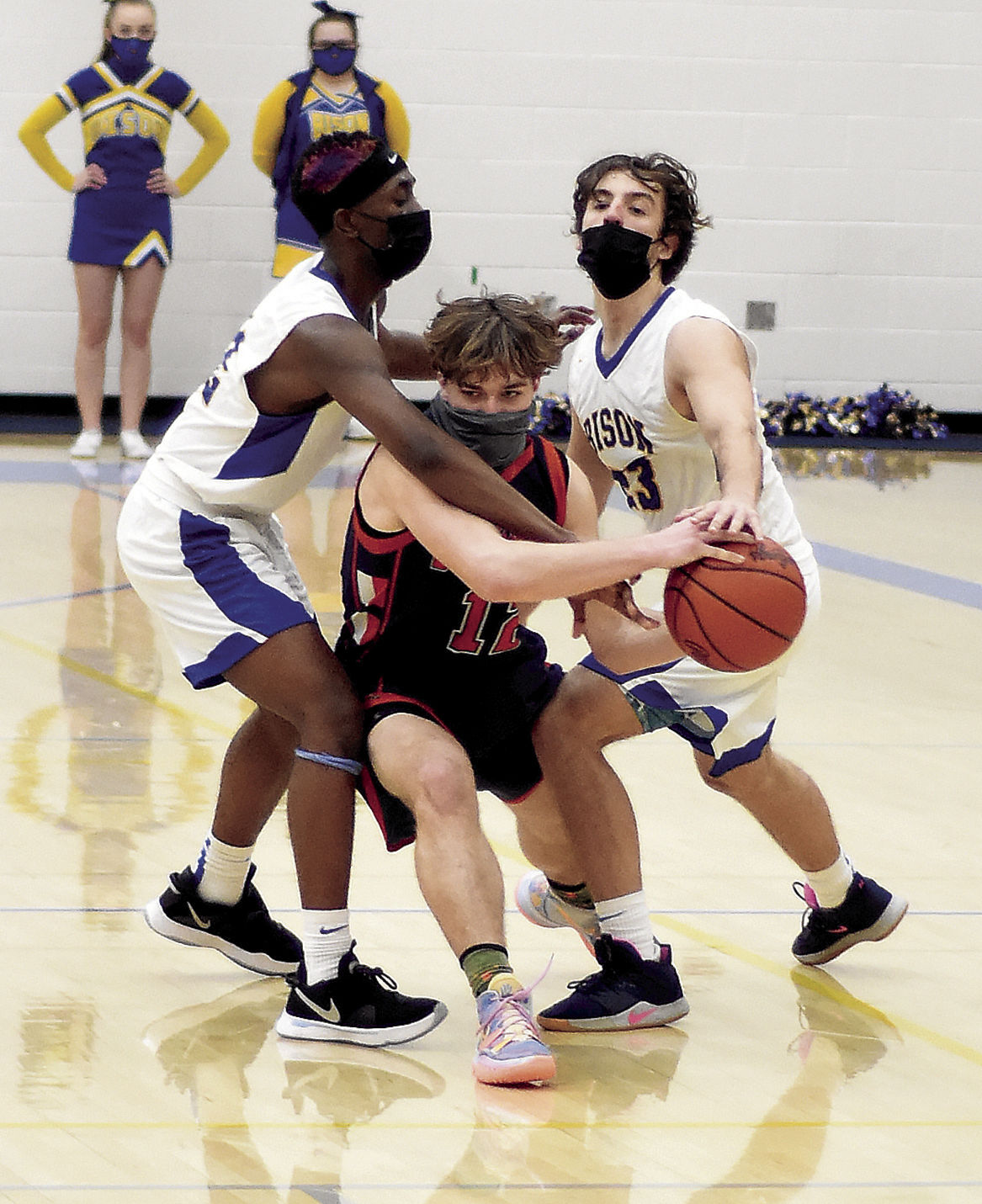 Jayce Warren of Bridgman (center) tries to get through Bison defenders Mark Shaw (left) and Sean Gordon during a Feb. 27 game. 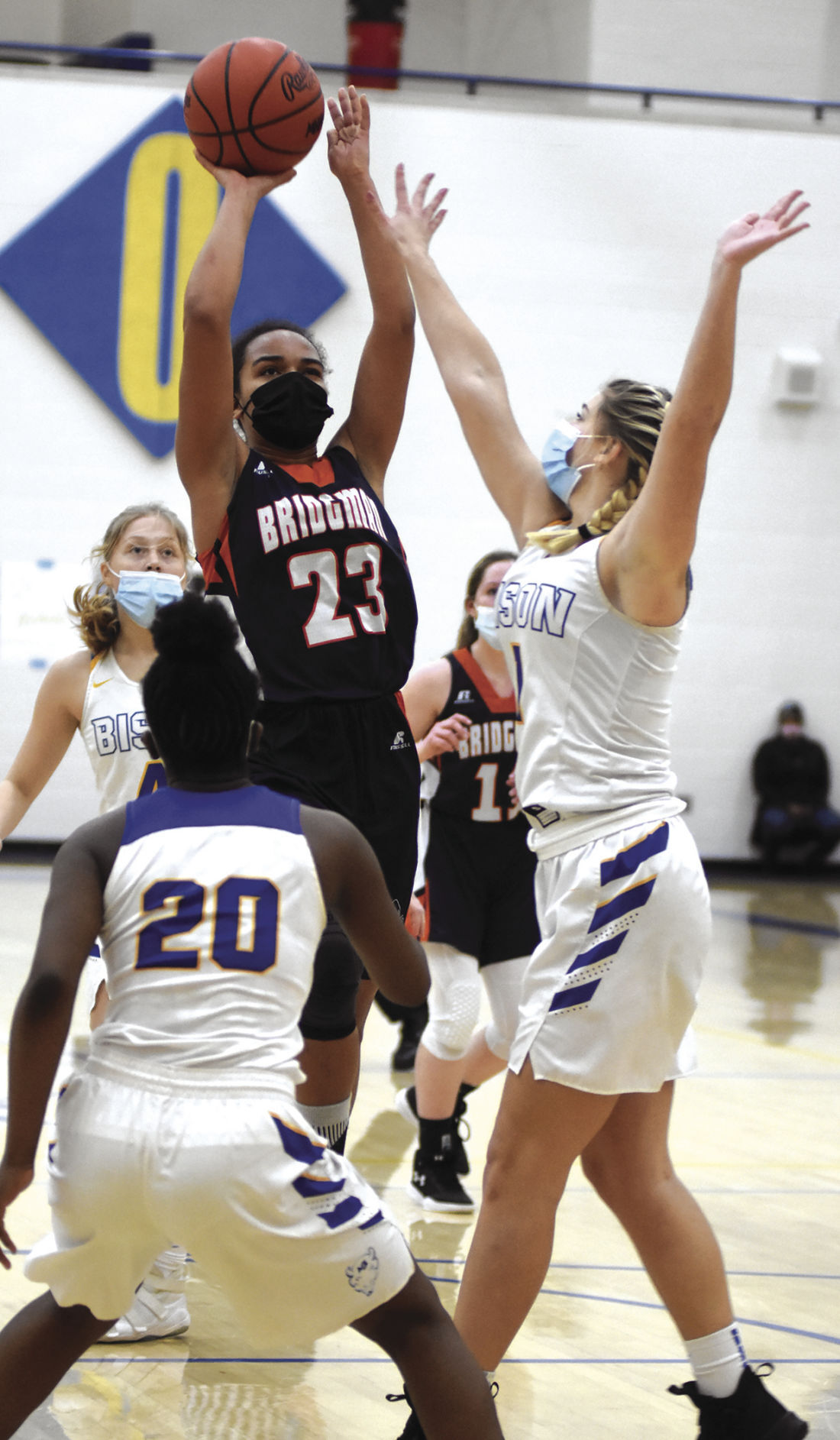 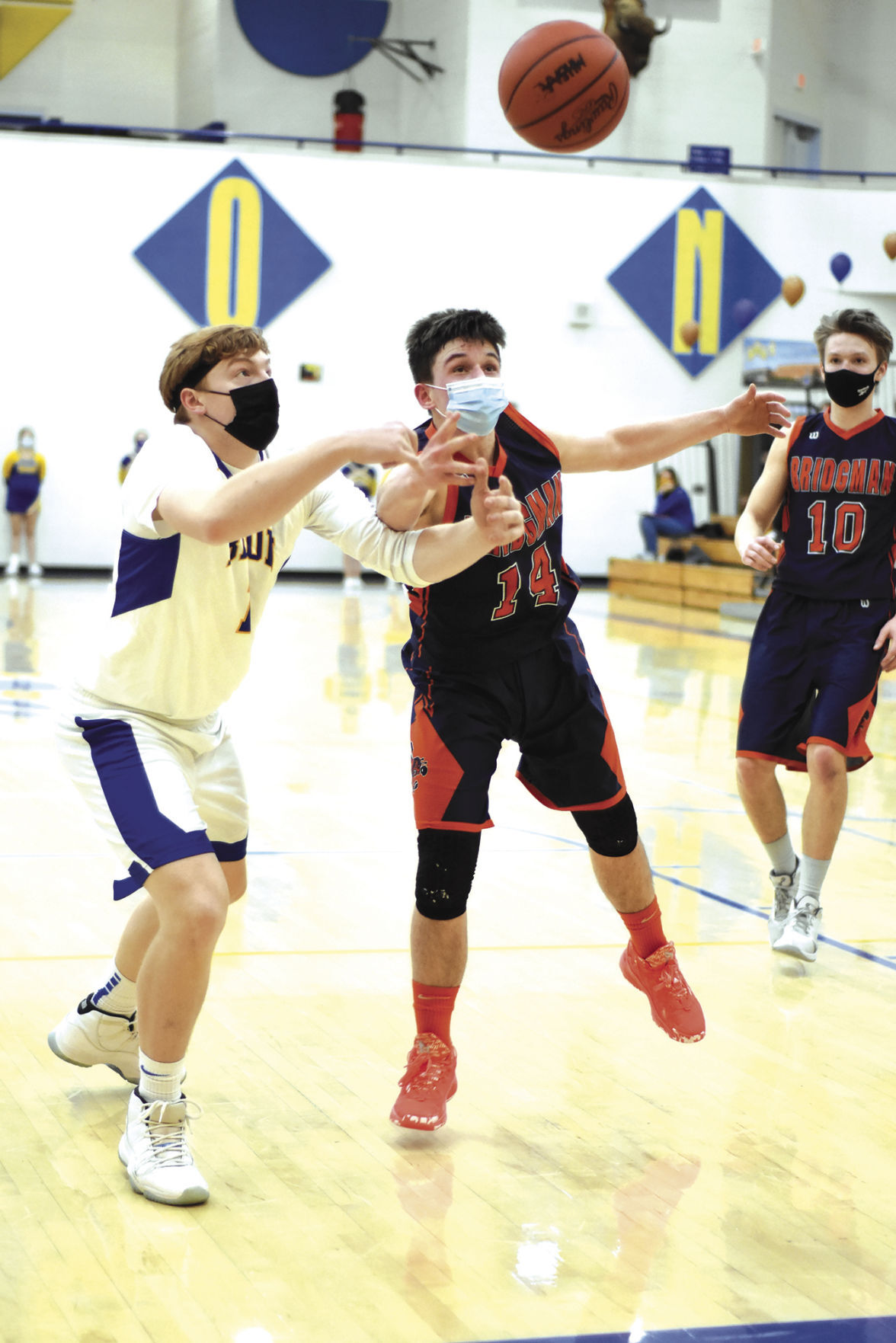 ABOVE: Nate Tripp Jr. of New Buffalo and Bridgman’s Nate Necas go after the basketball. 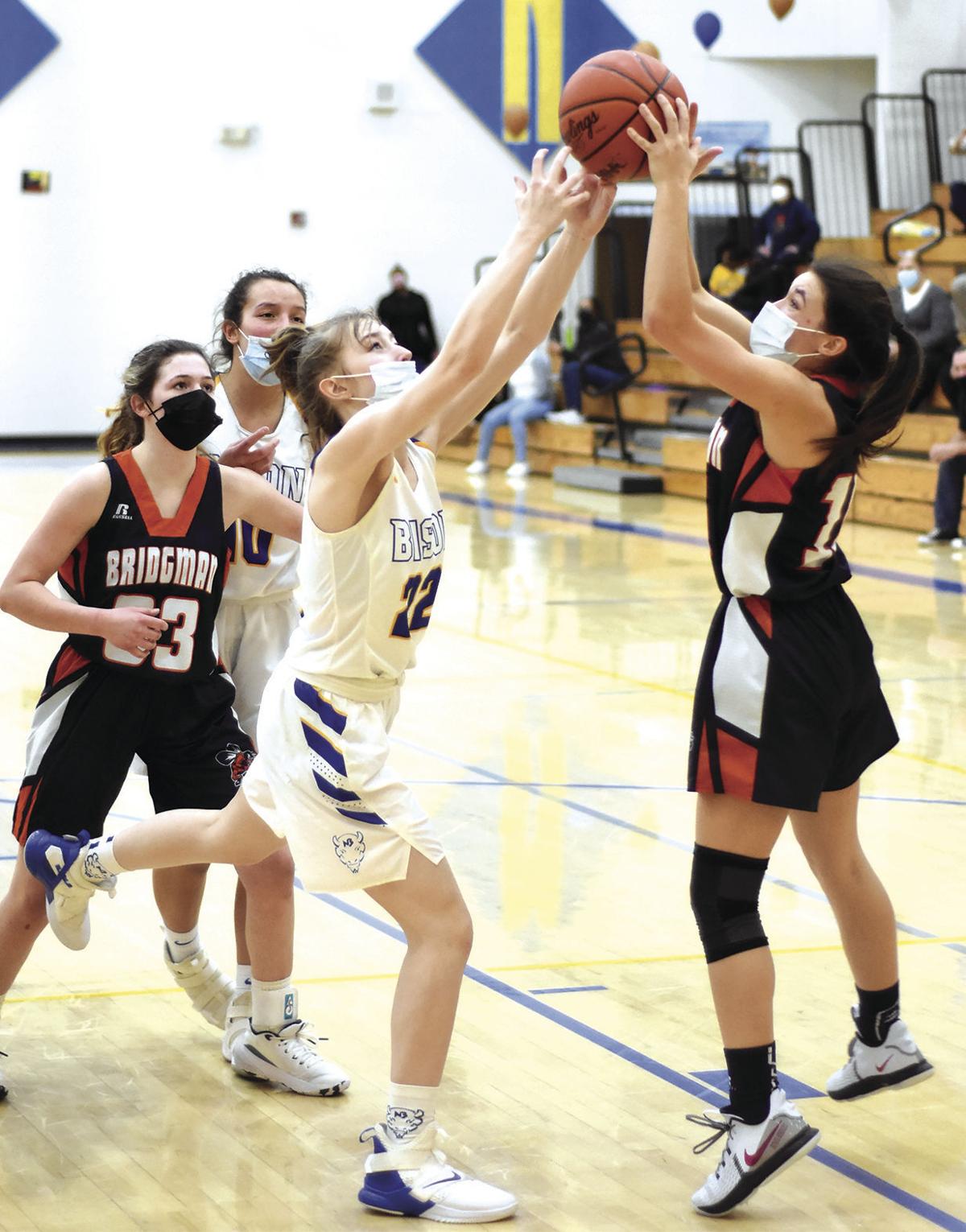 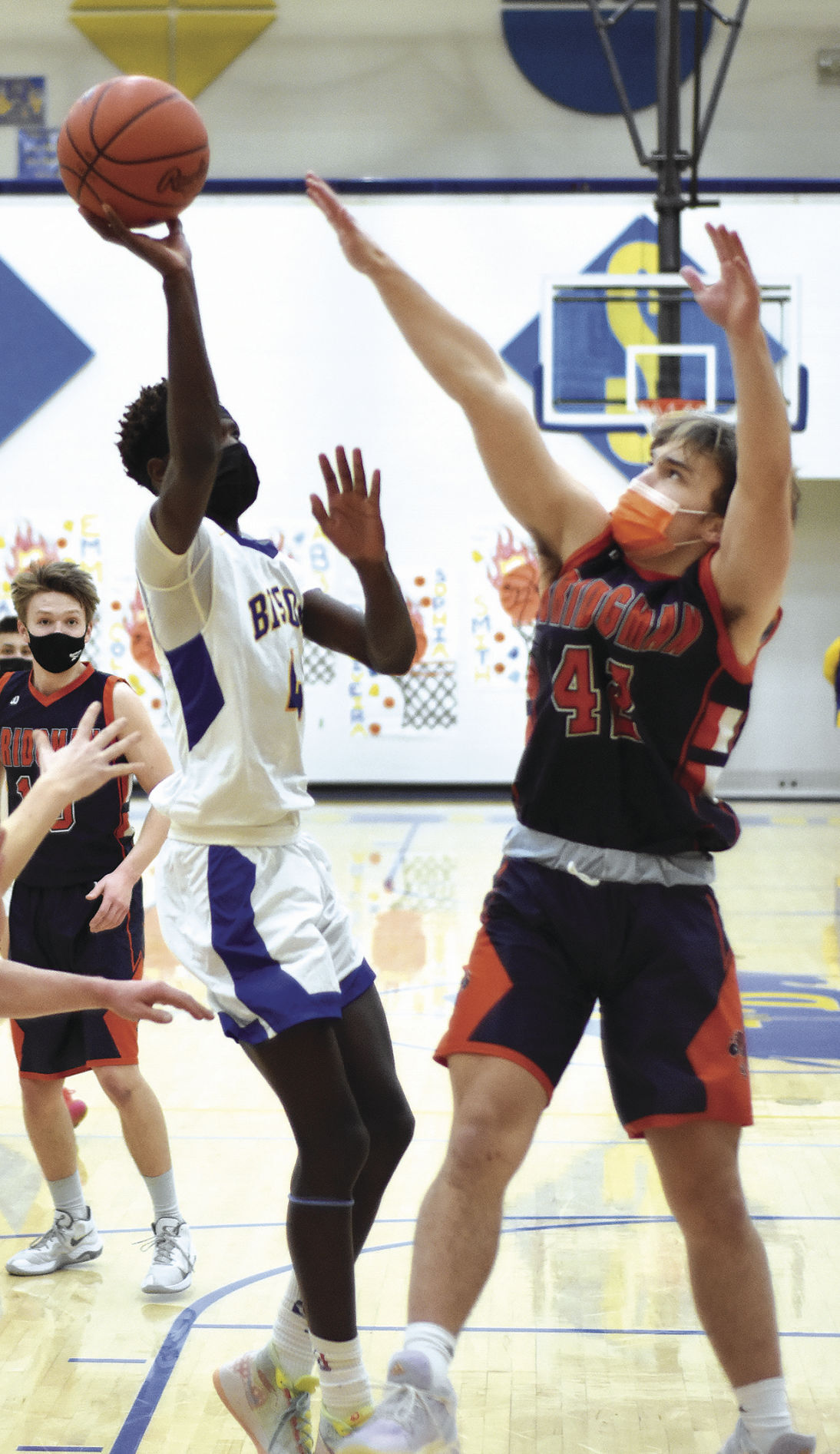 Samantha Rydwelski (right) passes the basketball for Bridgman during a Feb. 27 game in New Buffalo.

Jayce Warren of Bridgman (center) tries to get through Bison defenders Mark Shaw (left) and Sean Gordon during a Feb. 27 game.

ABOVE: Nate Tripp Jr. of New Buffalo and Bridgman’s Nate Necas go after the basketball.

A trio of early three-point buckets by Jayce Warren, John Sanderson and Dylan Reisig powered the Bridgman boys, but New Buffalo kept pace at 9-all thanks to scores from Ryan Vinson and Mark Shaw.

Additional three-pointers by Warren and Sanderson opened up a 15-9 lead, and the Bees went on to carry a 21-16 margin into the second frame as Warren beat the buzzer with yet another “3.”

The Bison cut the margin to a single point (23-22) early in the second quarter as Jeremiah Mitchell tallied four quick points, but the Bees answered by going on an 8-0 run with Nate Necas hitting a three-pointer and Warren scoring off a steal.

Bridgman entered the second half leading 35-28 and by the beginning of quarter number four had upped the margin to 11 points (47-36) as Necas and Warren connected from three-point land during the third.

Necas scored the first five points of the final period, padding the lead to 52-36. The margin never dropped below double digits the test of the way.

“We knew it was going to be a tough game coming in,” Necas said. “We knew they were quick so we had to stop middle penetration, and I think we did a very good job of that tonight.”

Warren led all scorers with 23 points, Necas finished with 15 points, and Luke Blesy tallied 10 for Bridgman.

Miller gave credit to junior varsity coach Justin Hahaj for how he prepares players at that level to play solid defense.

Both squads had picked up wins the night before – New Buffalo topping Eau Claire and the Bees getting past Lawrence.

On the girls side Feb. 27, New Buffalo’s depth paid off more and more as the game went on.

The Bees kept pace in the first quarter, leading 8-7 thanks to baskets by Olivia Tomlin, Elise Schmaltz and Yvonne Carranza.

The home team’s advantage continued to grow in the second half, with the Bison leading 47-21 after three quarters and 56-23 when the final buzzer had sounded.

In the end everyone on the New Buffalo roster finished with points on Senior Night, with Emma Lantz and Corkran each tallying 11 points.

“It was a good Senor Night,” noted 12th-grader Sophia DeOliveira.

On Feb. 22 the Bison girls avenged a season-opening loss by edging Michigan Lutheran 33-31 as Abby Vitale scored the go-ahead basket to cap a fourth-quarter rally.

The Bees bounced back to trounce Eau Claire 50-11 on March 1.