You have permission to edit this article.
Edit
Home
News
Features
Sports
Photo Galleries
Opinion
Obituaries
Community
Classifieds
Jobs
How Do I?
1 of 7 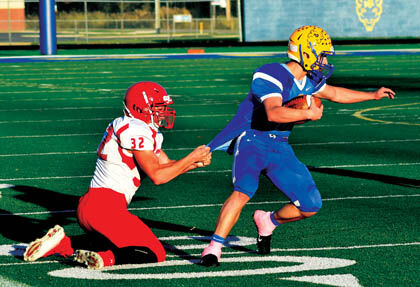 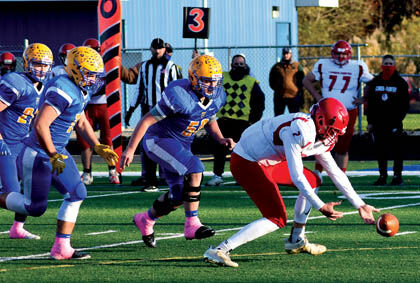 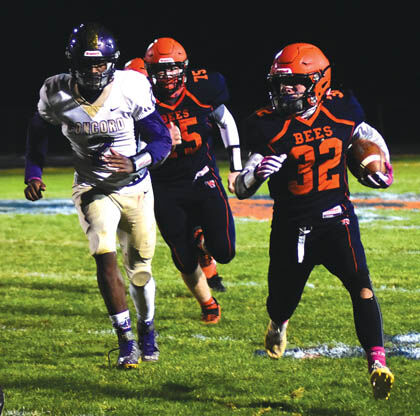 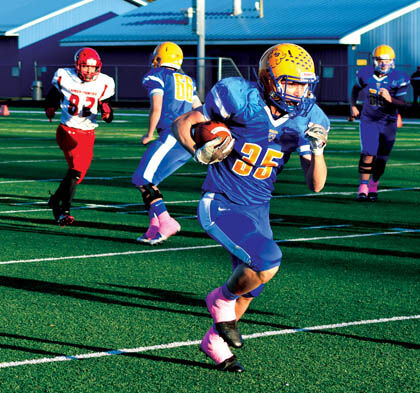 New Buffalo's Brendan Tanksley runs for a first down late in the first half during the Oct. 31 playoff game. 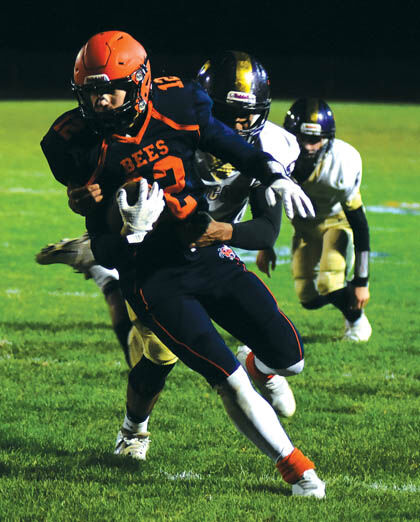 Bridgman receiver Jayce Warren runs away from the Concord defense on Oct. 30. 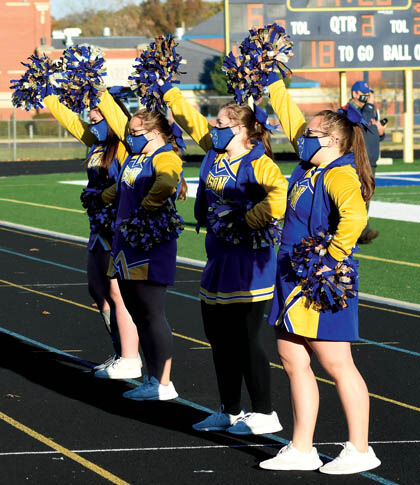 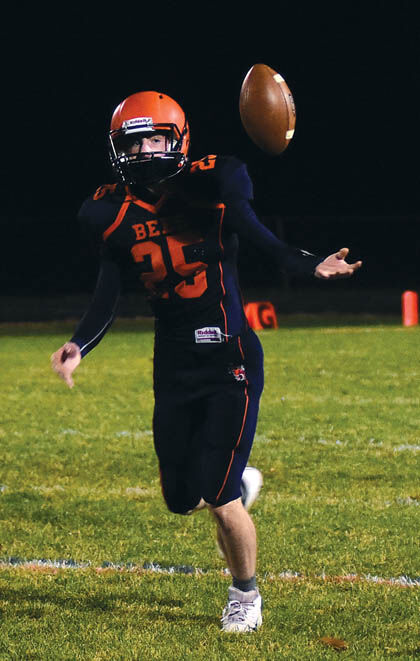 New Buffalo's Brendan Tanksley runs for a first down late in the first half during the Oct. 31 playoff game.

Bridgman receiver Jayce Warren runs away from the Concord defense on Oct. 30.

NEW BUFFALO — The New Buffalo High School football team won the program's first playoff game since 2001, and its first ever in eight-man competition, on Saturday, Oct. 31.

The host Bison took a hard-fought 12-8 lead into half-time against Camden-Frontier before dominating the second half en-route to a 54-14 victory.

New Buffalo head coach Matt Johnson said the Bison had a hard time getting their offense on the field in the first half, but executed much better over the last two quarters.

New Buffalo scored on the first play from scrimmage as quarterback Michael Bombin raced 65 yards to the end zone to open up a 6-0 lead.

Camden-Frontier battled back as their QB, Randy Lawson, powered his way in from 26 yards out at the 2:41 mark of the first quarter and then used his feet to complete the two-point conversion for an 8-6 advantage.

It was a defensive struggle after that until the late-going of the second period when Brendan Tanksley gained 21 yards on a fourth-and-three play, setting up Ben Coffeen's six-yard touchdown surge with exactly one minute showing on the clock to open up a 12-6 lead.

Tanksley said taking the lead right before the half "got the team's energy up."

Camden-Frontier lost more than the lead as the first half wound down — Lawson left the field after being injured on a defensive play and did not return.

New Buffalo had opened up a 46-8 lead before Camden-Frontier found the end zone again in the late going.

Bombin completed 2 of 5 passes for 107 yards and two touchdowns while rushing 19 times for 200 yards, 2 TDs and a trio of 2-point conversions.

Tanksley had eight carries for 48 yards and two touchdowns along with a 53-yard scoring reception.

Coffeen ran the ball eight times for 45 yards and a TD; while hauling in a 54-yard scoring strike from Bombin.

The Bison finished with 400 total yards on offense.

Johnson said he understands the impact of losing a starter in the wake of New Buffalo's Oct. 23 loss by a 54-6 margin at Lawrence which they played without Bombin and Tanksley (starters Anthony Lijewski and Stephen Margaritis also were injured and did not play on Oct. 31 either).

The Bison visited Martin (the top seed in the eight-squad Division 1 region) for a Friday, Nov. 6, semifinal game won 50-0 by the Clippers.

Nate Necas rushed for a pair of touchdowns and threw another as Bridgman’s eight-man football team defeated Concord 43-21 in an Oct. 30 post-season contest.

Bridgman's Jayce Warren caught a touchdown pass and returned an interception for a defensive score against Concord.

Necas led the Bees’ ground game with 26 carries for 160 yards.

Travis Locke forced a fumble and made a fumble recovery for Bridgman's defense.