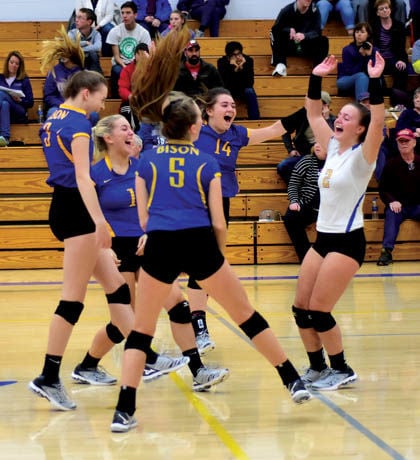 The Bison celebrate a win during the tournament. 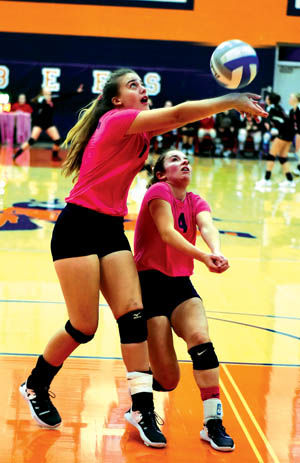 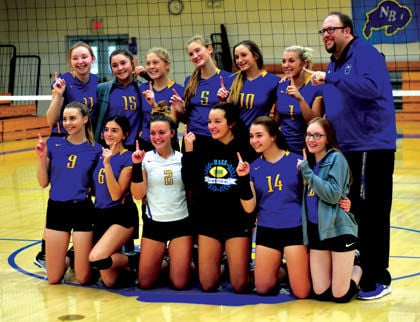 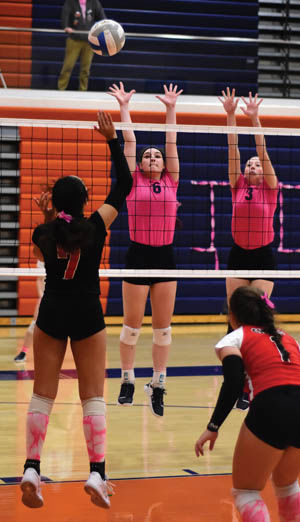 Going for a block. 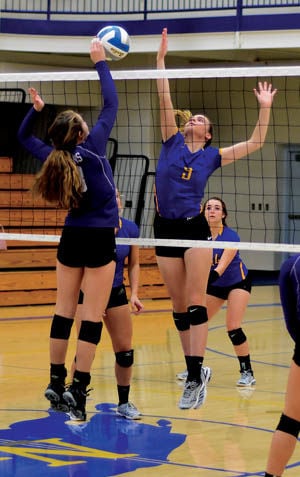 Playing above the net. 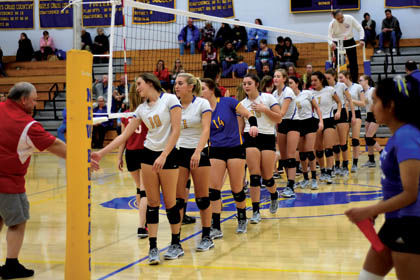 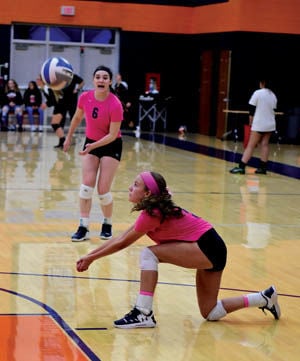 Peyton Oman digs the ball up for Bridgman. 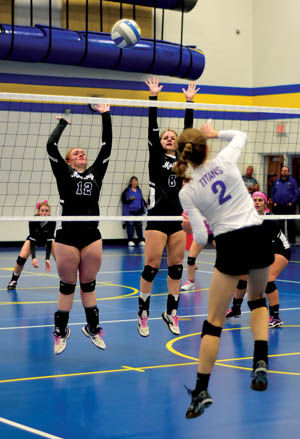 Mustangs go for a block.

The Bison celebrate a win during the tournament.

Going for a block.

Playing above the net.

Peyton Oman digs the ball up for Bridgman.

Mustangs go for a block.

“I feel like we have a really good team going into districts,” said NB senior Rachel Hoffstetter (the (28-5-2) Bison are set to open the post-season Nov. 4 at River Valley).

New Buffalo entered the tourney as the top seed, unbeaten in regular-season matches.

They kept winning until the opener of the finals against second-seed, Michigan Lutheran. The Titans emerged victorious in that one 25-23, but the Bison bounced back to take game two by a 25-15 margin.

The decisive third contest (played to 15) was tied at 4-all (Kelsey Corkran had a tip and an ace serve in the early going for the home team) when New Buffalo made its move.

An ace serve by Jacqueline Hauseman, a series of tips and spikes from Sophia DeOliveira, and strong play above the net by Ashley Hauseman helped open up a 12-6 lead. DeOliveira then came through with a keep spike to the gym floor and a game-ending ace serve to leave the final tally 15-7.

“It felt really good, especially since this season I’ve been trying to work on my serving,” DeOliveira said. “It just felt good to finish off that game.”

Bridgman claimed the outright BCS Red Division title at the Oct. 26 conference tournament played in Niles, besting Brandywine 26-24, 25-23 in the finals (the Bees rallied from a 18-24 deficit in the first contest).

Bridgman’s only loss of the day came against Parchment, setting up the championship match with the host Bobcats as a winner-take-all situation.

“It was pretty much winner was going to take all,” Bridgman coach Jim Ragosta said. “That was just a phenomenal match. The whole team contributed. Haley Goff just totally took control of the offense. She just dominated to close the game out.”

Goff, who recently missed time with an ankle injury, led Bridgman with 47 kills on the day.