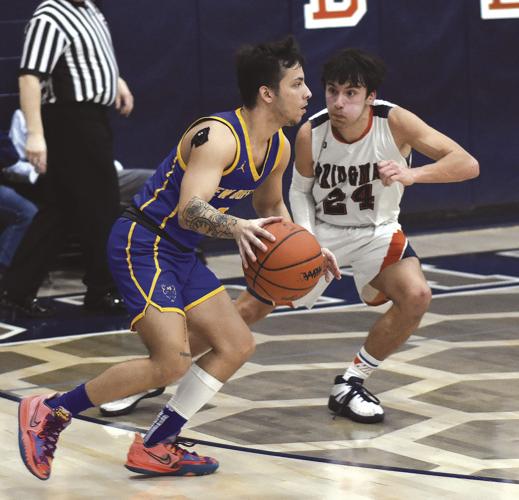 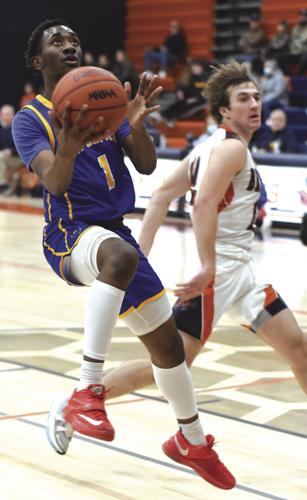 Mark Shaw drives to the basket for New Buffalo during the Jan. 29 game in Bridgman.

Mark Shaw drives to the basket for New Buffalo during the Jan. 29 game in Bridgman.

BRIDGMAN — The New Buffalo boys basketball team bounced back from its first loss off the season (an 80-64 setback at Niles Brandywine on Jan. 28) by holding off Bridgman 66-56 the next night.

The victory keeps the Bison atop the BCS White Division standings.

The Bison led by a single point (15-14) after one quarter as Kaden Parmley scored six early points for NB while Riley Gloe knocked down a trio of three-pointers for the host Bees.

Jayce Warren reeled off seven quick points for Bridgman to forge a 39-all tie at the 2:41 mark of the third.

The Bison answered by finishing the quarter on a 9-1 run as Zack Forker, Parmley, Ryan Vinson and Shaw powered the strong finish.

New Buffalo took charge early in the fourth frame with Vinson’s bucket, an Anthony Anderson three-pointer and a steal and lay-up from Shaw forging a 55-43 margin.

The Bison maintained a solid lead thanks to scores by Vinson, Shaw and Jeremiah Mitchell.

Warren and John Sanderson led a late charge by knocking down consecutive three-pointers that cut the lead down to five points (61-56).

“It’s under pressure, it’s a tough shot, I knocked it down, that’s all that matters,” Anderson said.

“You cannot win a basketball game giving up 20 offensive rebounds.”

He said the Jan. 29 victory was a nice bounce-back after the team “just didn’t show up to compete” against the Bobcats.