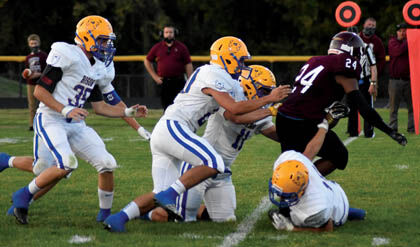 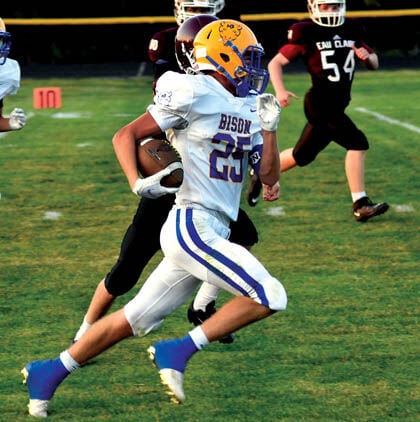 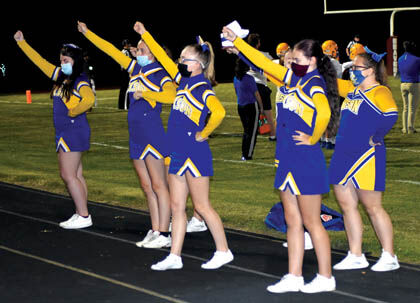 Cheering for the Bison on Sept. 25 in Eau Claire. 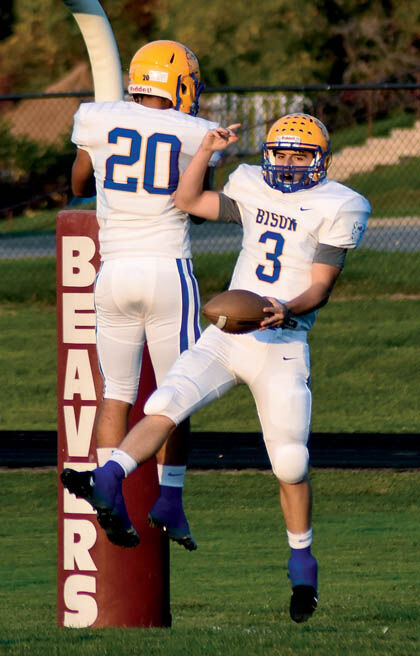 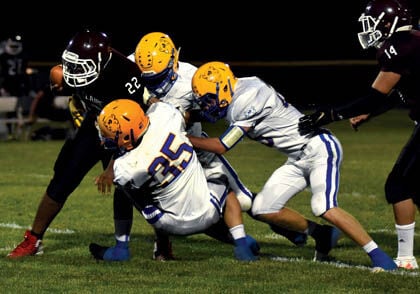 Cheering for the Bison on Sept. 25 in Eau Claire.

EAU CLAIRE — The New Buffalo High School football team gave the scoreboard a workout in the first quarter of an eight-man contest played in Eau Claire on Friday, Sept. 25.

The Bison scored 52 points in the opening period and went on to win 68-0.

Tanksley scored the next TD on a 70-yard scamper with 10 minutes left in the first quarter. Bombin's pass to Anthony Lijewski made it 16-0.

New Buffalo's third visit to the end zone occurred with 7:17 to go in the stanza when Bombin tossed a nine-yard scoring strike to Stephen Margaritis. Bombin was successful on the conversion run to open up a 24-0 margin.

Shortly after Ben Lijewski recovered a fumble at the Eau Claire 41 yard line, Bombin connected with Margaritis on a 30-yard pass for six more points. The junior QB then surged into the end zone to leave the score 32-0 with 5:22 showing on the clock.

A Bombin interception set the Bison up first-and-10 at the Beaver 33 yard line. Bombin finished the short drive with a 15-yard rush to paydirt, and Ben Coffeen's two-point run made it 40-0 with 3:27 to go in the first.

It didn't take Coffeen long to reach the end zone again, this time on a 61-yard ramble at the 2:52 mark.

The Bison reached 52 points with 45 seconds remaining in the first quart thanks to Bombin's 36-yard fumble recovery.

Bombin said the right reads were made on offense and the line blocked well.

"We just came out and executed."

New Buffalo went on to score 16 more points as the game clock ran down non-stop.

With 6:26 to go in the second period Anthony Lijewski sprinted 50 yards for a touchdown and Bombin connected with Andrew Flick for two more points.

Freshman Trent Taylor pushed into the end zone from a yard out with 7:17 left in the fourth quarter (and also ran in the two-point conversion to finish the scoring).

Eau Claire quarterback Landon Baskin appeared headed for the end zone in the late going, but Coffeen made a diving tackle to preserve the shutout.

The Bison racked up 379 yards on the ground and 71 yards via the pass while holding Eau Claire to 74 total yards.

Quarterback Reid Haskins had a big game for the Bees (1-1) on Sept. 25, but it wasn’t enough to overcome defending Southwestern Michigan Eight-Man Football League champion Martin (2-0).

Haskins rushed for 122 yards and a pair of scores, threw for 74 yards, and had 10 tackles to lead the Bees. Christian Dinges also had 10 tackles, and Jayce Warren caught six passes for 60 yards.