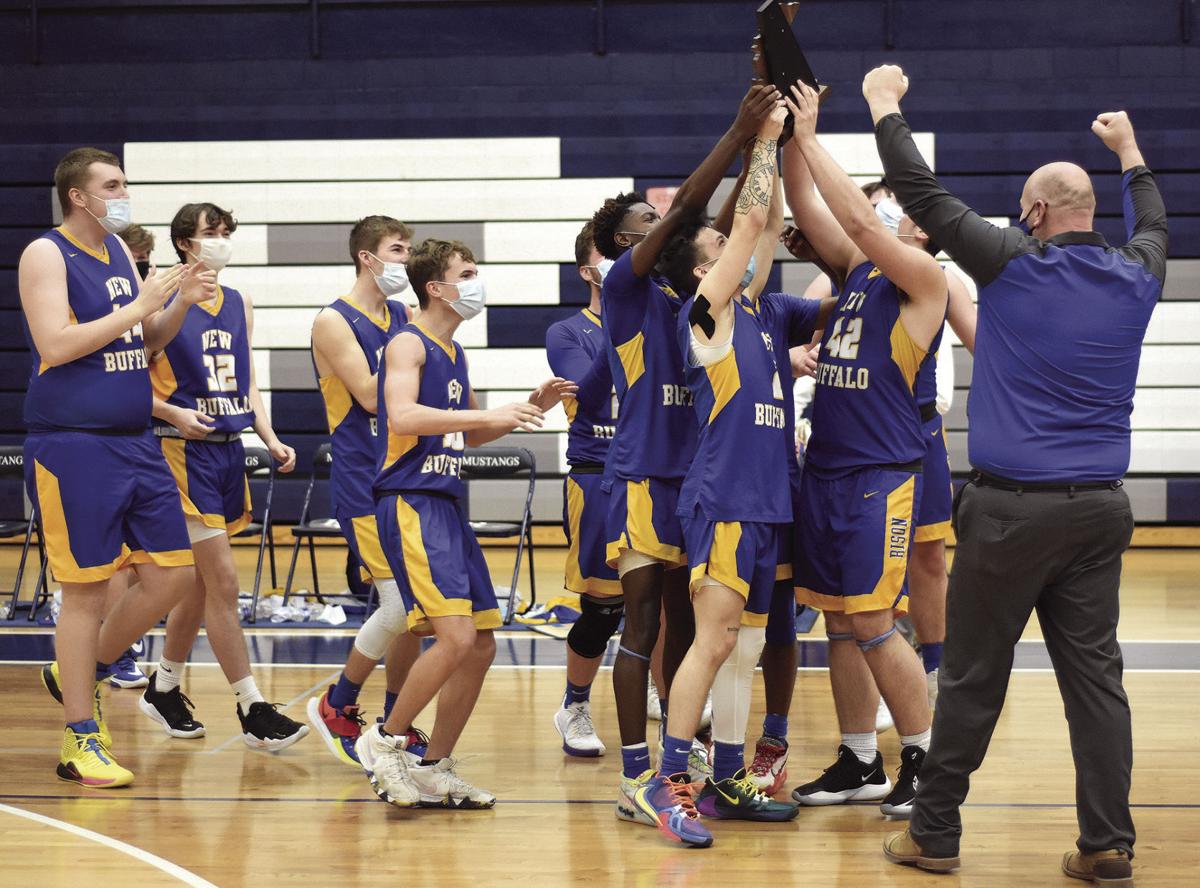 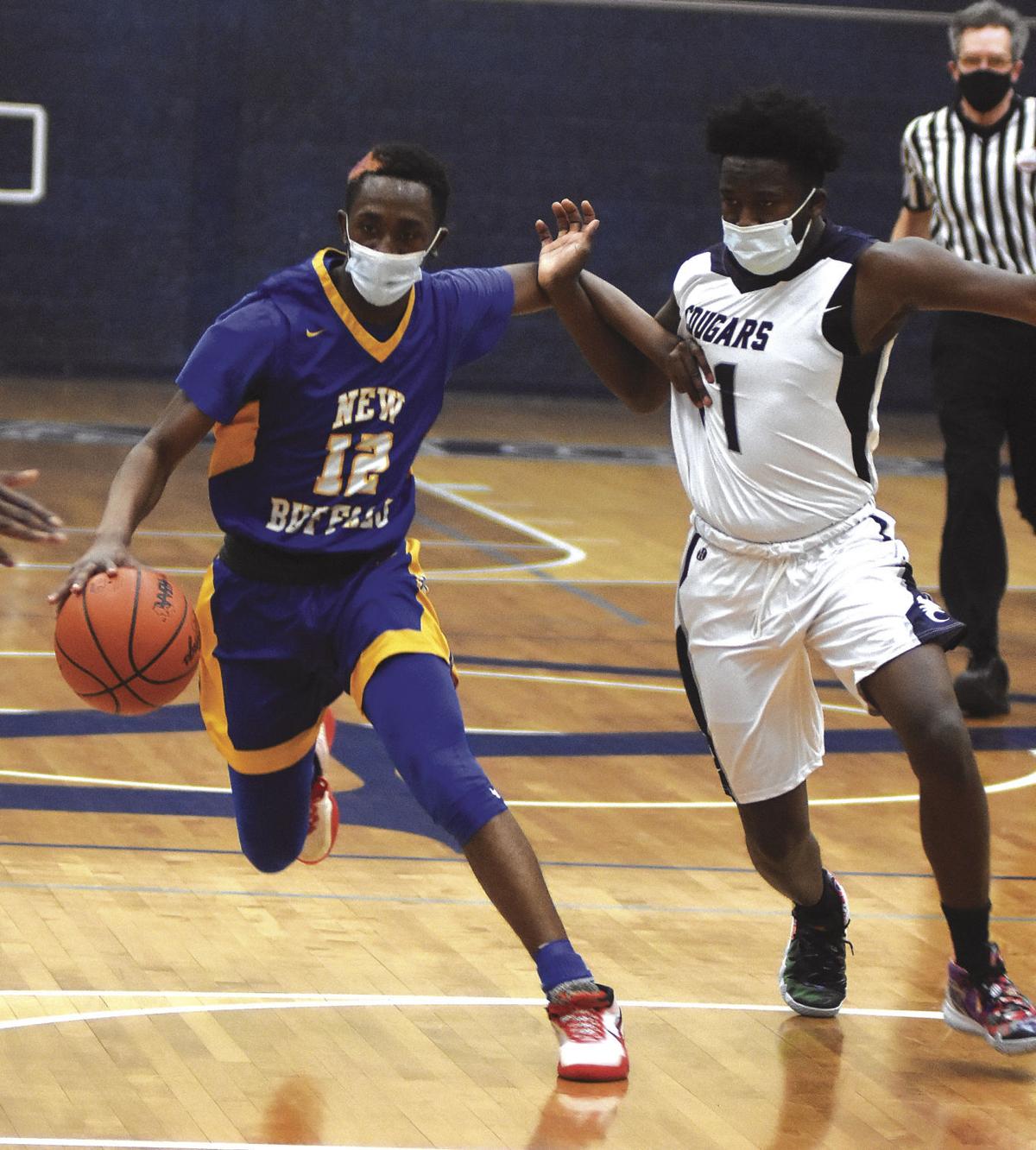 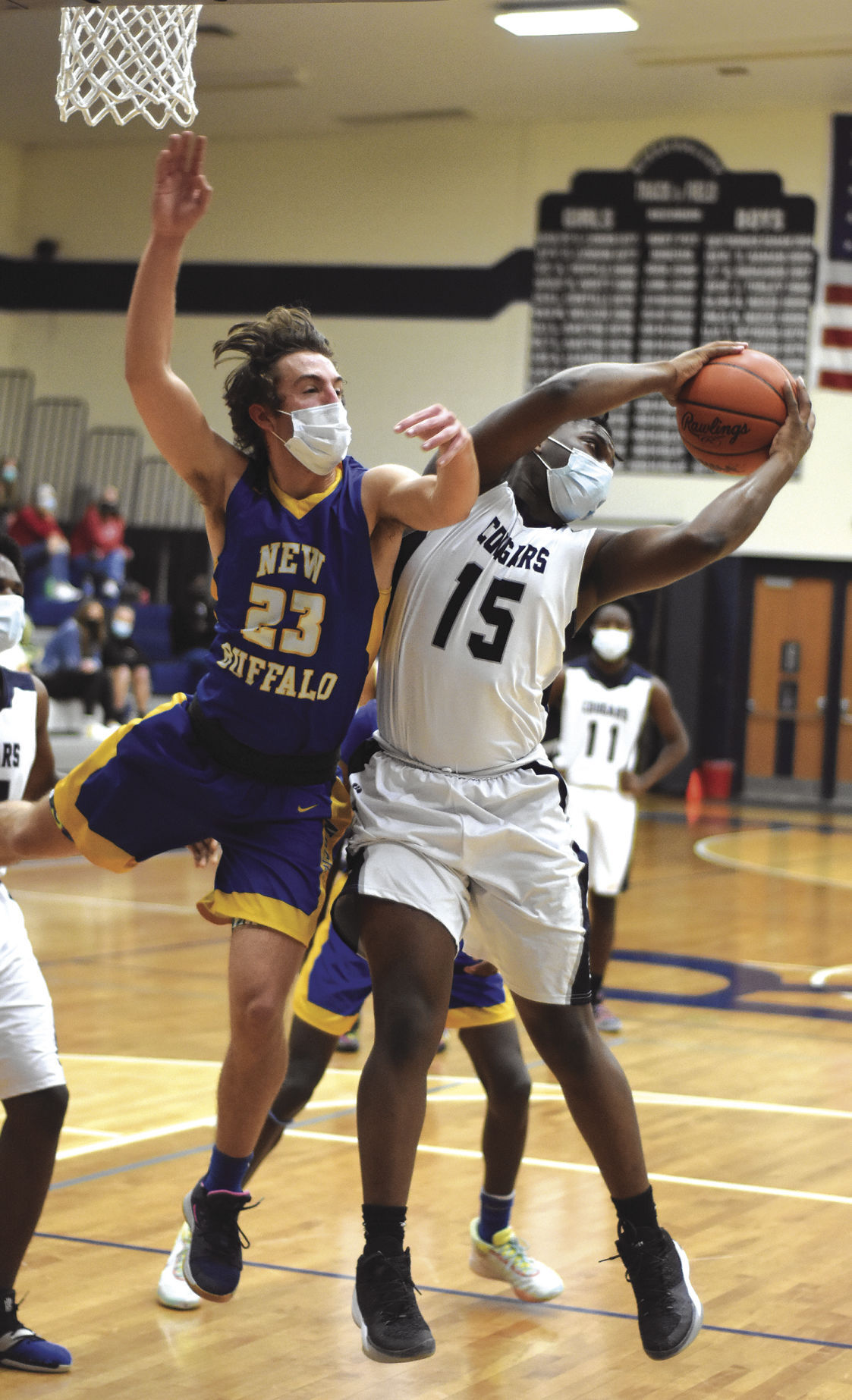 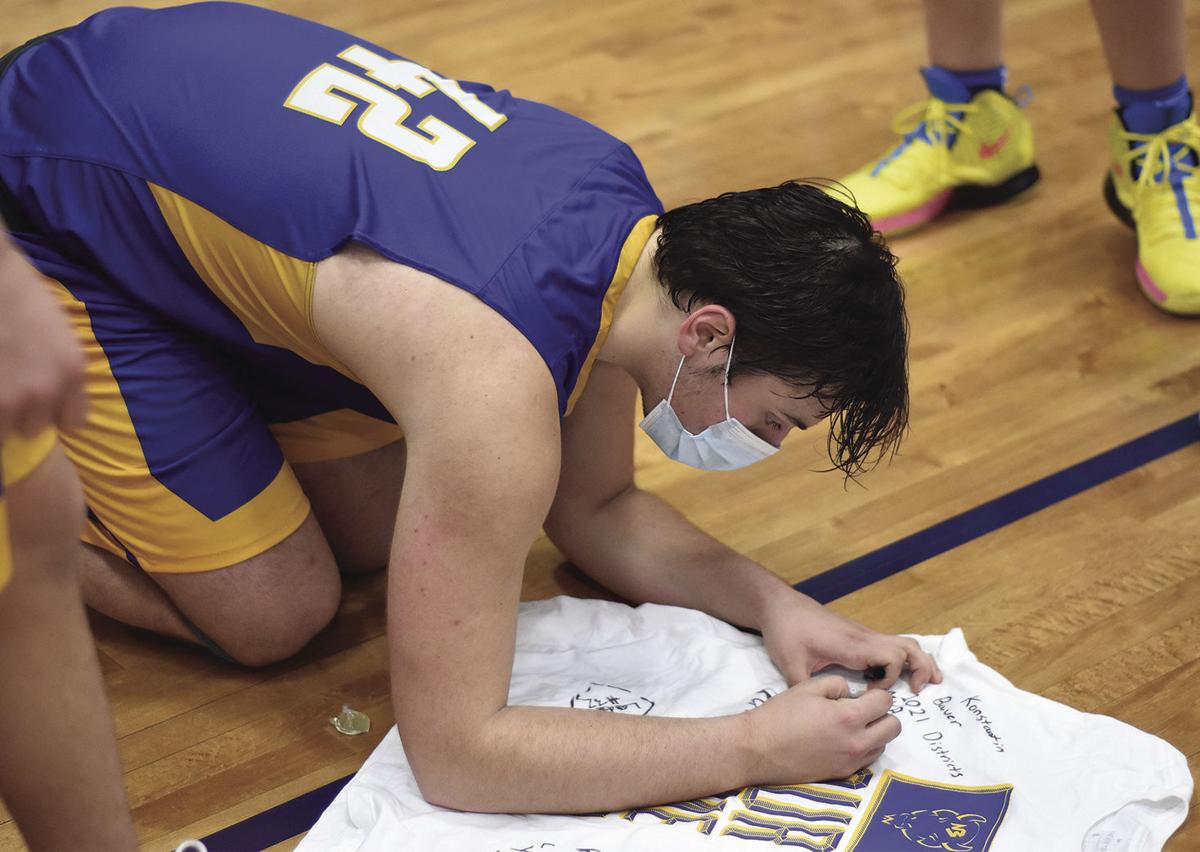 ABOVE: Ryan Vinson signs a T-shirt for injured New Buffalo teammate Konstantin Bauer after the Bison won the district title on March 27. 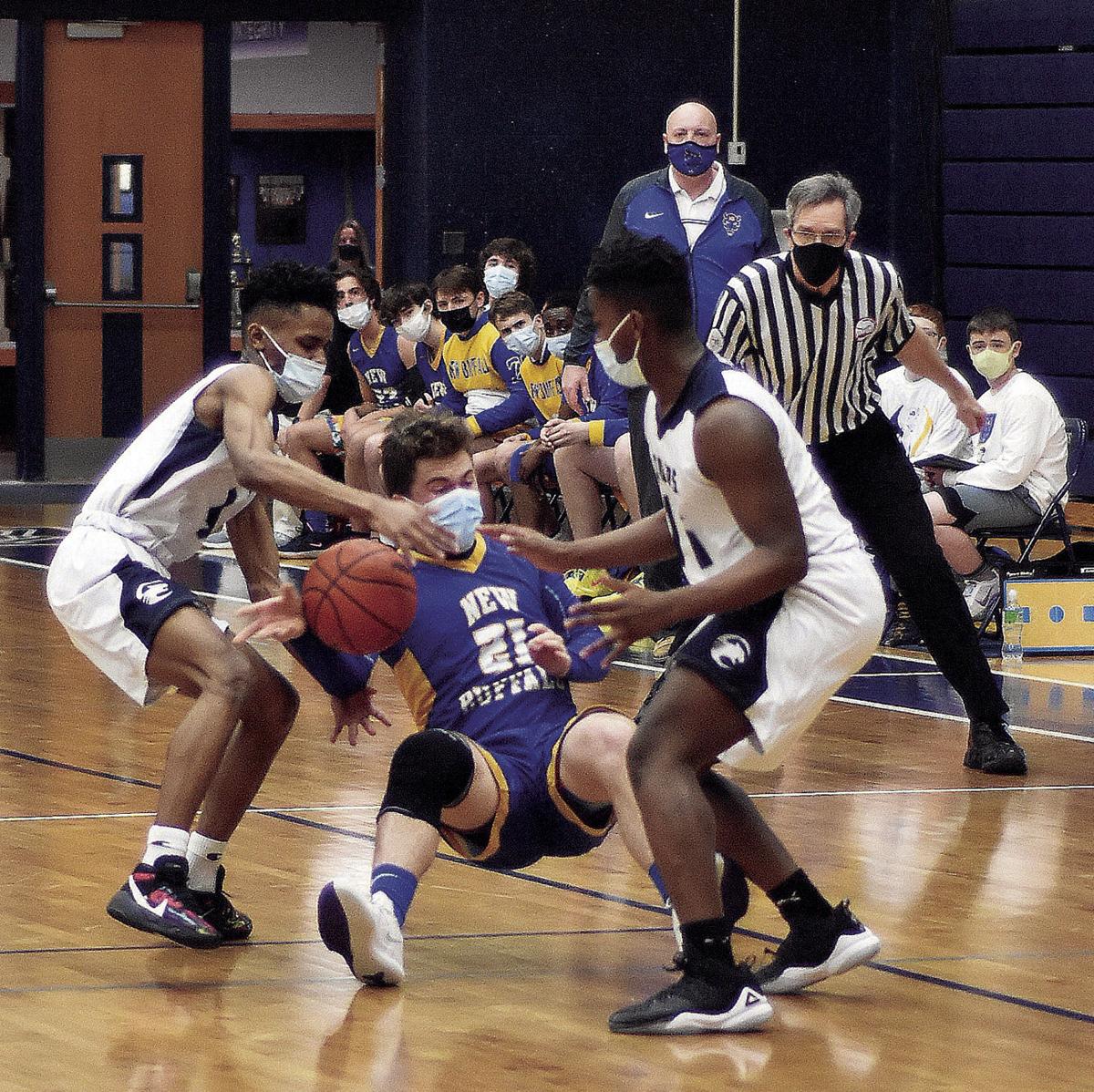 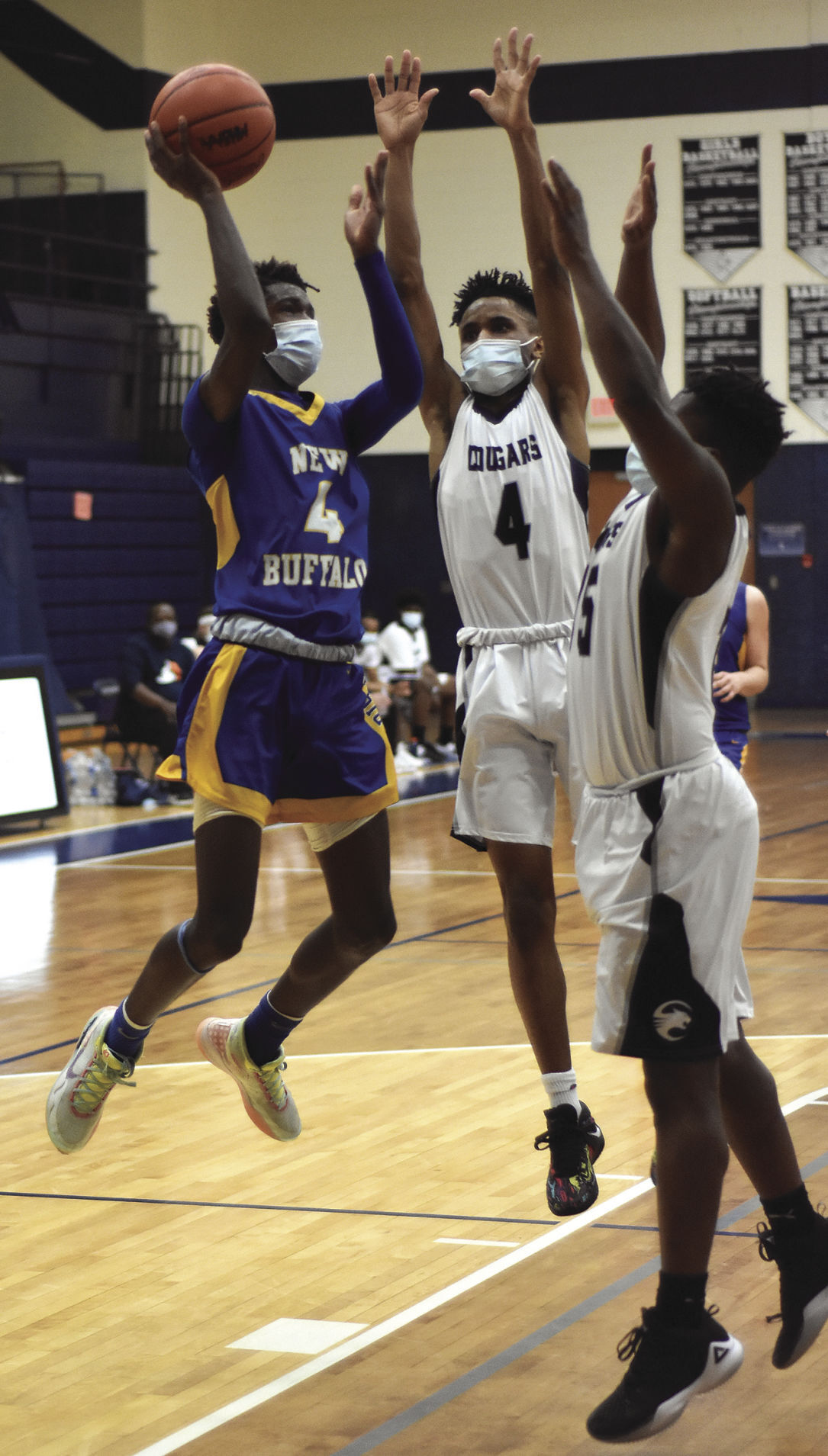 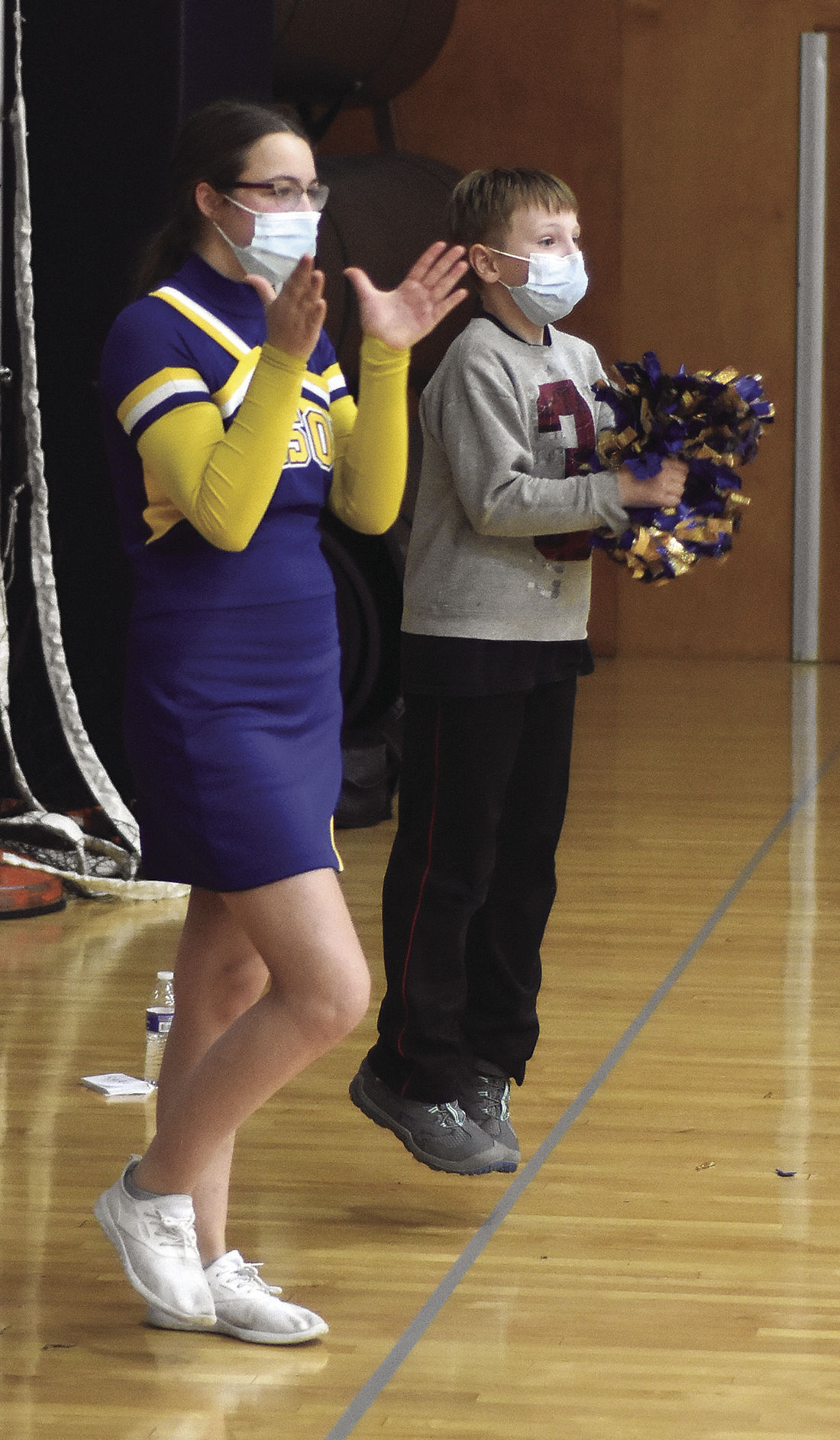 Addison and Miles Tripp get fired up after the first half of New Buffalo’s district title contest ends on a high note. 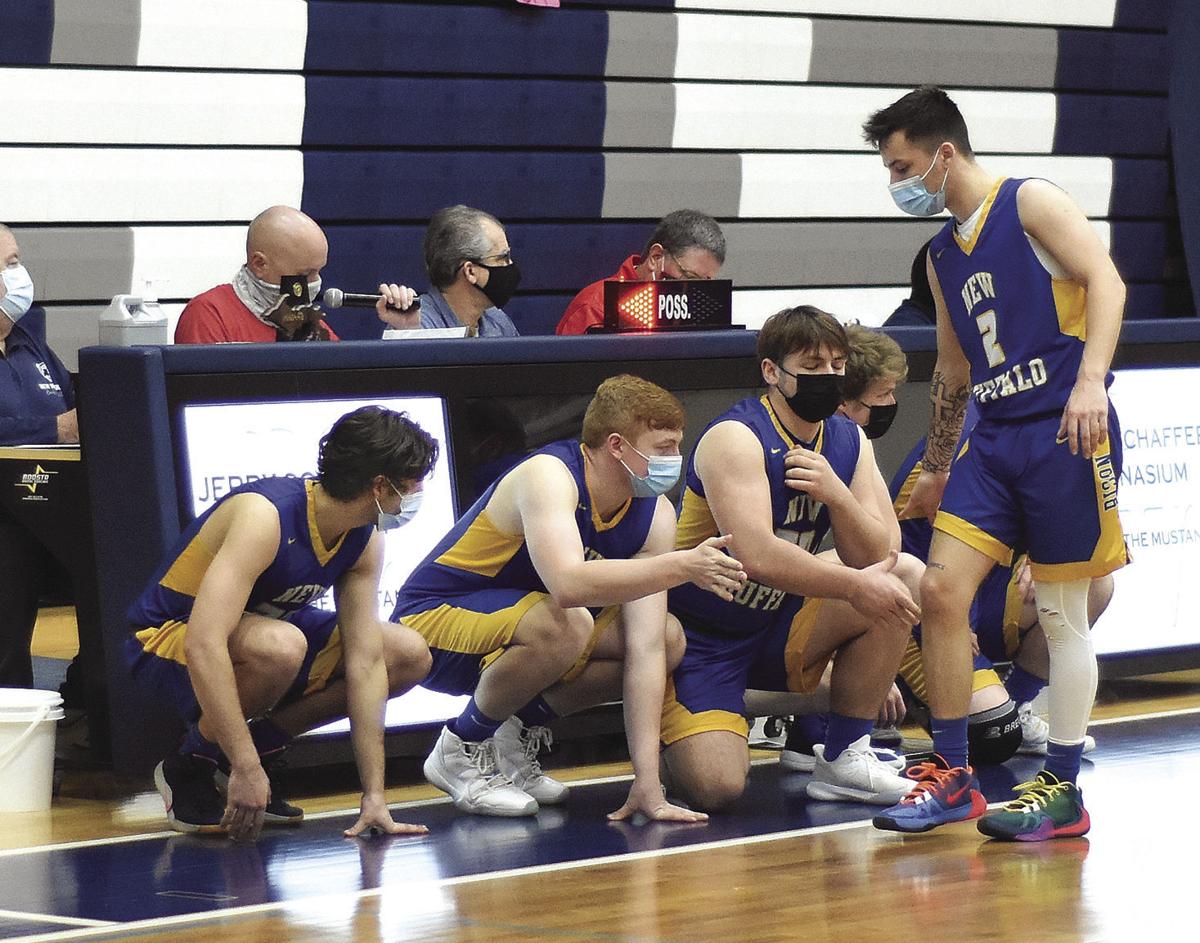 Kaden Parmley (right, standing) welcomes a new group of Bison playersa to the court in the late going of the March 27 DIvision 4 district title game. 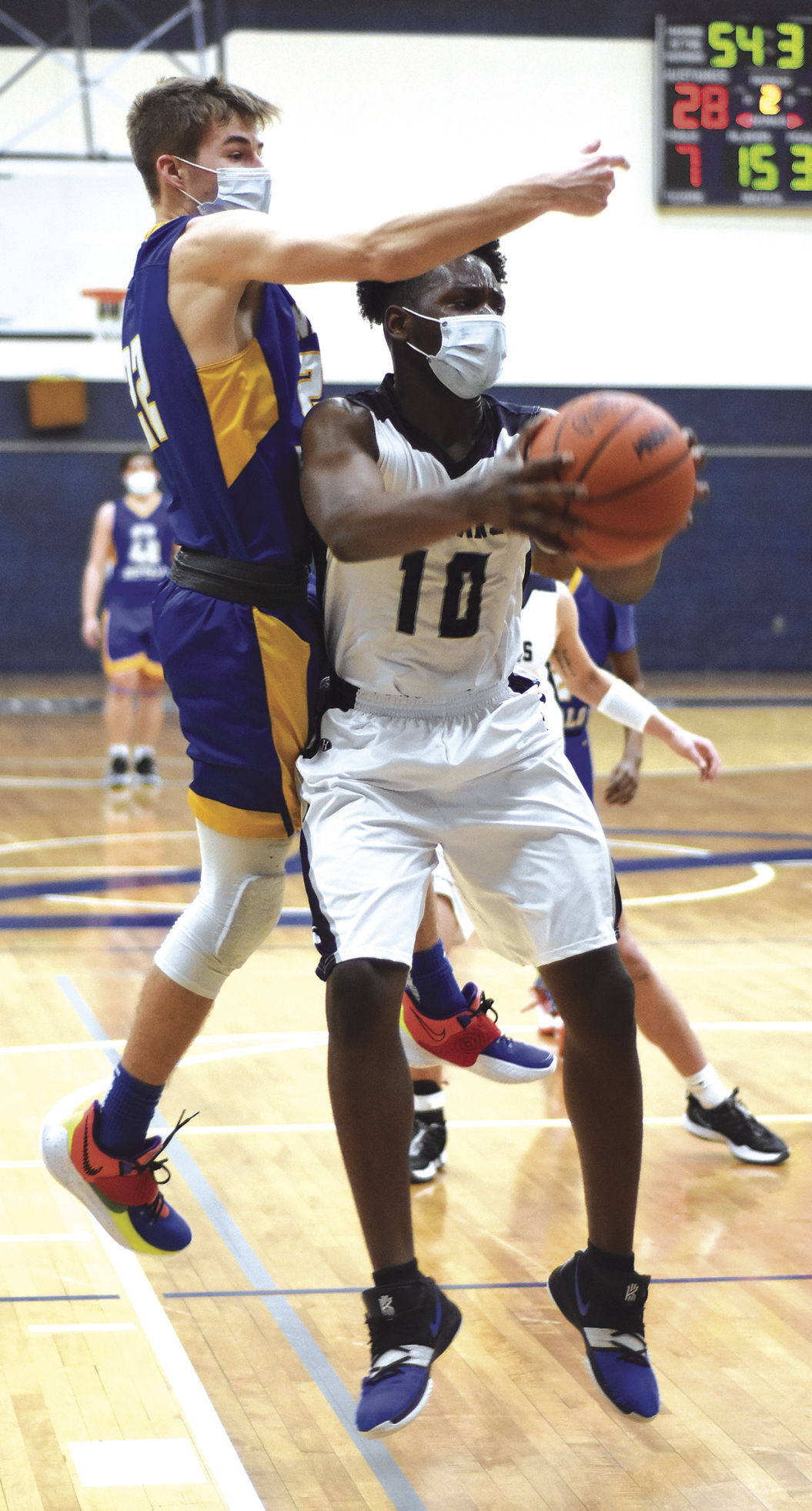 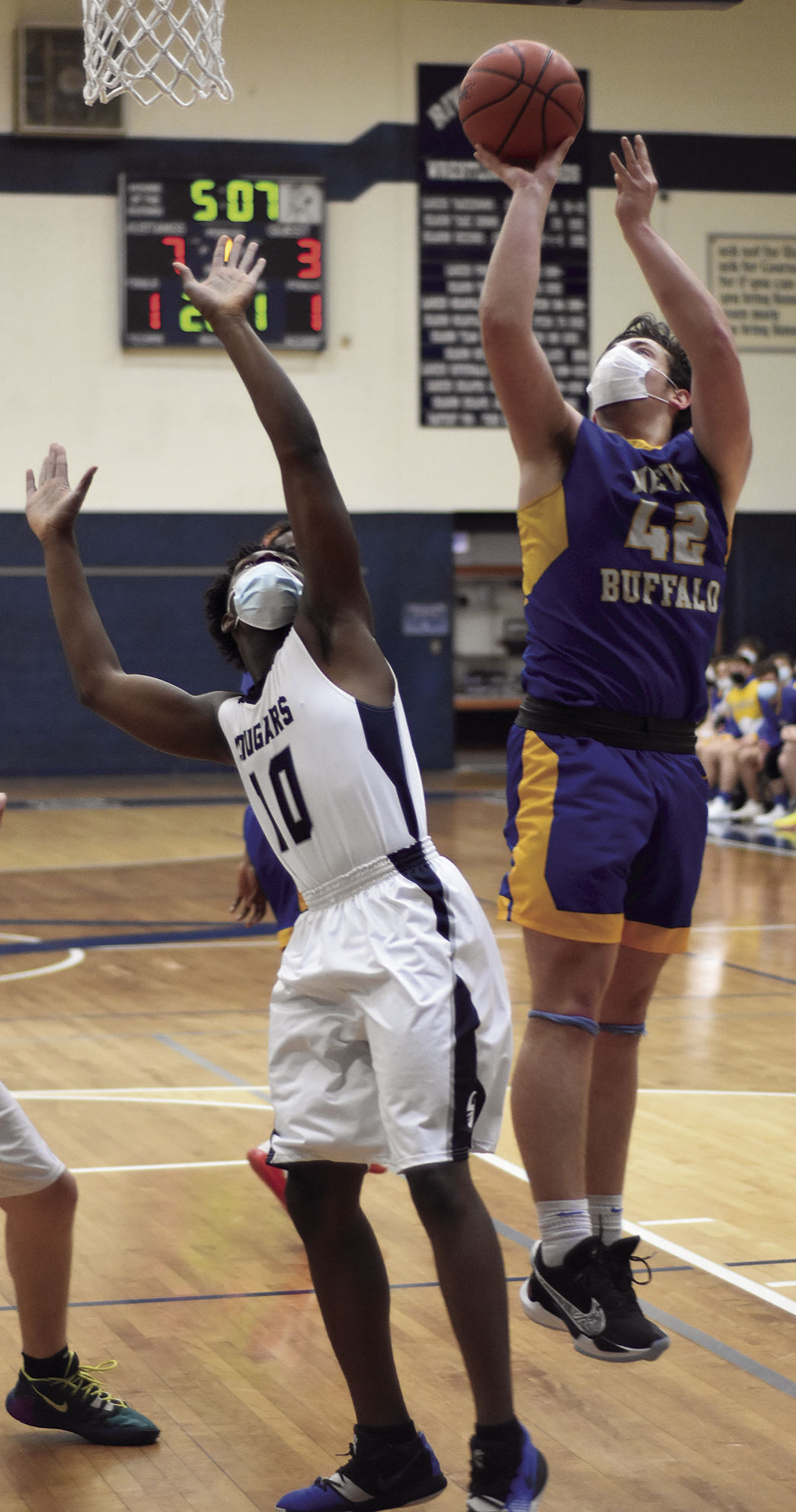 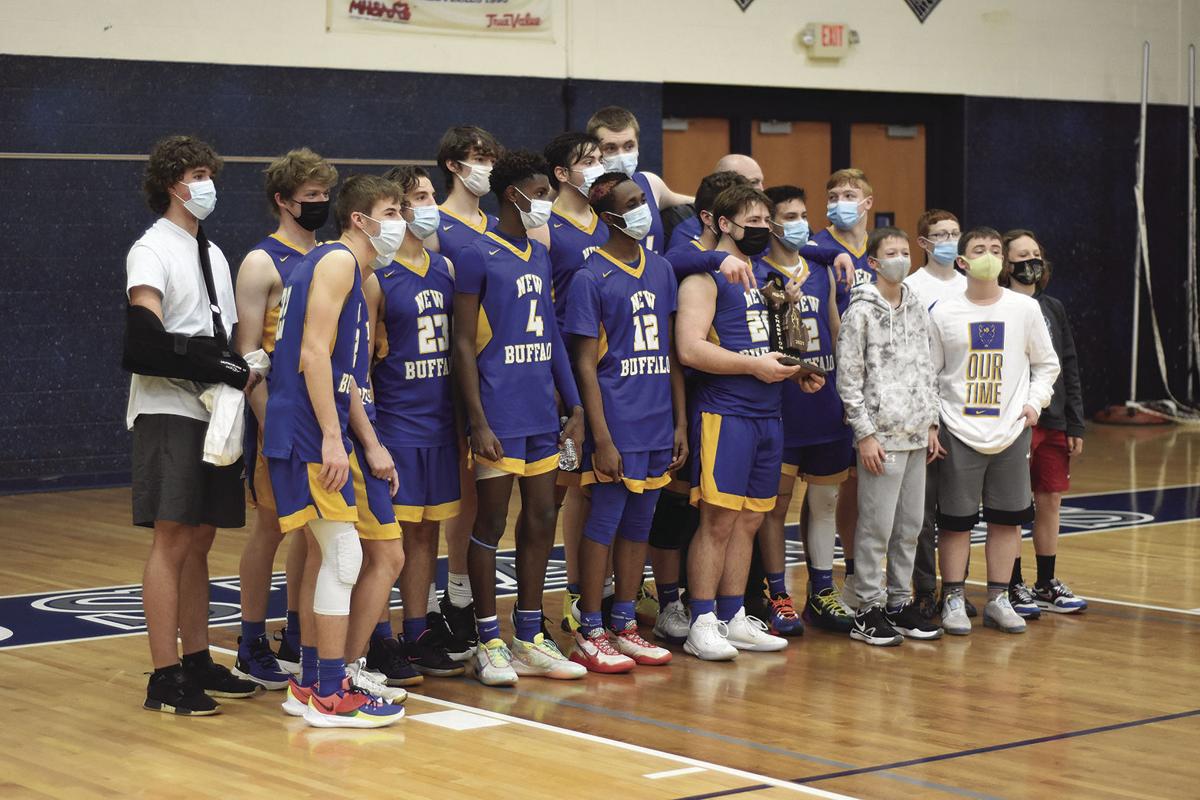 Posing with the trophy.

ABOVE: Ryan Vinson signs a T-shirt for injured New Buffalo teammate Konstantin Bauer after the Bison won the district title on March 27.

Addison and Miles Tripp get fired up after the first half of New Buffalo’s district title contest ends on a high note.

Kaden Parmley (right, standing) welcomes a new group of Bison playersa to the court in the late going of the March 27 DIvision 4 district title game.

Posing with the trophy.

The Bison out-scored the Cougars 29-9 in the third frame en route to a 83-55 victory in River Valley’s Jerry Schaffer Gymnasium.

The Bison entered the second half leading 38-31 after Shaw ended quarter number two by swishing a buzzer-beating three-pointer.

It didn’t take New Buffalo long to open up a double-digit advantage as scores by Anthony Lijewski, Vinson and Jeremiah Mitchell upped the margin to 46-35.

The Bison kept rolling along in the third period as a series of drives to the hoop by Mitchell, Kaden Parmley and Shaw pushed the lead past 20 points (58-37) with 3:07 left.

Completing NB’s 29-9 domination of the the third frame were baskets from Mitchell, Vinson and Parmley, followed by the exclamation point of a Parmley “3” that left the Cougars looking up at an imposing 67-40 deficit heading into the final stanza.

“We came out strong in the third quarter — probably one of our best quarters of the year,” Parmley said.

Parmley would open the fourth quarter with another three-pointer to make it an even 30 points (70-40). Countryside was able to edge New Buffalo 15-13 down the stretch — a figure that left the final tally 83-55 in the Bison’s favor.

Scores from Vinson, Shaw and Lijewski (a “3”) kept New Buffalo close, with Mitchell’s three-pointer late in the opening period cutting the margin to a single point (19-18), but Brown’s late field goal kept the Cougars on top 21-18 after one quarter of play.

The Bison took their first lead of the game (26-25) with five minutes left in the first half thanks to consecutive scores by Vinson and Mitchell. They would not trail again.

New Buffalo went on to score the next eight points on baskets from Shaw, Mitchell and Vinson to open up a 34-25 advantage.

Countryside had whittled the margin down to 35-31 as Ja’varius Gordon and La’marion Grodon sank shots, but Shaw launched a half-court shot just before time expired and it found nothing but net.

Brown paced the Cougars with 13 points.

“We all played together as a team,” Lijewski said, adding that coach Nate Tripp “gave us a nice half-time speech, and we came out and played basketball.”

Tripp said he felt the Bison didn’t match Countryside Academy’s intensity in the first half before they settled down “and started playing our brand of basketball.”

“We started moving the ball a little bit better, and shots started falling,” he said.

Senior Sean Gordon noted that the Bison had a good game plan going in and “did the drills all week.”

New Buffalo advanced to the championship game by topping Lake Michigan Catholic 66-36 in a March 25 district semifinal contest. The Bison had opened up a 28-6 lead after one quarter.

The Bison (13-4) took on Howardsville Christian in a March 30 regional semifinal contest at Niles High School. The Eagles eked out a 53-49 victory to advance to an April 1 regional final match-up with Tri-Unity.

Howardsville (14-3) built a 12-point lead (43-31) early in the fourth quarter before New Buffalo rallied to pull within four points (Parmley tallied 15 of his game-high 22 points during the final period).