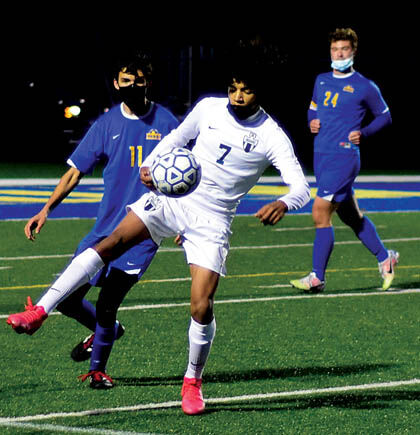 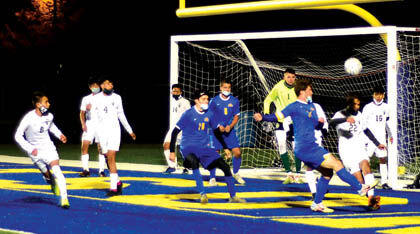 New Buffalo and Hartford players go after the ball in front of the Hartford goal in the late-going of the District opener.

New Buffalo and Hartford players go after the ball in front of the Hartford goal in the late-going of the District opener.

Kevin Parra scored the game's lone goal with about 5 minutes remaining in the first half (Alexis Rivas was credited with the assist).

Hartford made a strong bid to extend that lead in the second half, but Bison goalkeeper Josh Keen came through with a series of saves.

As the match went on New Buffalo began to go on the offensive, taking several strong shots in the late-going.

"We wanted to keep it close and give ourselves a chance at the end," said New Buffalo head coach Erik Beers. "We gave ourselves a couple of chances … I'm real happy with the way we played."

Bridgman's season also ended on Oct. 20 as Michigan Lutheran topped the Bees 3-0 in a Division 4 semifinal.

Christian Kisukulu scored two goals for the host Titans. Alex Ritter had a goal and an assist.

Weston Busick had nine saves for the Bees.

Lutheran went on to top Hartford 4-3 in the Oct. 24 district title match.