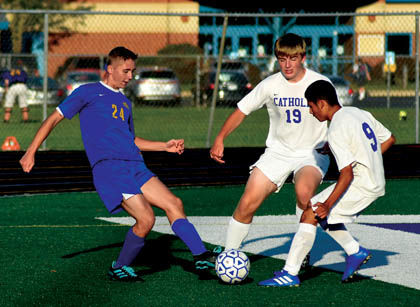 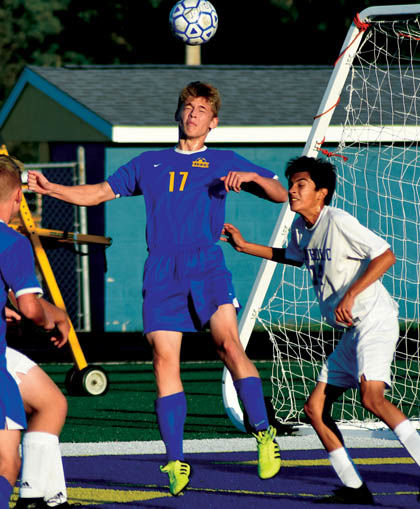 Jacob Nerada uses his head during the Oct. 8 BCS White Division match against the Lakers. 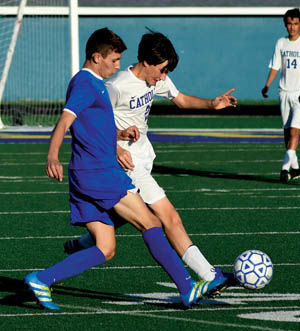 Tucker Morse of New Buffalo battles for posession during the Oct. 8 match against LMC. 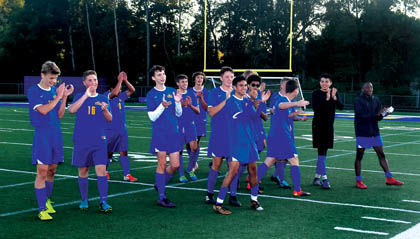 Jacob Nerada uses his head during the Oct. 8 BCS White Division match against the Lakers.

Tucker Morse of New Buffalo battles for posession during the Oct. 8 match against LMC.

The Bison topped Lake Michigan Catholic 8-0 to finish a half-game ahead of runner-up Covert in the BCS White Division standings.

The two squads split their regular-season matches, with the Bison winning all of its other contests except for an early season tie at Howardsville Christian. Covert finished with two losses.

“We’ve been working for this all season. It came down to this game,” said Cole Haskins. “This is where we wanted to be and it feels good to be here now.”

Matthew Bayonne had three first-half goals while Nick Keen scored twice and Miguel Mercado also booted it in on a breakaway opportunity to open up a 6-0 margin at the half-way point.

Following a Senior Night ceremony recognizing the team’s many 12th-graders, New Buffalo ended things early via the 8-goal mercy rule thanks to goals by Ian Cawley and Tucker Morse.

“We all work so well together, we’re such a good team … We made history of the school and that’s going to impact New Buffalo soccer,” said Bayonne.

Coach Erik Beers said he was really happy for the team’s eight seniors.

Following the win over LMC, Beers warned his players how tough it is to beat the same team three times in a season, and those words proved prophetic as the Bison edged Michigan Lutheran 1-0 in a Division 4 District Tournament opener played on Oct. 10.

Nick Keen scored in the last minute to avert overtime.

New Buffalo edged Covert 2-1 in an Oct. 15 District Semifinal match at Hartford. The district title matchbetween the Bison and Hartford is set for 5 p.m. Oct. 17 in Hartford.