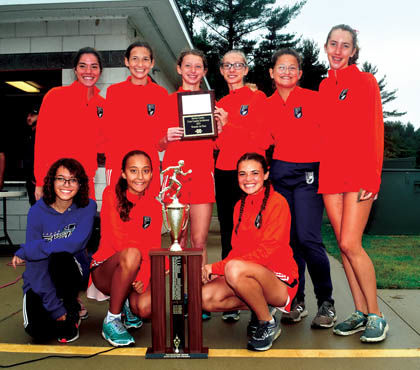 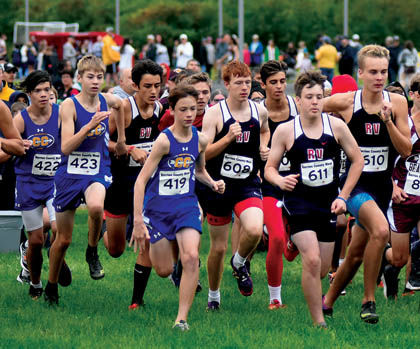 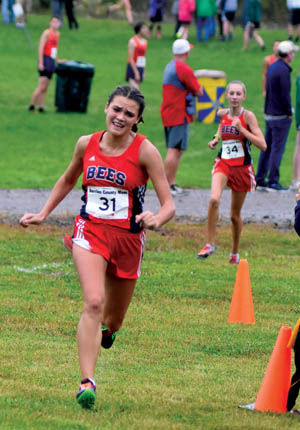 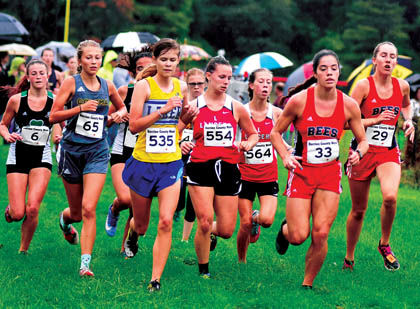 A scene from the high school girls race at the Sept. 28 Berrien County Cross Country Meet. 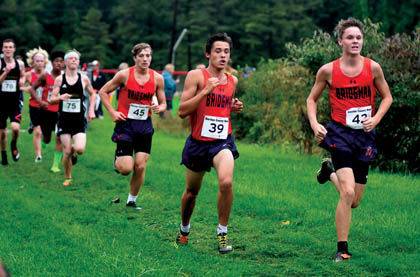 A scene from the high school girls race at the Sept. 28 Berrien County Cross Country Meet.

BENTON TOWNSHIP — The Bridgman High School girls cross country team has not lost a meet all season, and that trend continued Saturday, Sept. 28, at the Berrien County Cross Country Invitational as the Bees captured their first-ever girls county title.

The meet, originally scheduled to be held at Riverview Park, was moved to Lake Michigan College’s Benton Harbor campus due to growing concerns over Eastern Equine Encephalitis.

Bridgman’s girls scored 54 points to claim the county crown. Lakeshore and Berrien Springs each scored 79, with Lakeshore taking the tiebreaker based off its sixth runner’s finish. St. Joseph was fourth with 87 (the Bears had won nine straight Berrien County girls cross country titles), and Niles scored 95 for fifth.

“We knew coming in we were going to have a lot of tough competition, so this is a really big win for us,” said Mikaela Owen, Bridgman’s lone senior on the girls’ side.

The rain that had been falling through the night let up in time for the races, but the course was plenty soggy.

“The last mile, it was so muddy … you just had to push through,” said Bridgman’s Jane Kaspar, who nevertheless said she ran a personal-best time.

“I told them they need to get out and just race today and not worry about times. And that’s what they did, they did what they needed to do,” said said Bees coach Spencer Carr

Hackett surged past Emily Peters of Lakeshore right before the finish line, gaining a lot of ground in the last stretch of the race.

“I aways try to catch the girl in front of me … she was pretty far but I kicked it in and got her at the end,” Hackett said.

“I really wanted to defend my title,” Thompson said. “I didn’t want to go from being a junior and being county champ to being a senior and fall off. My strategy was just go out fast like I usually do. I just stay strong and try to keep my miles as consistent as possible.”

Lakeshore and Berrien Springs tied with 79. Lakeshore claimed the tiebreaker with a higher overall finish from its sixth runner, Myah Frazier.

“I knew we’d have to have a perfect race to catch Bridgman, but I figured we could get second,” Lakeshore coach Beau Deja said. “We just pack up. We pack and attack. All the girls ran well. My sixth place is the heart and soul, so Myah Frazier, she’s the reason we got second. In a tiebreaker she’s the difference.”

Freshman Emily Peters was the Lancers’ front-runner, placing fifth in 20:43.0. Moore led the Shamrocks with a third-place overall finish.

Berrien Springs dominated the boys race to claim a second straight county title, placing eight in the top 25 to post a low score of 33. Six of the Shamrocks’ top eight runners finished with season-best times.

Second-place St. Joseph tallied 77 points, Watervliet was close behind with 79, while Lakeshore (116) and Bridgman (125) rounded out the top five.

The boys side also saw a repeat individual champion. Berrien’s Ashton Sheline took the race in 16:50.5. Sheline and Lakeshore’s Race Bettich were stride-for-stride for the first 2 1/2 miles, but Sheline eventually pulled away, finishing just ahead of Bettich’s 16:55.5. “I was really excited to come out here and race (Bettich),” Sheline said. “I knew that, since we had been racing each other a lot this season, that it would be really close out here to see who would come out on top. I’m really excited to come out and defend my title again.”

Bridgman’s Luke Blesy led the Bees with an eighth-place finish and time of 17:38.9.