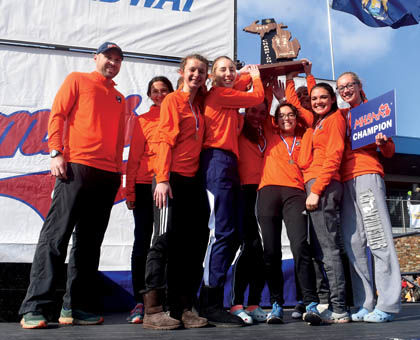 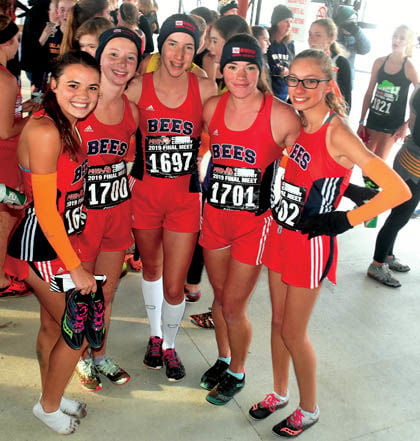 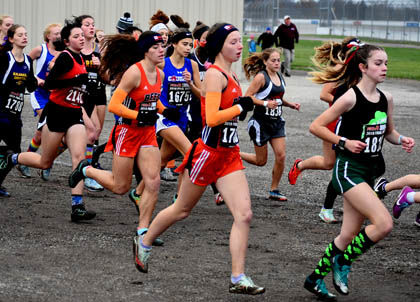 Jane Kaspar and Mikaela Owen (center, from right) shortly after the start. 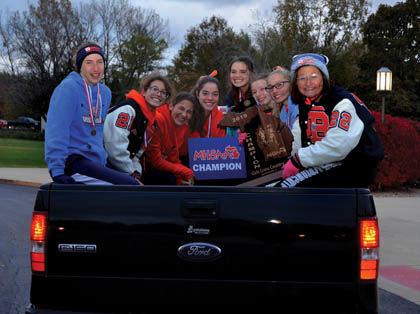 The Bees arrive at Bridgman High School on Saturday, Nov. 2, at the conclusion of a victory parade through town celebrating their state cross country championship. - photocourtesy of Molly Owen 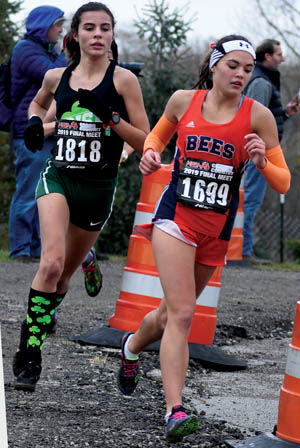 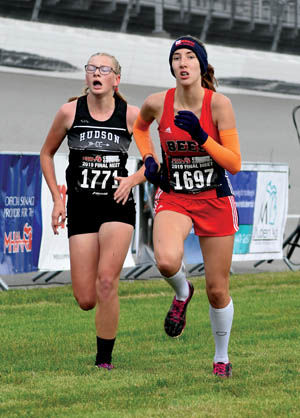 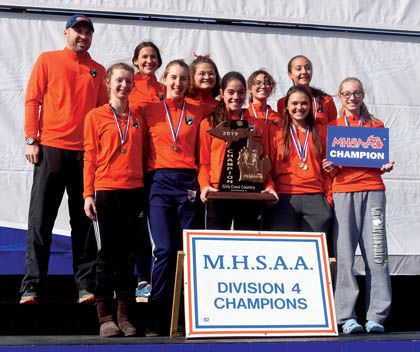 Jane Kaspar and Mikaela Owen (center, from right) shortly after the start.

The Bees arrive at Bridgman High School on Saturday, Nov. 2, at the conclusion of a victory parade through town celebrating their state cross country championship. - photocourtesy of Molly Owen

The Bees’ tally of 132 points in the Division 4 state race at Michigan International Speedway was 16 points better that runner-up (and four-time defending state champion) Mt. Pleasant Sacred Heart (148 points). Kalamazoo Christian (the only team to defeat Bridgman during the regular season — by a one-point win in the Portage Invitational) took third with 174 points.

“At the beginning of the season I knew we had something. I was thinking top 10, top 5 would be a great session,” said Bridgman coach Spencer Carr. “They exceeded all expectations. Once we got to Portage and were one point from winning there, and we won at New Prairie, at that point we knew we had something special.

“They came though today and ran some great races — and we won.”

“It’s just incredible to be able to experience this, as a senior especially,” said Owen, the squad’s only 12th-grader. “I was so proud of my team and how hard we worked this year.”

Owen can now add a team state title to a pair of individual ones — she won the 100 and 200 at this past spring’s Division 4 state track finals.

Stewart, a junior who was All-State in 2018 with a 24th-place showing, said she started out fast and that helped her in the race.

“I kind of just kept that pace, and running with the pack really helped too.”

Stewart was in a lead pack for much of the race that was missing just one runner — race winner and defending individual champ Abby VanderKooi of Muskegon Western. Her first-place time of 18:11 win more than a minute ahead of runner-up Riley Ford of Mariette (19:22.7).

“It’s been like the best season ever,” said Hackett, a sophomore who joined the team this year. She later called the jumbo-size championship trophy “the greatest thing ever.”

“I knew they were behind me the whole race, and on the curve, I kind of had to kick it way early,” Hackett said. “I had to run really fast on the last strip for a while to keep ahead of them. I’m really proud of myself for holding my spot and not letting anyone pass me on the last stretch.”

Fast, a freshman, moved up steadily through the field as the race went on.

“I felt like I was dying, but I felt like ‘I’ve got to keep pushing for my team,’” she said.

Kaspar said the course was “really muddy,” but everybody on the team was excited going in and that helped them all do well.

Among the many parents, relatives, students and community members who made the trek to Brooklyn to support the Bees was longtime cross country coach John Wismer (he retired after the 2016 season and coached some of this year’s runners including Stewart as middle-schoolers).

“It’s just incredible … I love this family atmosphere, the parents have always been so supportive,” he said.

Bridgman High School hadn’t won a team state championship since 1987, when it claimed titles in both baseball and boys golf. This year’s girls squad is the first to claim a state-wide crown for the Bees.

Bridgman’s boys team also competed at state, finishing 11th (it was noted during the awards ceremony that the Bridgman girls had placed 15th the previous year).