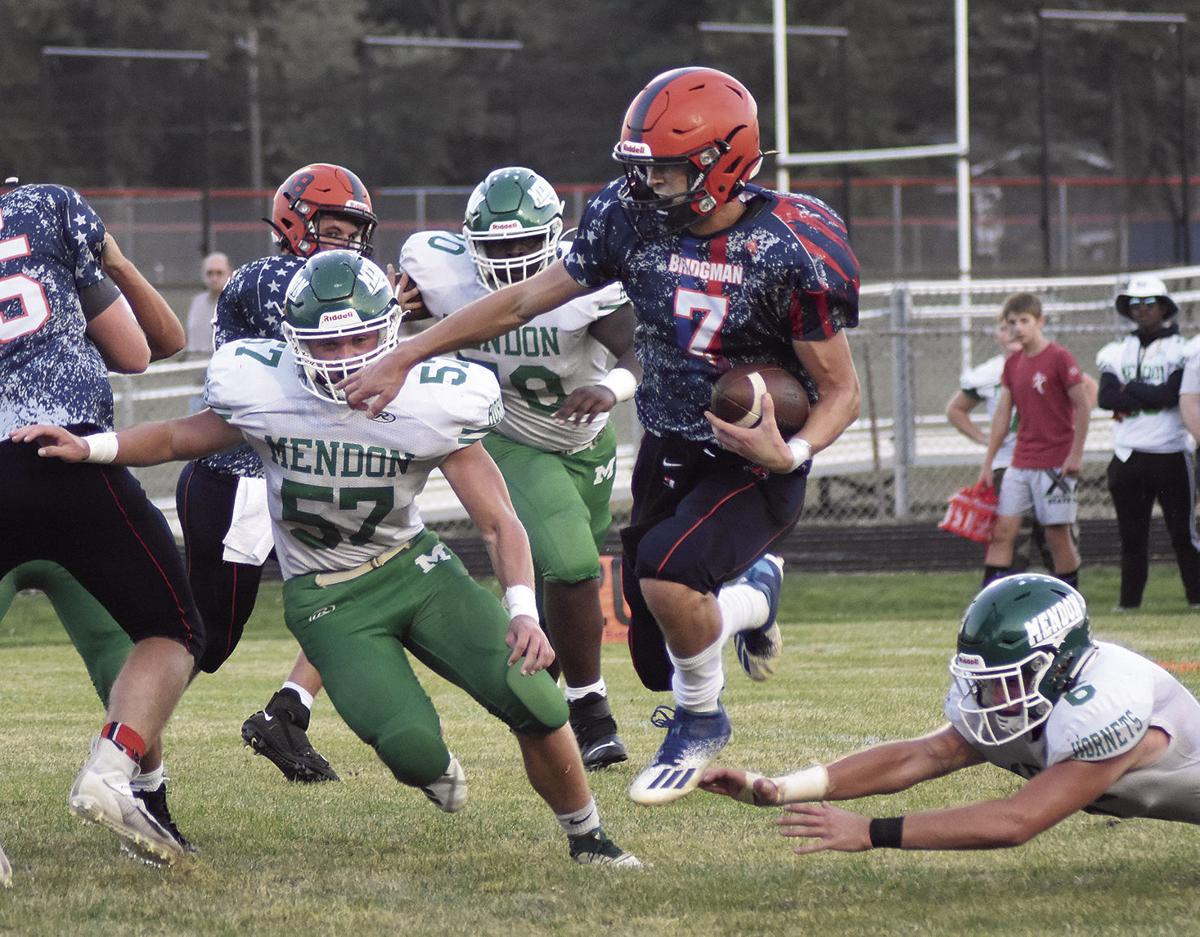 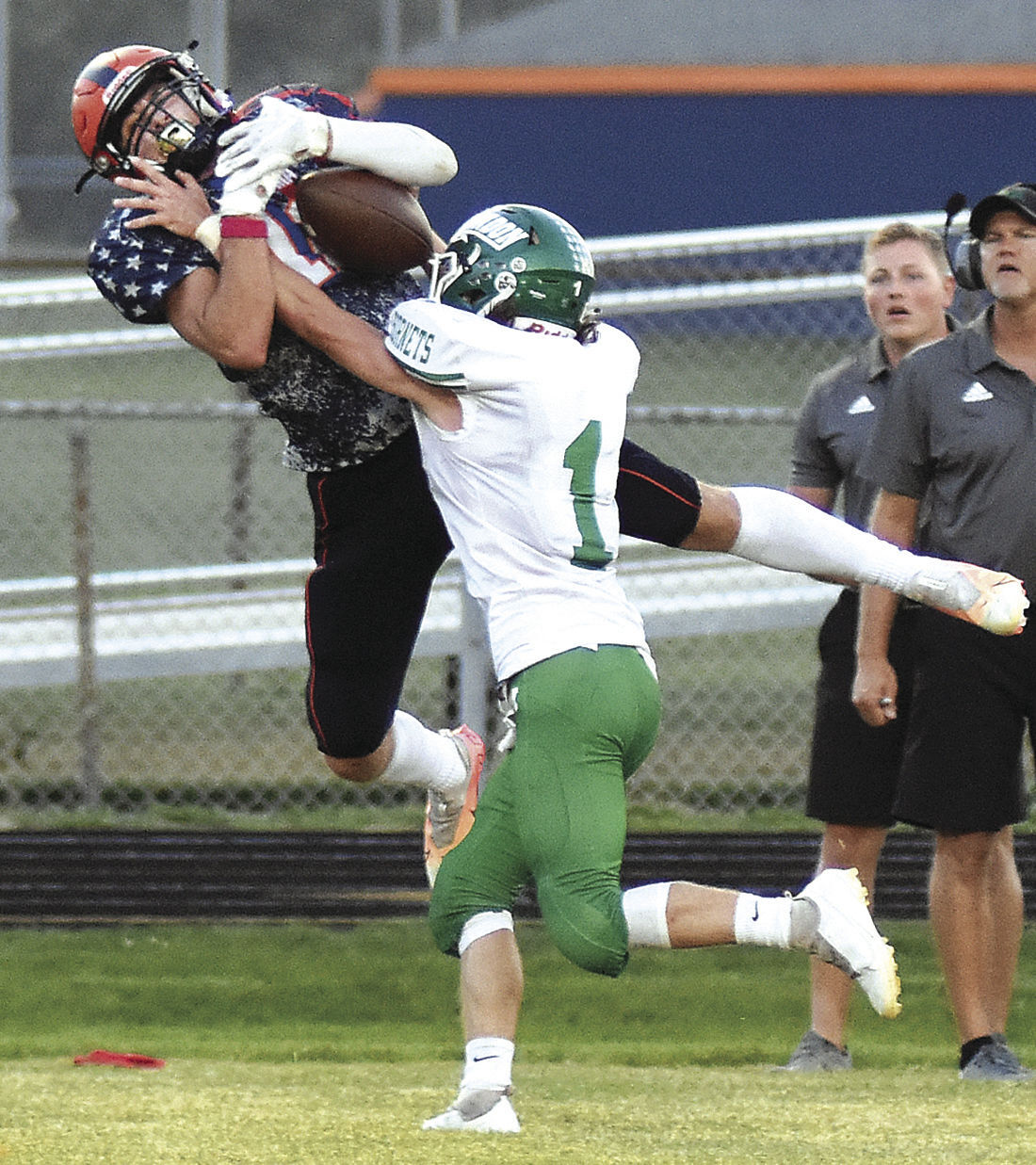 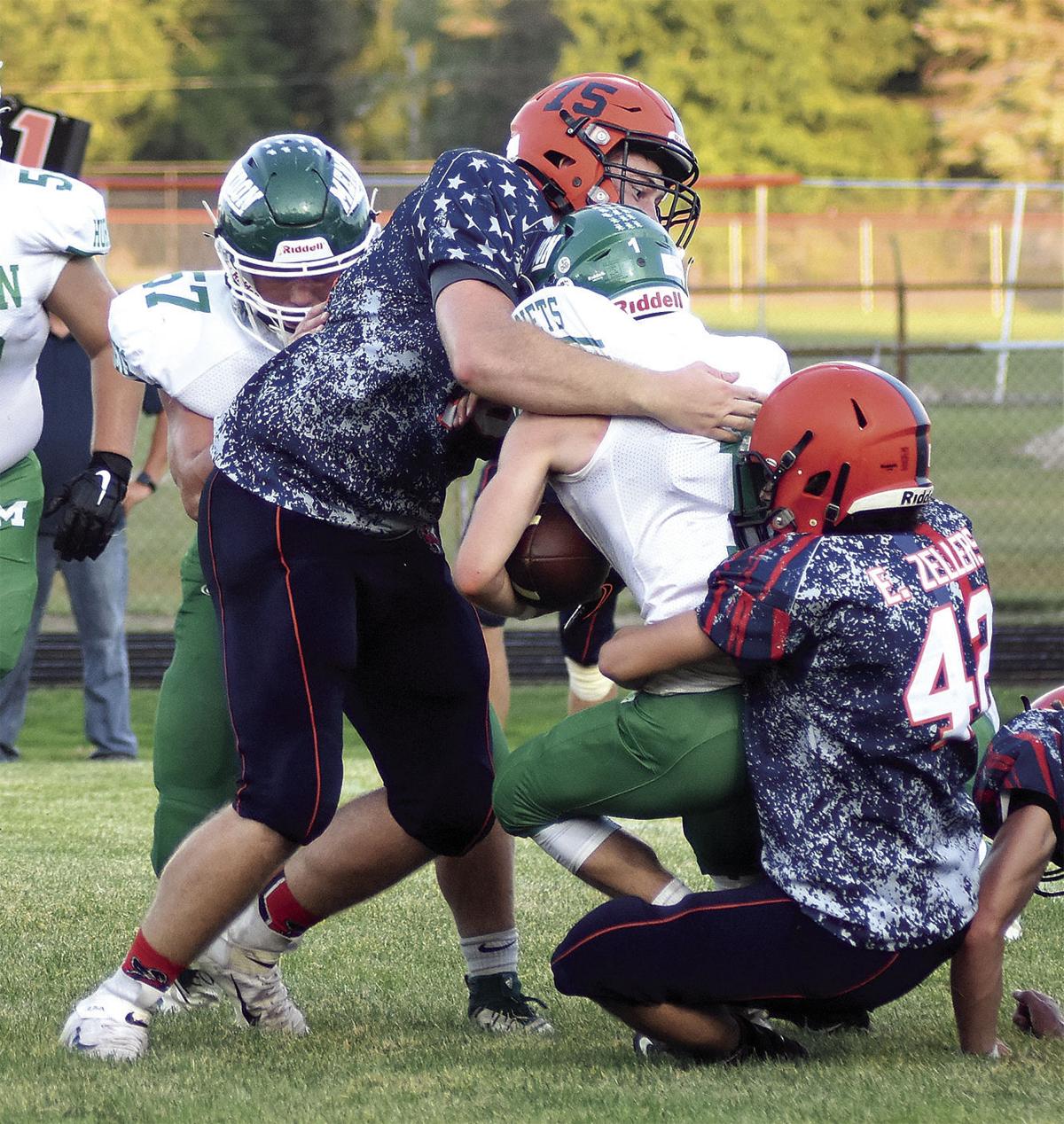 Zach Teed of Bridgman stuffs a Mendon run play during the Sept 17 game. 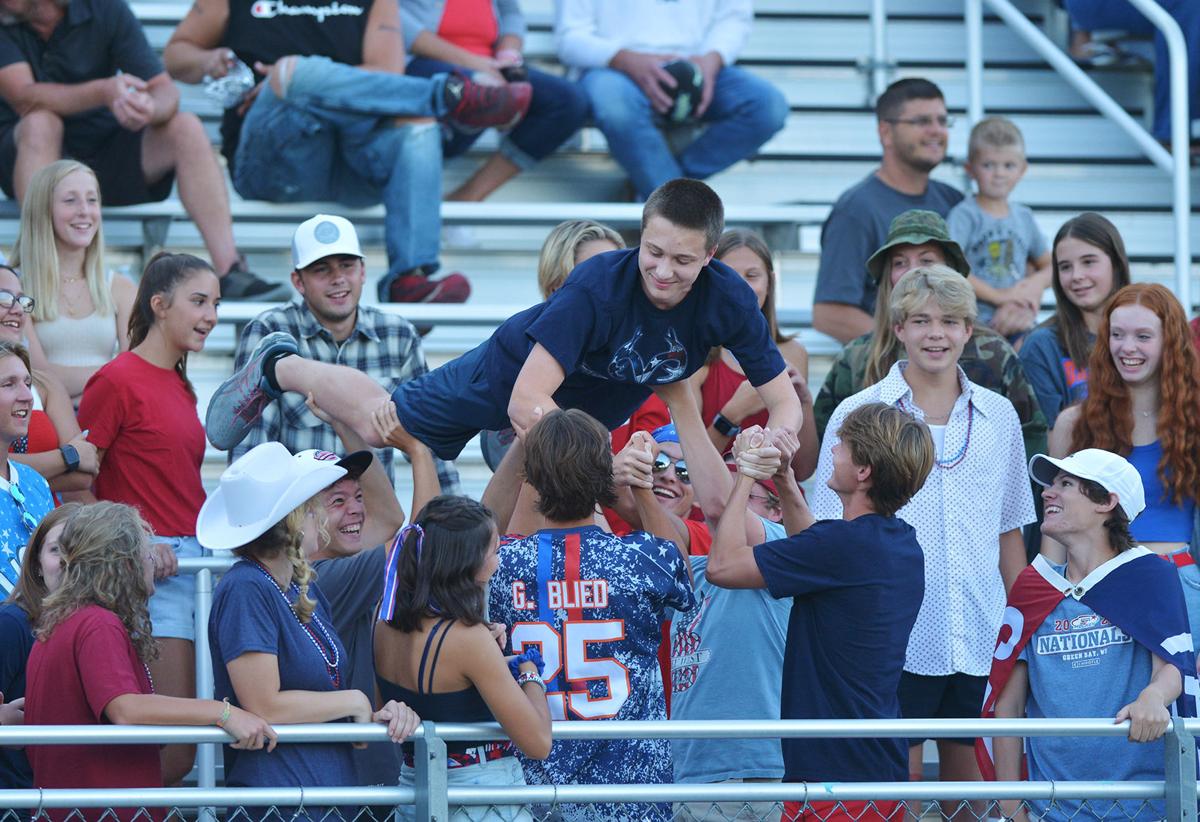 Bridgman fans do push-ups after the Bees score during the first half of Friday night’s game against Mendon in Bridgman. 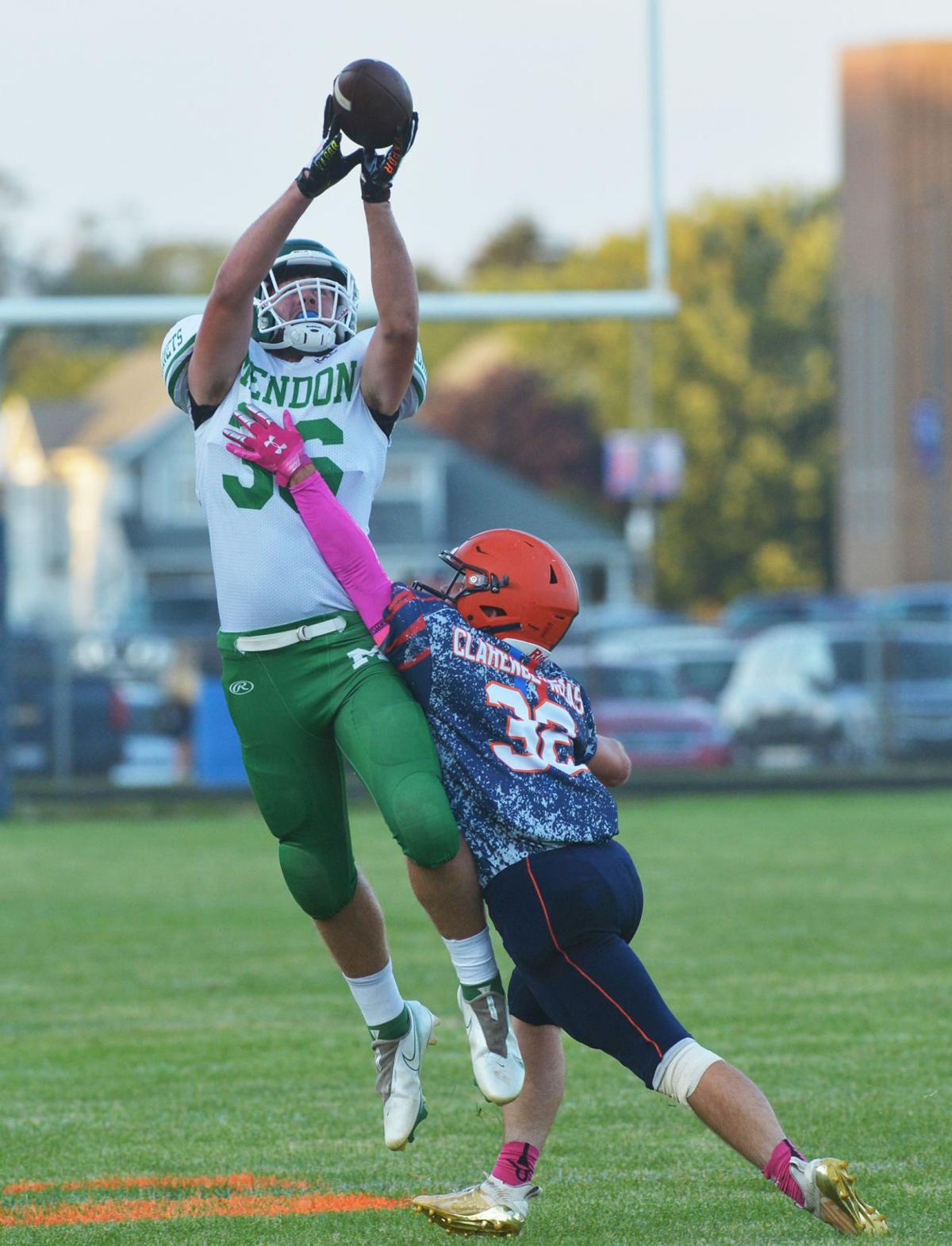 Bridgman’s Nate Necas defends against Mendon’s Gabe Haigh during the first half of Friday night’s game in Bridgman. 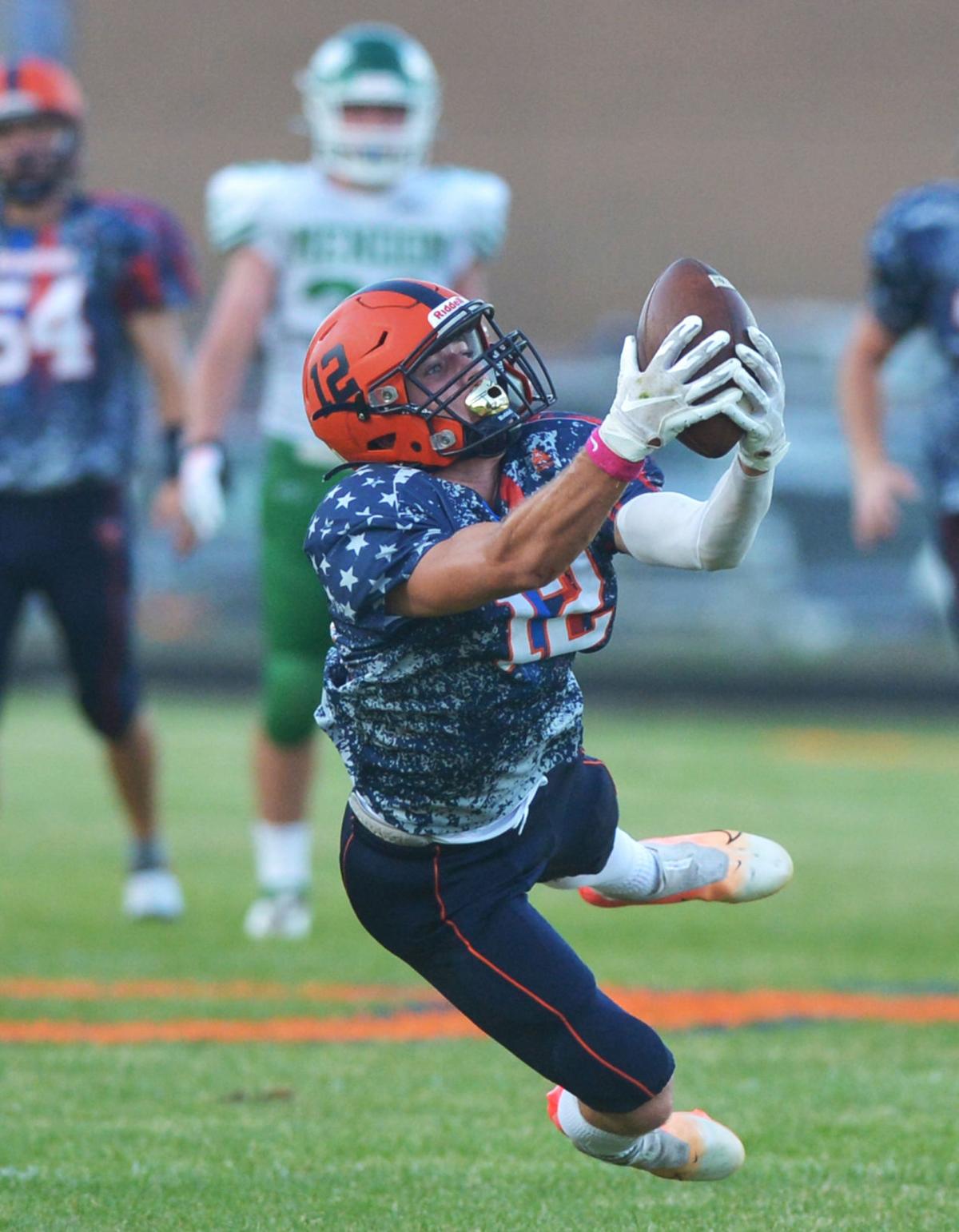 Bridgman’s Jayce Warren pulls in a reception for a big gain during the first half of Friday night’s game against Mendon in Bridgman.

Zach Teed of Bridgman stuffs a Mendon run play during the Sept 17 game.

Bridgman fans do push-ups after the Bees score during the first half of Friday night’s game against Mendon in Bridgman.

Bridgman’s Nate Necas defends against Mendon’s Gabe Haigh during the first half of Friday night’s game in Bridgman.

Bridgman’s Jayce Warren pulls in a reception for a big gain during the first half of Friday night’s game against Mendon in Bridgman.

BRIDGMAN — Bridgman held Mendon’s record-breaking offense scoreless while putting up some huge numbers of its own on Friday, Sept. 17.

The Bees rolled to a 45-0 victory over the sixth-ranked Hornets in a non-conference eight-player football showdown. Bridgman quarterback Reid Haskins rushed for 256 yards and six touchdowns, and threw for 190 yards and a score.

Mendon (3-1) was coming off a 64-20 victory over Fennville in which it set eight-player football state records for total yards (678) and rushing yards (668). The Hornets did move the ball on Bridgman (4-0), gaining 265 total yards and reaching Bee territory on most of their possessions, but couldn’t get to the end zone.

“We had a really good game plan coming into the game,” Haskins said. “We just kept the intensity up all game and were never letting up.”

Haskins put Bridgman in command quickly. He raced for a 67-yard touchdown on the game’s second play from scrimmage, and after the Bees forced a Mendon punt, took off for a 71-yard score. By halftime, Haskins had eclipsed 200 yards rushing and 100 passing, and the Bees were up 32-0.

“The line did a really good job blocking and so did the receivers,” Haskins said. “Even if the main hole I was trying to run through wasn’t there, I was still able to find a hole because everyone kept going 100 percent and blocking downfield, which allowed me to get those big runs.

Haskins’ final touchdown run was perhaps his most impressive. Although it went for just 13 yards, he appeared to be bottled up on the right sideline for before cutting all the way back across the field to get to the end zone.

“You can see how he changes direction,” Locke said. “I’ve got to give credit to the receivers and the line. They block to the whistle and they know that even if they’re far away from the ball, they’ve got to keep blocking because Reid’s coming back that way. Same with Nate (Necas).”

Necas added 37 yards rushing, but hurt his ankle on a 33-yard reception. Though he returned to the game, the injury appeared to be bothering him as he slowed up and headed out of bounds on an 18-yard run. Jayce Warren had most of the receiving yardage for Bridgman, catching seven passes for 160 yards and a late score.

Mendon quarterback Chris Dupree provided the majority of his team’s offense, rushing 26 times for 152 yards and throwing for 77 more. Evan Lukeman, who rushed for 401 yards against Fennville, was held to just six yards on 12 attempts, and was often hit as soon as he touched the ball.

Haskins was also a force on defense, making 14 tackles and intercepting a pass for the game’s only turnover. Nolan Staniszewski led the Bees with 15 tackles and Clark Smith had 14, including two for loss.

“We were severely outweighed at the line, and we had to really come up with a plan for that,” Locke said. “We used edge speed, and the guys on the edge played well. You have a big 230-pound guy coming at you and they went at them full speed and took them on. They clogged up the middle quite well, and you could see they tried bouncing to the outside, and our corners, Nate and Reid, were there on the edge. It was just hard to move the ball on us.”