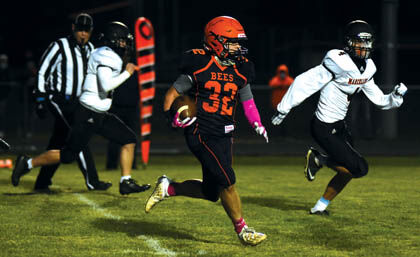 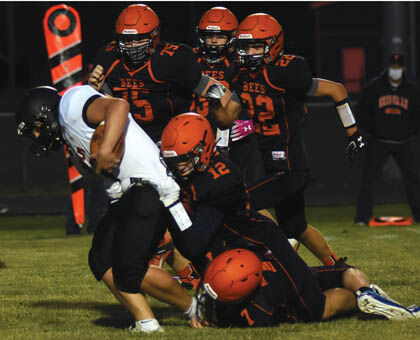 A swarm of Bee defenders pull down Marcellus runner Chadlee Nestell on Sept. 18. 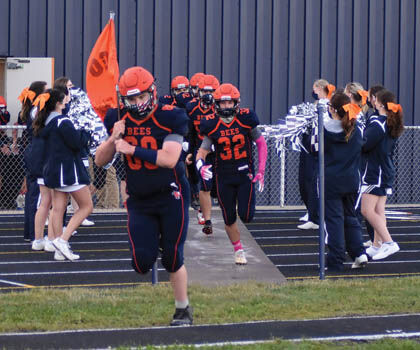 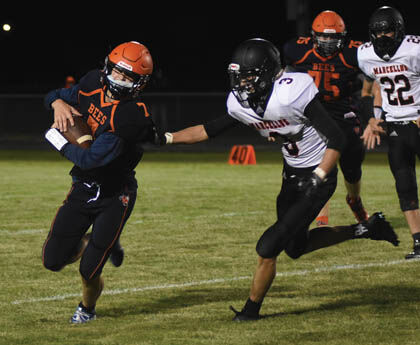 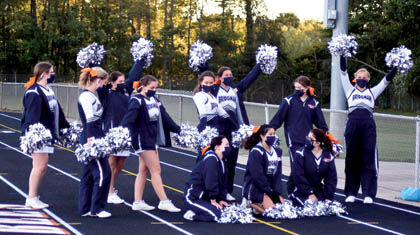 Bridgman High School cheerleaders pose for a photo prior to kick-off on Sept. 18. 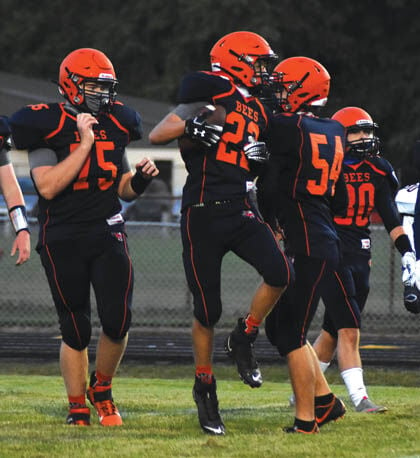 Bridgman's WIll Ott (center) celebrates after catching a touchdown pass in the Sept. 18 season-opener.

A swarm of Bee defenders pull down Marcellus runner Chadlee Nestell on Sept. 18.

Bridgman High School cheerleaders pose for a photo prior to kick-off on Sept. 18.

Bridgman's WIll Ott (center) celebrates after catching a touchdown pass in the Sept. 18 season-opener.

BRIDGMAN — The Bridgman High School eight-man football team scored early and often in its Friday, Sept. 18, opener against visiting Marcellus, opening up a 34-0 half-time advantage en-route to a 48-30 victory.

"We have a lot of great assistant coaches that helped prepare kids all week," he added.

The Bees reached the end zone on the contest's first play as Jayce Warren returned the opening kick-off all the way. Quarterback Reid Haskins ran in the two-point conversion for an 8-0 lead with just 12 seconds having run off the clock.

Running back Nate Necas broke loose for a 44-yard gain on the Bees' second possession, helping to set up a 7-yard scamper to pay-dirt by Haskins (who also ran in the conversion to leave the margin 16-0 early in the opening frame).

The ensuing kick-off glanced off a Wildcat player and was recovered by Necas. Haskins later fired a 27-yard scoring strike to Will Ott on fourth down to make it a 22-0 ballgame with 3:22 remaining in the first quarter.

Marcellus drove deep into Bridgman territory early in the second stanza before fumbling the ball away at the two-yard line (Necas made the recovery for the Bees).

Taking advantage of a short field after a Marcellus punt play went awry, a 37-yard drive ended on Haskins' 7-yard touchdown rush with 3:36 to go in the first half.

Moments later Zachery Teed recovered a Wildcat fumble at the 33 yard line. The Bees again capitalized, with Haskins rambling in from 17 yards out to open up a 34-0 chasm with 2:24 left in the second quarter.

It was the first varsity start at quarterback for Haskins, and the sophomore said preparation was the key to the Bees' success.

"We've been prepared for this, we've been practicing so we were ready for tonight."

Marcellus finally got on the scoreboard with 3:43 to go in the third period as quarterback Gavin Etter hit Ethan Borger with a 15-yard touchdown strike on fourth down.

The Wildcats would go on to tally 24 more second half points, but Necas reached the end zone twice for the Bees (a 10-yard surge with 20 seconds remaining in the third and a 34-yard rush at the 2:48 mark of the fourth quarter) to keep the lead safe and sound.

Necas said the blocking was good all night on offense.

"We stayed with our blocks … that helped a lot," he added.

Necas finished with 209 yards on 13 carries with the two touchdowns. Haskins ran for 52 yards and three TDs while throwing for 42 yards and another score.

Haskins finished with 14 tackles on defense while Christian Dinges had 11.

A visit to Martin is on the schedule for Friday, Sept. 25.

BANGOR — The Bison eight-man team rolled to victory on the road Saturday, Sept. 18.

Quarterback Michael Bombin led the NB ground game (which totaled 170 yards) with 79 yards. He also completed 6 of 9 pass attempts for 37 yards and 1 touchdown.