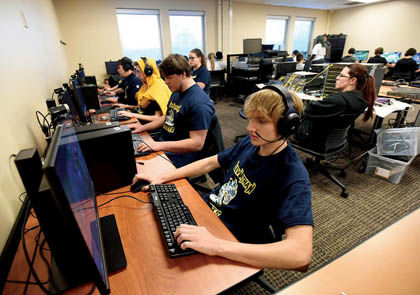 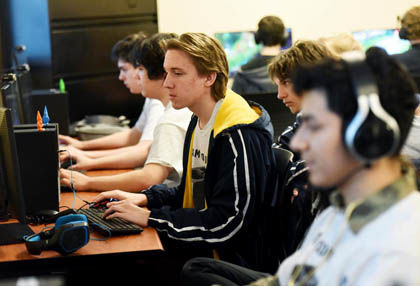 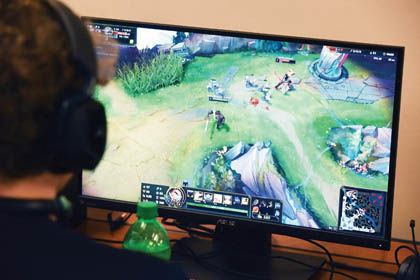 BENTON TOWNSHIP — Lake Michigan College served as the epicenter of Southwest Michigan esports on Dec. 5 as players, coaches and families came from across Berrien, Cass and Van Buren counties for an eight-team esports championship tournament.

While the remaining teams that racked up the most wins from the first esports season played in different rooms in the Ed Todd Center, dozens of others sat and watched on big screens in Grand Upton Hall.

Ian Haight, coach to both Paw Paw teams that made the championship series, said he has been happy with how the season has gone under the supervision of Berrien RESA.

“We had all the growing pains you would expect,” he said. “I think we’re in a really good spot. I’ve heard from other districts that are interested in joining.”

Haight said scheduling proved to be the hardest part of the season. However, he said it was encouraging to see there were no technological problems.

“The whole season exceeded expectations,” Haight said. “When we put this league together, we thought maybe there would be four, five or six teams. But we had 20 sign up and had to make two divisions.”

He said he wouldn’t be surprised if the number of teams doubled next year.

Haight said one of the changes he would like to look into is whether another video game could be introduced to the league. This year, “League of Legends” was the lone game used because it was considered the easiest game to get into.

One of the more common games to be suggested has been “Overwatch.”

However, Haight said that would require a bigger commitment from schools, as the game demands the use of “beefy computers.”

The season began in October with 20 teams that collectively boasted more than 100 students across the region.

Tonya Snyder, student activities coordinator at Berrien RESA, said she wasn’t familiar with esports when she was tasked with running the league. However, she loves it because it reaches another group of students.

Snyder said they anticipate another season in the winter/spring semester.

“After Christmas break we’ll launch into another competitive season,” she said. “It would likely be during the winter months since most would be inside that time of year. The spring can get too busy.”

The esports league that Berrien RESA helped start is mostly comprised of Berrien County school districts, along with a few from Cass and Van Buren.

The league allows any high school student to play for free. Teams are made up of five students with a few alternates. Some districts had more than one team, if they have enough interested students.

The Michigan High School Athletic Association is still considering whether to make esports a varsity sport because of the rising popularity, and growing scholarship availability for the sport.

Thursday’s event featured play-by-play announcers for the final match and a virtual reality station for those who wanted to try some of the VR games.

Sawyer resident Lee Lull was sitting inside the viewing area in support of his son, a senior on the River Valley High School team.

Lull said he was excited about the league because he knew his son enjoys playing the game that was chosen.

“I had heard about it (esports) before,” Lull said while watching his son’s game from the other side of campus. “I have watched some of his previous games. He’s very good.”

Kylie Craig, a freshman from Brandywine High School, heard of the esports league through her Spanish teacher last year.

She was part of the junior varsity team this year and was at LMC on Thursday to support Brandywine’s variety squad that was in the championship tournament.

“I’ve always liked gaming,” Kylie said. “I’ve gotten along with everyone on the team and I found the game to be very fun.”

Kyle Kelly, an LMC professor for computer information systems, said the college chose to get involved after it created a few esports teams of its own.

Each week for the past two months, a new esports team was able to use LMC’s gaming lab to play matches. Kelly said it is a good way to expose students to the Benton Harbor campus.

Nearly every team was present Thursday night, whether it was to play or watch.

Despite the logistical challenges and setup, Kelly said the league went fairly smoothly in its first year.

“Some of the schools really hit the ground running. However, some schools didn’t have a lot of experienced players,” Kelly said. “The skill level was very wide and there were bumps early on with players logging into their accounts. But by week three, I saw real growth in players over the season.”

According to a Wired Magazine article, nearly 200 U.S. colleges offer around $15 million per year in total scholarships for the best esports players, as university teams can earn millions in tournament prizes. While LMC showcased its capability to hold esports events, several universities –

including Western Michigan University – had scouts in the audience Thursday night.

Kelly said the local league will only benefit colleges from around the region.

“I think it’s just going to explode,” he said. “All of this is good for LMC starting esports teams. The interest from high schools is just going to filter up to us. That’s our core recruiting base.”