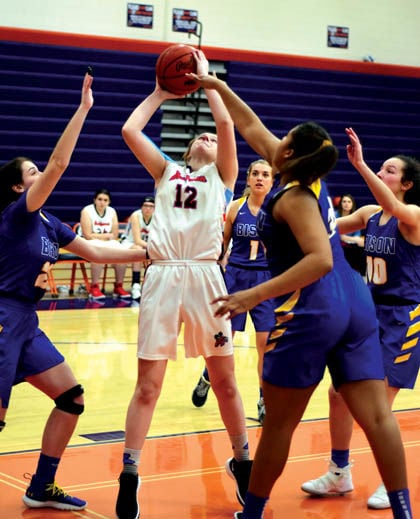 Mackenzie Norris of Bridgman (center) shoots from the middle of the New Buffalo defense during a Feb. 25 contest played in “The Hive.” 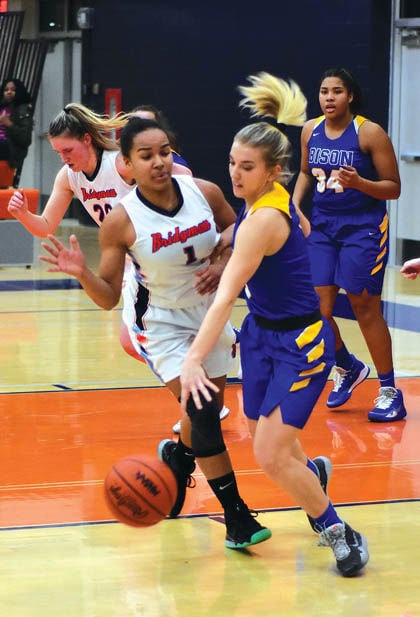 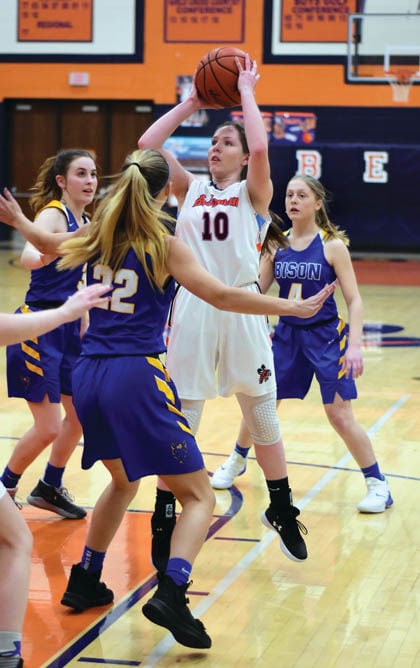 Bridgman's Sam Rydwelski lines up a shot against New Buffalo. 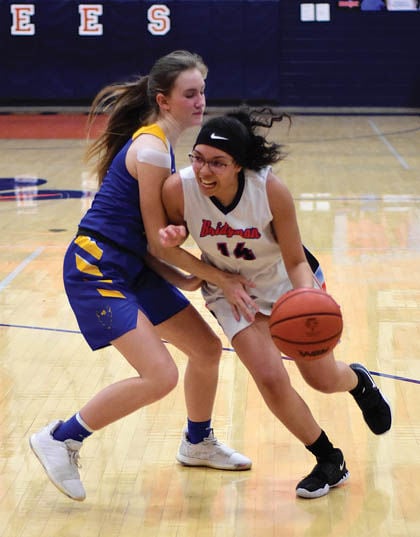 Mackenzie Norris of Bridgman (center) shoots from the middle of the New Buffalo defense during a Feb. 25 contest played in “The Hive.”

Bridgman's Sam Rydwelski lines up a shot against New Buffalo.

“They kept fighting the whole game, said NB senior Mary Mayer. “We didn’t start out as strong in the first half, and then we came back in the second half.”

Kelsey Corkran had half of New Buffalo’s 12 second-period points as the Bison puled within a point (20-19) at the half (Tomlin accounted for 6 of the Bees’ 11 points in the second stanza).

An offensive rebound and put-back by Talea LaVanway upped the Bridgman lead to 22-19 early in the third period, but it was all New Buffalo after that — the Bison out-scored their hosts 15-1 the rest of the quarter to carry a 34-23 advantage into the fourth frame.

Aaron James sank a pair of three-point shots during the run, while Kelsey Corkran and Abby Vitale each added a pair of field goals.

New Buffalo opened the final period by scoring six straight points (on two Sophia DeOliveira baskets and a make from Nadia Collins) to open up a 40-23 margin.

The Bees battled NB nearly even from there, scoring all six of their fourth-quarter points at the foul line.

James ended the game with a shot-plus-foul three-point play. She paced the Bison with 13 points, Kelsey Corkran and Abby Vitale each tallied 10 points, and Nadia Collins added 6 points.

Tomlin finished with 10 points while Talea LaVanway scored 8 for the Bees.

New Buffalo is set to open the Division 4 district (played at River Valley) at 5:30 p.m. March 4 against Lake Michigan Catholic. A match-up between the host Mustangs and Michigan Lutheran follows.