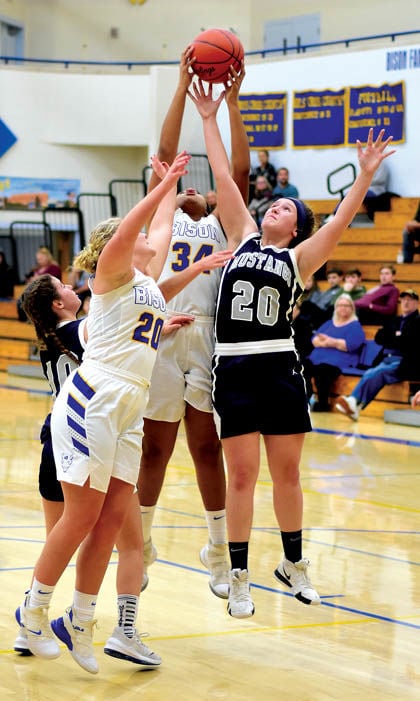 Lucia Rico, Clair Workman, Nadia Collins and Emma Springer (from left) rise up for a rebound during the Dec. 6 game. - photos by David Johnson 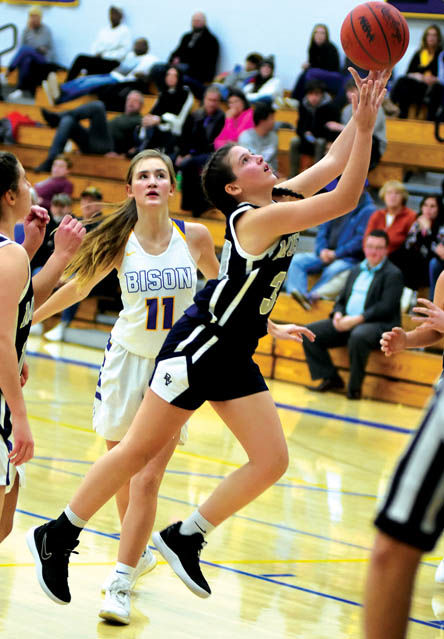 River Valley’s Joanna Vert leans into a shot while Kelsey Corkran of New Buffalo looks on. 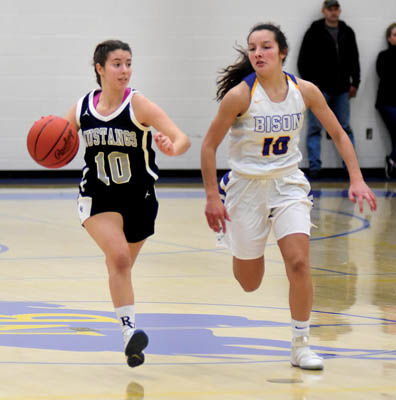 Lucia Rico and Sophia DeOliveira on the run. 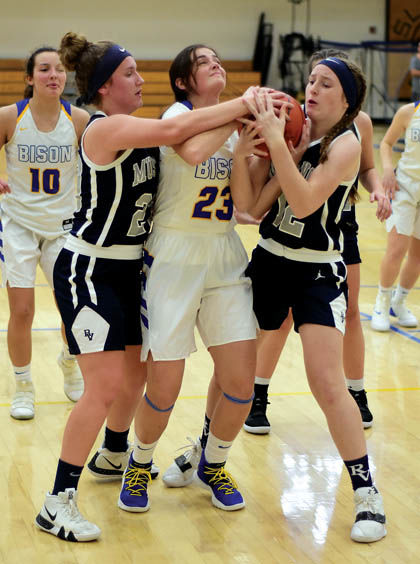 Emma Springer, Georgia Arvanitis and Macey Springer (from left) vie for control of the ball. 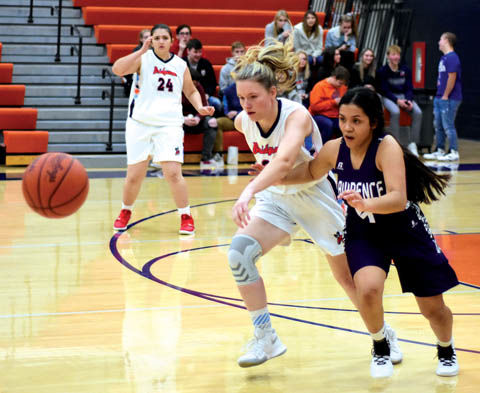 Bridgman’s Elise Schmaltz goes for a steal against Lawrence.

Lucia Rico, Clair Workman, Nadia Collins and Emma Springer (from left) rise up for a rebound during the Dec. 6 game. - photos by David Johnson

River Valley’s Joanna Vert leans into a shot while Kelsey Corkran of New Buffalo looks on.

Lucia Rico and Sophia DeOliveira on the run.

Emma Springer, Georgia Arvanitis and Macey Springer (from left) vie for control of the ball.

Bridgman’s Elise Schmaltz goes for a steal against Lawrence.

NEW BUFFALO — The New Buffalo-River Valley rivalry was alive and well on Dec. 6 in the second game of the 2019-20 girls basketball season.

The host Bison pulled out a 41-39 victory after sophomore guard Aaron James broke loose for an open fast-break score with 17.2 seconds left in the fourth quarter.

“I just wanted to make sure to get it in,” she said. “It was pretty nerve-wracking but I got it.”

Junior Nadia Collins fired the pass to James that led to the clutch hoop after sss a rebound.

The visiting Mustangs had taken a 39-37 lead with a little over a minute remaining thanks to a pair of baskets by Taylor Volstorf.

New Buffalo tied the score at 39-all on Sophia DeOliveira’s offensive rebound and put-back at the 36-second mark.

It was the first win as New Buffalo’s head coach for Scott Syme following a 10-point setback (49-39) against Michigan Lutheran on Dec. 3.

“We definitely have a lot of things to work on but they’re getting better every day,” he said.

The home team jumped out to an early 10-4 advantage as Mary Mayer, Kelsey Corkran and DeOliveira scored.

River Valley responded, as they would all evening, by climbing back into contention. The first comeback, which yielded a 10-10 tie, was powered by six unanswered points from Emma Springer.

The Bison finished the first quarter on a 7-2 run as Abby Vitale scored twice and a Nadia Collins basket upped the lead to 17-10 in the late-going.

New Buffalo maintained its edge in the second stanza with buckets by Vitale and Corkran helping forge a 23-18 half-time margin.

The Mustangs surged into a 27-25 lead in the third period as Emma Springer, Joanna Vert, Volstorf (a three-point shot) and Lucia Rico (a steal and lay-up) led the charge.

New Buffalo answered with four straight points on hoops from James and Mayer to lead 29-27 heading into the final frame.

River Valley quickly seized a 31-29 lead on scores by Emma Springer and Annekah Witter, but the Bison jumped back on top 34-31 as Clair Workman hit a shot and Mayer and James contributed free throws.

A basket by Emma Springer and a pair of Vert foul shots with 3:17 left edged the Mustangs back on top 35-34.

Volstorf’s aforementioned two scores were split by a James bucket to leave the score 39-37 with 1:14 showing on the clock.

“We kept fighting for it, and we came out on top which was huge,” Mayer said.

Vitale said the Bison had their ups and downs, but in the end it came down to who wanted it more.

“We wanted to win,” she added.

Mayer and Vitale paced New Buffalo (1-1) with 9 points each. DeOliveira finished with 8 points while James and Workman each tallied 6 points.

Volstorf led all scorers with 14 points. Emma Springer scored 10 and Vert added 9 points for the Mustangs.

River Valley coach Jason Alexander said the Mustangs turned the ball over too many times and missed too many free throws (a problem shared by both squads).

Nyhilia Durham paced the Bison with 7 points while Meredith Dinges tallied 7 for RV.

The River Valley boys opened their 2019-20 campaign at Decatur on Dec. 9 by winning 45-28. Lennon Lange tallied 20 points while Matthew Schmidt had 7 and Jacob Barbour scored 6.