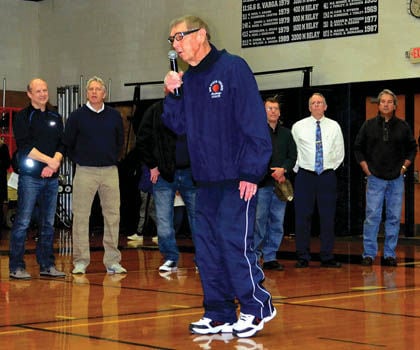 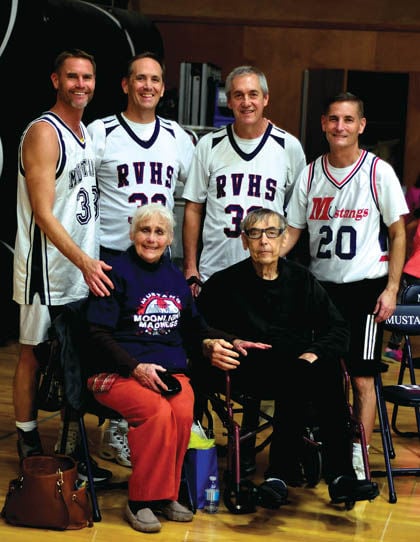 Doug, David, Gary and Gregg Schaffer (standing from left) with their parents, Peg and Jerry Schaffer during the Nov. 22, 2019, Mustang Moonlight Madness night which featured scrimmages between the 2019 River Valley High School varsity basketball teams and RV alumni squads (played in the gym named in honor of Hall of Fame Coach Jerry Schaffer). 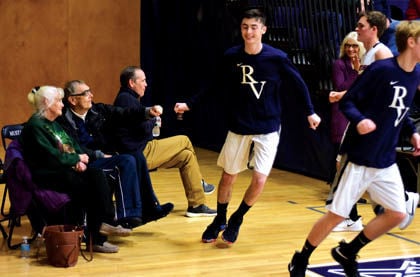 It was a pre-game tradition for River Valley players to check in with Coach Jerry Schaffer before playing in the gym bearing his name (this scene is from December 2019). 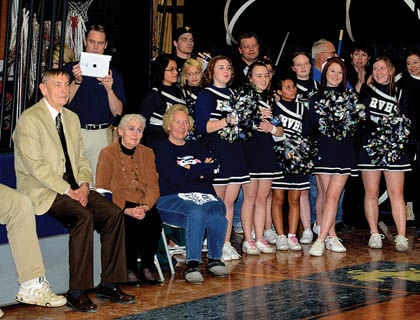 Jerry and Peg Schaffer (from left) await the beginning of the 2014 ceremony renaming the River Valley gym in honor of the longtime Mustang basketball coach. 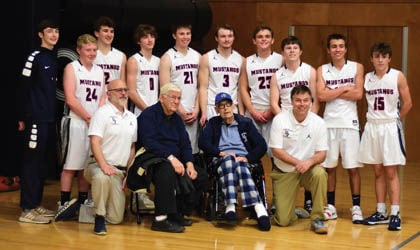 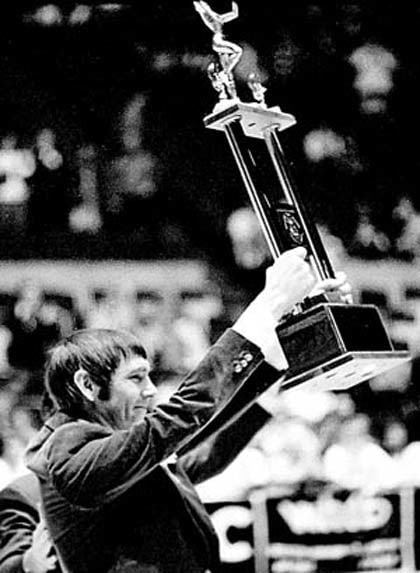 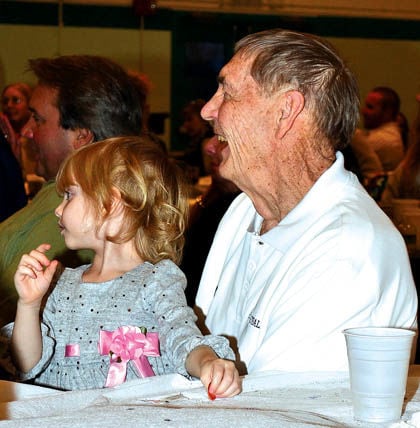 Jerry Schaffer enjoys a reunion held in 2013 the evening before the movie "Mustang Magic: When Every Friday Night Mattered" made its debut. 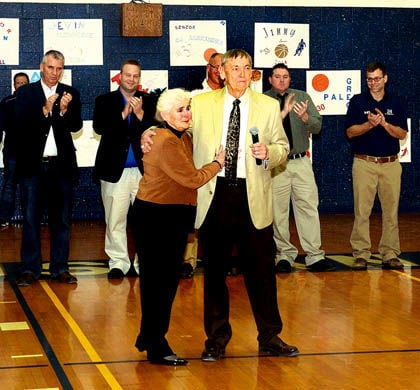 Peg and Jerry Schaffer were the center of attention during a 2014 ceremony during which the River Valley Middle/High School gym was officially renamed Jerry Schaffer Gymnasium in honor of the Hall of Fame basketball coach. 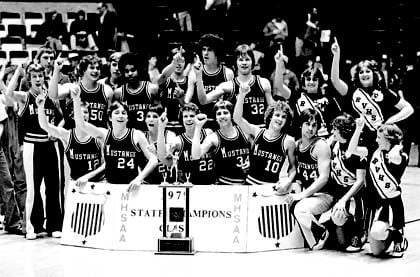 Doug, David, Gary and Gregg Schaffer (standing from left) with their parents, Peg and Jerry Schaffer during the Nov. 22, 2019, Mustang Moonlight Madness night which featured scrimmages between the 2019 River Valley High School varsity basketball teams and RV alumni squads (played in the gym named in honor of Hall of Fame Coach Jerry Schaffer).

It was a pre-game tradition for River Valley players to check in with Coach Jerry Schaffer before playing in the gym bearing his name (this scene is from December 2019).

Jerry and Peg Schaffer (from left) await the beginning of the 2014 ceremony renaming the River Valley gym in honor of the longtime Mustang basketball coach.

Jerry Schaffer enjoys a reunion held in 2013 the evening before the movie "Mustang Magic: When Every Friday Night Mattered" made its debut.

Peg and Jerry Schaffer were the center of attention during a 2014 ceremony during which the River Valley Middle/High School gym was officially renamed Jerry Schaffer Gymnasium in honor of the Hall of Fame basketball coach.

Schaffer died Wednesday morning, April 8, after a long bout with cancer. He was 81.

Schaffer won more than 500 games as a high school basketball coach, most of them at River Valley, and guided the Mustangs to the 1979 Class C state championship. He is a member of both the Michigan High School Basketball Coaches Associa­tion Hall of Fame and the Hillsdale College Athletic Hall of Fame. He earned 12 varsity letters at Hillsdale as a four-year player in football, bas­ketball and baseball.

“The public may be aware of his amazing coaching career,” said his son Gregg Schaffer, the current varsi­ty boys basketball coach at St. Joseph. “What family, friends, former play­ers, colleagues and students know is what a blessing it was to know Jerry Schaffer personally. He positively led by example in every area of his life.”

River Valley named its basketball facility Jerry Schaffer Gymnasium in 2014, and for good reason. Schaffer became the school’s first-ever basketball coach in 1966-67, and coached until 1999, compiling a record of 473-272. Including brief stints at Woodland, Mich., and New Troy before it became part of River Valley, Schaffer totaled more than 500 career victories.

His Mustang teams won 13 district titles, 10 conference crowns and seven regionals. They reached the state semifinals four times, twice finishing as runner- up and winning it all in 1979.

“I had a lot of good memories in here for those 38 years,” Schaffer said at a 2019 event honoring the 40th anniversary of the title team. “It was highlighted by some special years, and 1979 had to be right at the top because we were state champs.”

The 1979 team was particularly memorable as its tallest player was just 6-foot-1. The Mustangs were only an honorable mention selection in Class C entering the tournament, but relied on defense, holding teams under 50 points and winning close games.

At that time, one of River Valley’s biggest rivals was Lakeshore. Then-Lancers coach Jim Sanford recalled some intense battles with Schaffer’s teams.

“If you weren’t sitting in the gym by 6 o’clock, you weren’t going to get in,” Sanford remembered. “I probably spent more preparation time on River Valley than anyone we played. His teams were so well-coached fundamentally. You knew they were going to stay in the game because they were so fundamentally sound. They ran their offenses to a T. They were very patient looking for the best shot they could get, and they weren’t going to turn it over. You had to be really prepared physically and mentally to play his team.”

Sanford said that most of the games between the two teams were in the 40s because of the emphasis on defense. He also looked up to Schaffer off the court.

“We were really good friends,” Sanford said. “He was a good mentor for me and he didn’t even know it.”

Schaffer also had an impact on another rival coach, Mike Miller of Bridgman. Miller, who took over at Bridgman in 1992, recalled many close rivalry games – particularly a 1997 contest where a potential game-winner at the buzzer for the Bees was waved off.

“He had his boys believe that the team came first and individual stats came second,” Miller said. “I always admired that about his teams.”

What impressed Miller even more, though, was Schaffer volunteering to visit his offseason camps and speak to young players, which he said helped him get off on the right foot as a coach.

During an April 13 Zoom meeting of the New Buffalo Area Schools Board of Education, Superintendent Dr. Jeff Leslie sent his condolences to Schaffer's family and the River Valley Community.

"I got to coach against Jerry my first two years when I was at Berrien Springs. What a gentleman! He was just so gracious to me."

“Gregg is one of the most honest, ethical and fair coaches I’ve ever worked against,” Miller said. “I think that represents everything his father wanted him to be.”

The gymnasium at River Valley High School was renamed in Jerry Schaffer's honor during a ceremony held in January of 2014.

“It would be impossible for me to go over all of the exciting times that we had in this gym,” Schaffer said during the ceremony. “There were so many games and the memories are something that will live with me forever just as this night will live with me forever, and I deeply appreciate the tremendous outpouring, the crowd that’s here tonight — you’ve certainly made me feel awful good.”

Mark Behnke, a 1993 River Valley graduate who spearheaded the effort to make the “Mustang Magic: When Every Friday Night Mattered” documentary, was given credit by Kearney for initiating a petition drive to rename the gym. The school board then voted to make it official.

Schaffer gave thanks to the district’s administrators and school board members for the honor — “Not just the current ones, but the administrators and the boards that supported me while I was the basketball coach here for 33 years. Without that support from your bosses, it’s pretty difficult to maintain a job for that many years.”

He made his River Valley coaching debut in the 1966-67 season — the first year of the high school’s existence. Prior to that he had coached New Troy’s basketball squad for three seasons.

An emotional Schaffer also invited “somebody very special” (his wife, Peg) to join him on the gym floor.

“She was affectionately called by many of the players … for those 33 years ‘Ma Schaffs’, and she’s still Ma Schaffs to this day when these players see her around town,” he said.

Also joining Jerry on the gym floor were his four sons “who mean so much to me, and meant so much to River Valley basketball” — Gary, Gregg, David and Doug.

He noted that all of his sons have coached at one level or another, and have “carried on the tradition of coaching. I’m very proud of all of them for that.”

Schaffer also recognized other family members including grandchildren, daughters-in-laws, siblings and others attending the ceremony.

Schaffer noted that he was the youngest of five children, and his brothers and sister got him interested in basketball, teaching him the right way to play…

“They did a good job!” a member of the crowd shouted out.

Schaffer then gave credit to “the people who have really made all of this possible — All of the players who played for me in those 33 years. I also include in that all of the cheerleaders, all of the staff people (students and adults) … they all contributed a great deal to the success of River Valley basketball, and I appreciate them very, very much.”

Noting that “players make the team,” Schaffer asked all former Mustang cagers in the crowd to stand up. He made the same request for cheerleaders and members of the staff.

Schaffer did recount one very special memory involving the gym, which took place the day after the Mustangs won state in 1979.

“We came back Sunday afternoon and we were greeted at the Bridgman exit by a caravan that none of us could believe. It wound around for miles as we visited the communities of the River Valley system, from Glendora, to New Troy to Harbert to Sawyer to Three Oaks to Union Pier. All of those communities welcomed us back unbelievably. Not only was that exciting, but then we got to come into the gymnasium … the players had to walk through all of the young kids that were on the floor. The stands were packed. You can’t imagine how good that reception made us all feel … we felt the love from the entire community.”

Schaffer closed his talk by asking all of the parents who have children in the River Valley system to stand and be recognized.

“Parents, I would just like to say, stay loyal to your school,” he stated. “Support your sons and daughters whether they’re playing volleyball on this court, basketball, wrestling, whatever the sport may be. Stand behind them 100 percent and RV will always remain and will always be a big part of my life.”