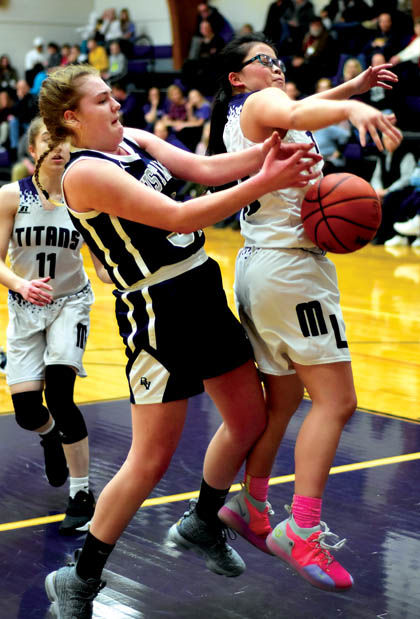 Hailey Hauch of River Valley (left) tries to get the basketball away from Michigan Lutheran’s Jessi Jewell. 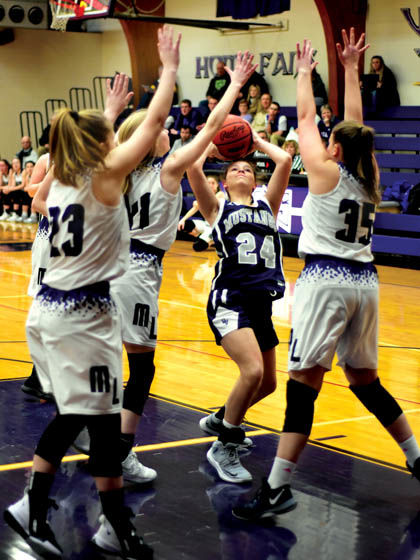 Alexis McCarty (center) of River Valley looks to shoot through the Titan defense.

Macey Springer (left) looks to score for the Mustangs.

Hailey Hauch of River Valley (left) tries to get the basketball away from Michigan Lutheran’s Jessi Jewell.

Alexis McCarty (center) of River Valley looks to shoot through the Titan defense.

Macey Springer (left) looks to score for the Mustangs.

ST. JOSEPH – The River Valley girls basketball team gave Michigan Lutheran all it could handle in the early goings of a Feb. 20 Berrien-Cass-St. Joseph White Division tilt. The Titans shook off a slow start to defeat River Valley 36-20, clinching at least a share of their fifth straight BCS White title.

“We knew it was for a championship fight,” Michigan Lutheran coach Ron Briney said. “I was very pleased with our defense. We were inconsistent on offense but we busted loose a few times with our defensive and offensive capabilities. That was enough for us to get a win against a quality team tonight.”

Michigan Lutheran’s 36 points were its lowest point total in a win this season and its second lowest overall, the lowest being 34 points in a 54-34 loss to New Buffalo on Feb. 7.

The Mustangs (9-4 BCS White, 11-7) were able to disrupt the Titans’ flow of offense in the first quarter, holding them to a Jessi Jewell 3-pointer while taking a 5-3 lead into the second quarter.

The Titans’ press defense forced turnovers that led to easy baskets on offense. When shots weren’t falling, the Titans crashed the boards for offensive rebounds that led to second-chance points. The Mustangs had open looks around the basket that they weren’t able to convert.

“We didn’t shoot the ball particularly well tonight,” River Valley coach Jason Alexander said. “I thought our defense was really good at times. We gave up some backside layups that we can’t do, but if we shore things up and make some baskets, we’re right in the ball game.

“We’re a much better shooting team than we showed tonight.”

Michigan Lutheran led 13-7 at halftime and 23-10 after three quarters. The Titans led by as many as 20 when Jewell found a cutting Mara Rugen from the top of the key for a layup that made it 30-10 Titans midway through the fourth.

Winning five straight BCS White championships is no easy feat. Briney is proud of the way his team dedicates itself to details.

“This group of kids are great and they love to work hard. They truly enjoy each other’s company. They’ve been a tremendous joy to coach. They’ve bought into the effort that it takes to be a champion.”

The loss is River Valley’s second straight after falling to BCS Red leader Brandywine 60-17 on Monday. Alexander hopes those two games can pay dividends when they host the Titans on March 4 in Division 4 district semifinal play.

“Losses stink, but we take them as learning lessons,” Alexander said. “We have to go back to the film and commit ourselves to do the little things that get us over the hump. Playing teams of this caliber is going to push you to be better.”