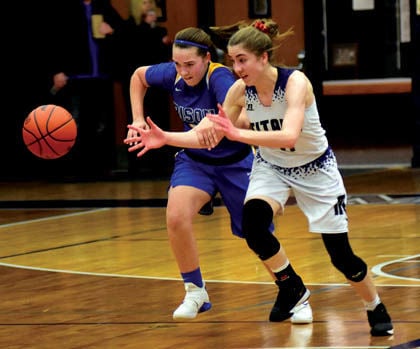 Aaron James of New Buffalo and Michigan Lutheran's Mara Rugen (from left) chase down the basketball. - photos by David Johnson 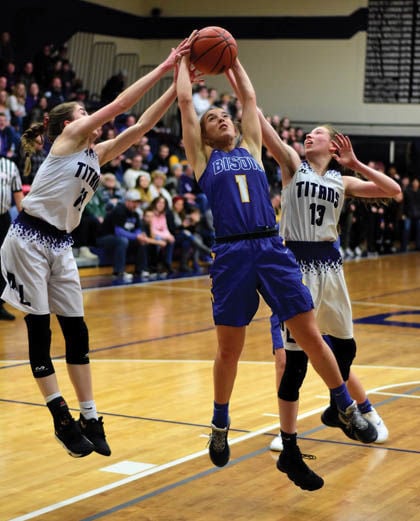 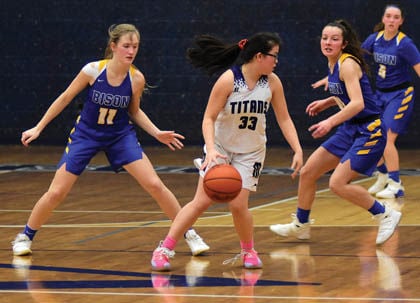 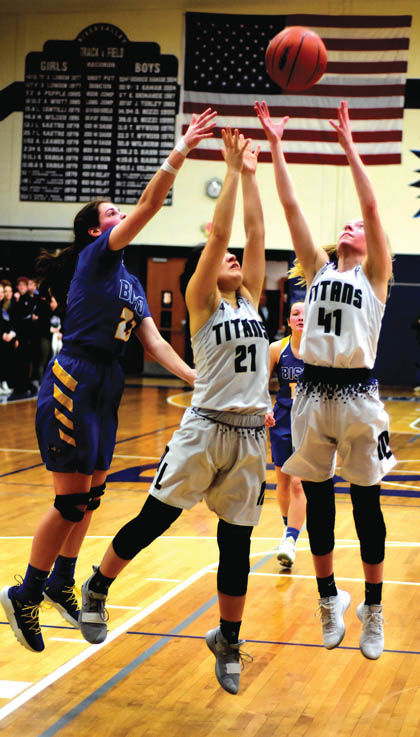 Georgia Arvanitis of New Buffalo (from left) and Michigan Lutheran players Lexi Tobias and Hailey Conrad compete for a rebound.

Aaron James of New Buffalo and Michigan Lutheran's Mara Rugen (from left) chase down the basketball. - photos by David Johnson

Georgia Arvanitis of New Buffalo (from left) and Michigan Lutheran players Lexi Tobias and Hailey Conrad compete for a rebound.

THREE OAKS — Fans attending the Friday, March 6,  Division 4 district championship game between Michigan Lutheran and New Buffalo were expecting a battle. The two teams split their two regular-season match-ups, with the Bison winning the last game by 20 points on Feb. 7.

But the Titans were on a mission.

Michigan Lutheran scored the game’s first 23 points and rolled to a 54-27 victory to claim the program’s fourth straight district championship.

“We worked hard on the details,” Michigan Lutheran coach Ron Briney said. “We learned a lot from the last time we played. We respect their program; they’re very well-coached. We came out and everything was rolling on both offense and defense. When we play as a complete club like that, we’re pretty good.”

New Buffalo struggled with Lutheran’s press defense and had no answer for senior Mara Rugen, who scored 23 of her 30 points in the first half. She also added five steals, four assists, and four rebounds.

Rugen’s speed and timing allowed her to create steals that led to easy baskets at the rim. She was also effective at the mid-range and from 3-point range.

“I was really focused on the defense,” Rugen said. “I wanted to stay low and anticipate the passes. I wanted to move on the pass and not the press.”

“Mara is a two-way player,” Briney said. “She plays great defense and great offense. Tonight her shot was falling on offense and her defense was as sharp as ever. She’s the focal point of our defense. She did a great job of leading and everyone jumped in and held them down.”

New Buffalo’s best quarter on offense was the third, where they scored 10 points. The Titans led by as many as 32 when Rugen laid in the Titans’ final basket to put them up 54-22 late in the game.

“We got in a hole to start the game, which was unbelievable,” New Buffalo coach Scott Syme said. “We made a lot of mistakes that we had worked all week on not trying to do, so that was a little frustrating. All year long, the girls have never pointed fingers during adversity. They wanted this game so bad, so it’s hard to be in a situation like this where you see everything fall apart. But their mental strength is something that’s going to carry them far in life.”

Rebekah Hisle had 13 points and six rebounds for Michigan Lutheran (21-1). Mary Mayer and Aaron James scored six points apiece for the Bison, who finish their season with a 17-5 record.

“I took over the program in July,” Syme said. “I didn’t have a summer to work with the kids. From the first day of practice to now was a blast. This is a great group of girls. For them to learn a new system and get to know me as a coach and have a successful season says a lot about what they’re made of.”

According to Briney, the Titans’ work ethic made this district title possible.

“We have a great group of seniors that led in a very positive environment,” Briney said. “Our defense has been a trademark, but these kids have taken it to another level. When the offense catches up to the defense, we look pretty good. Tonight was one of those nights.

“This is a very memorable group of kids. Their effort is second to none.”

The Titans were slated to face Fruitport Calvary Christian (18-3) on Tuesday, March 10, in the D4 regional semifinal hosted by Martin. The two teams played each other in last season’s regional semifinal, with the Eagles winning 45-22.

“They got us pretty good last year,” Briney said. “I think we learned a lesson from that. These seniors will be hungry to turn the tables. I think it’s gonna be a pretty good game and hopefully, we’re gonna give ourselves a chance like we did tonight.”