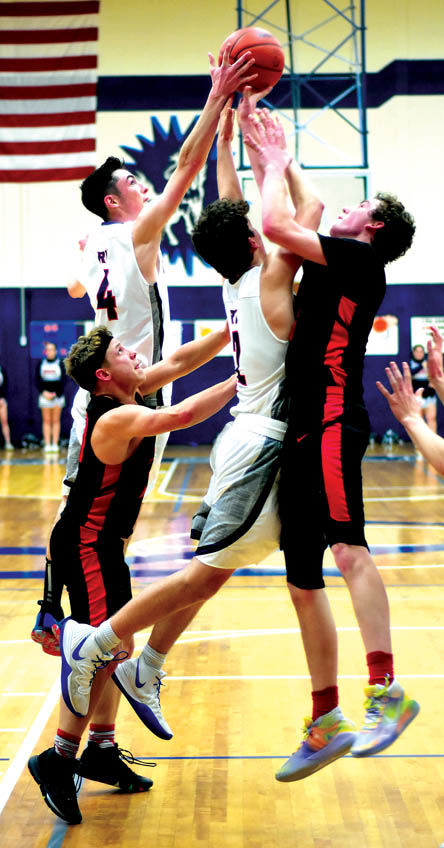 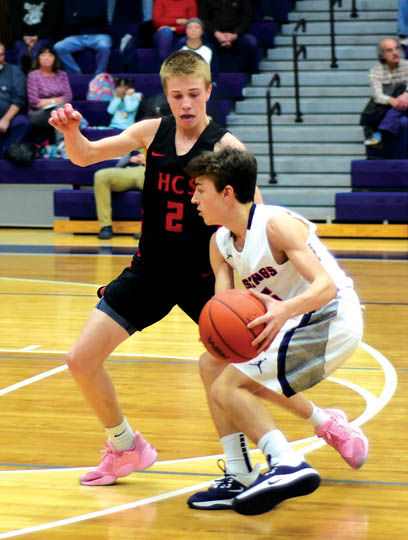 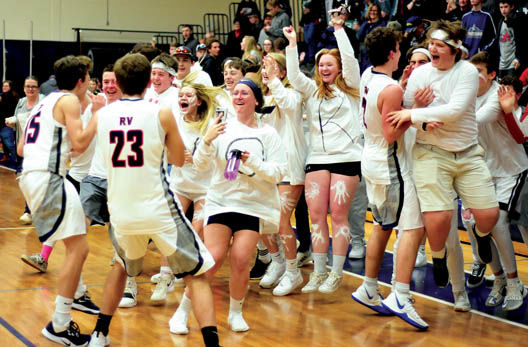 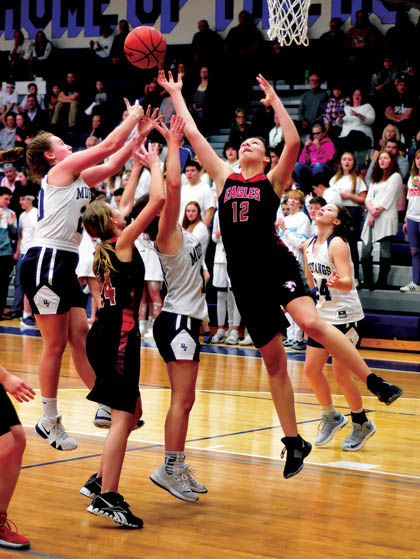 River Valley and Howardsville Christian players go after a rebound during the girls varsity game on Dec. 13. 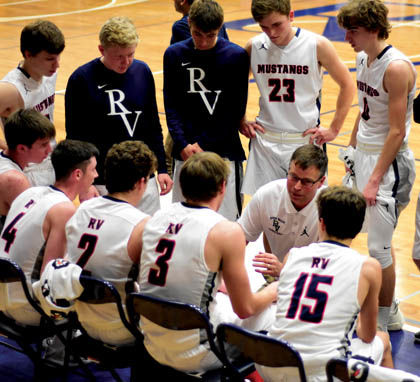 The River Valley bench during a time-out.

River Valley and Howardsville Christian players go after a rebound during the girls varsity game on Dec. 13.

The River Valley bench during a time-out.

"I think we were jittery to start, maybe a little too amped up, made some early mistakes," said Mustang head coach Jason Heckathorn. "Once we settled down I think we did a better job using our strength and size."

"They came out … and punched us in the mouth, we weren't really expecting it," RV senior WIl Korbel said. "But we persevered and overcame."

The visiting Eagles held a narrow 8-6 advantage after one quarter of play as Josh Rose tallied four early points for Howardsville while Davyd Bronson did the same for the home squad.

The Eagles opened the second stanza on a 9-2 run to build a 17-8 lead. Josiah Rose scored twice while Jason Jergens drove to the hoop and Josh Parks sank a three-pointer.

The Mustangs began battling back as Korbel, and Lennon Lange scored consecutive baskets to make it a 17-12 ball-game. Korbel then completed a three-point play and Lange swished along-range "3" to push RV on top 18-17 with 1:01 left in the first half.

Lange said Korbel drove toward the basket before kicking the ball back out to him for an open look from behind the three-point line.

Korbel added two more points with :09 showing on the clock by converting a Matthew Schmidt in-bounds pass into a layup.

River Valley's 20-17 lead grew to 26-19 early in the third quarter as Schmidt scored in the paint three times (Korbel and Lange had assists).

Howardsville Christian attempted to battle back as the third frame went on, with Parks and Rose hitting three-point shots and Jergens dropping in a runner to twice close the gap to four points, but the Mustangs were able to answer. Scores by Bronson (two buckets), Schmidt (a three-pointer) and Lange (a three-point play) sent Valley into the fourth quarter holding a 36-28 lead.

Jacob Barbour opened the final stanza by sinking a "3" that left the Eagles looking up at their largest deficit of the night (39-28).

Jergens came through with a pair of three-point baskets over the final 8 minutes, while Parks was on the mark from the bonus zone as well. The first two long-range rainmakers cut the River Valley lead down to five points (41-36) at the 4:42 mark, but an offensive rebound and put-back by Schmidt followed by Lange's 2-for-2 trip to the free-throw line upped the margin to 45-36 with 2:34 to go.

"We had a size advantage so we wanted to be able to exploit that," Schmidt said.

Jergens' second "3" of the fourth went in with 1:25 remaining to leave the score 45-39, but the Mustang sank six foul shots down the stretch to seal the deal.

Heckathorn said he tried to keep a fresh defender on Jergens throughout the contest.

"He's the catalyst for their team … he's a tough player."

"He runs you the entire game. You get over two screens then he turns around and you get hit with two more."

Jergens, the junior brother of All-State and Division 4 Player of the Year Dylan Jergens (a 2019 Howardsville graduate), finished with a game-high 17 points. Parks had 11 points for the four-time defending BCS White champs.

The Lady Mustangs picked up their first victory of the young season after several close losses, besting Howardsville Christian 47-21 on Dec. 13.

"It's nice to get a win and get that one behind us … hopefully we can begin building momentum and keep moving forward," said coach Jason Alexander.

The New Buffalo boys basketball team won its varsity opener on Dec. 13 at Countryside academy by a 73-57 score.

Kaden Parmley poured in 31 points for the Bison while Tucker Morse addd 20.