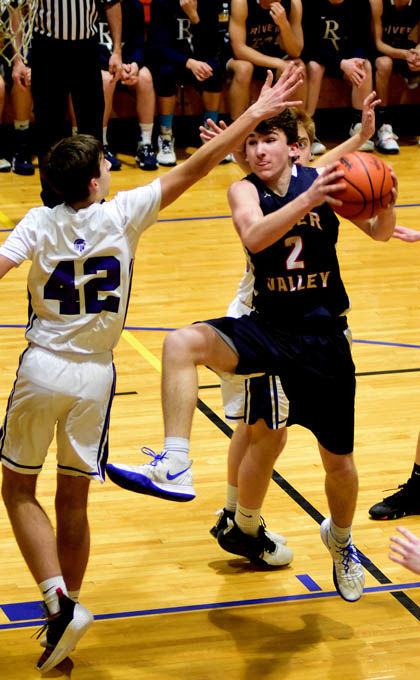 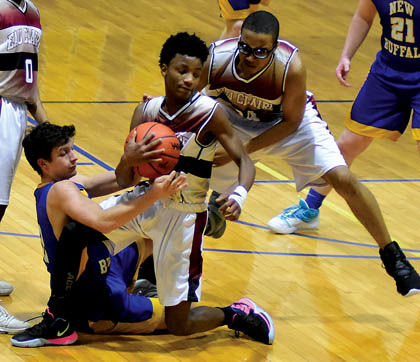 New Buffalo's Stephen Margaritis and Damarion Travis of Eau Claire (from left) wrangle over possession while Twan Spencer looks on. 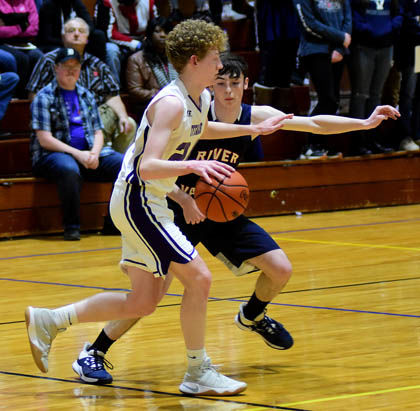 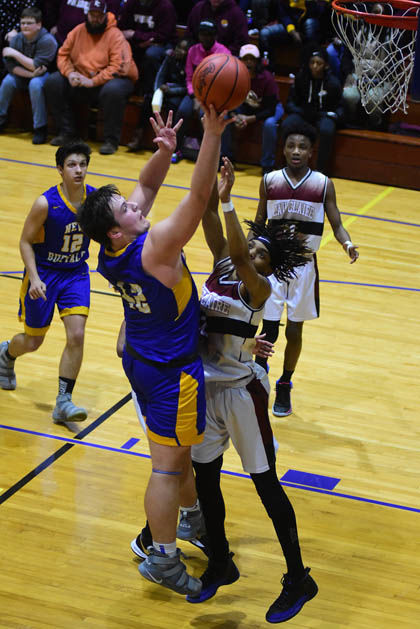 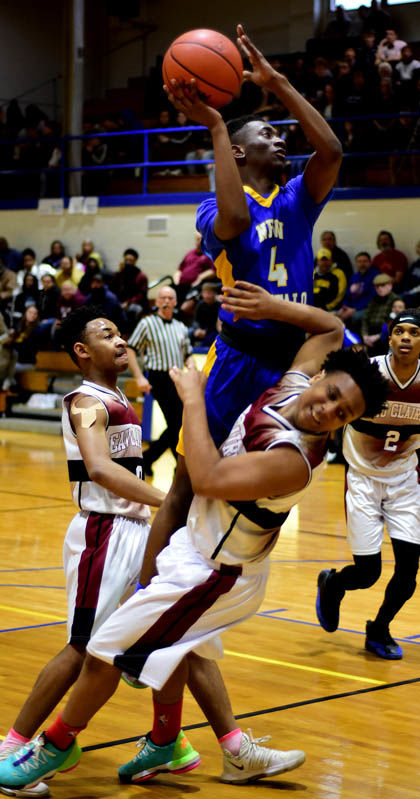 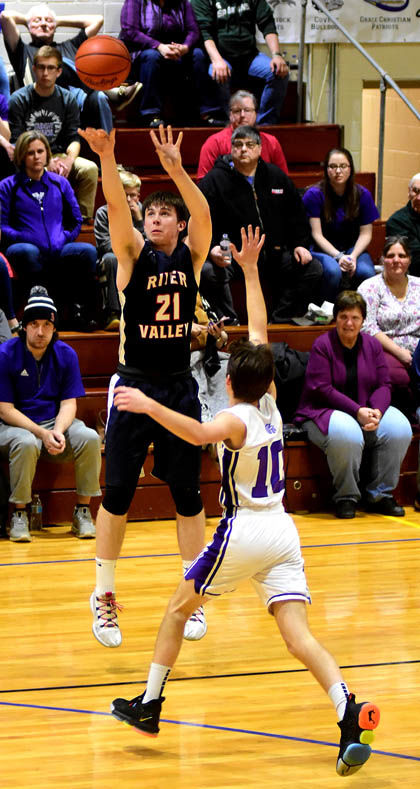 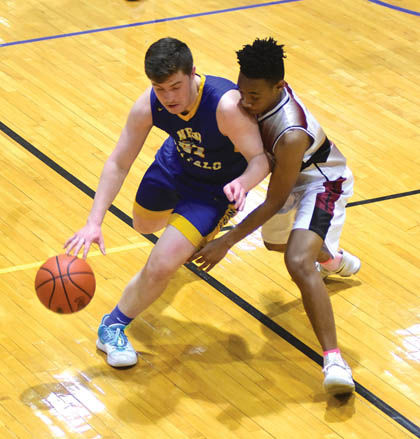 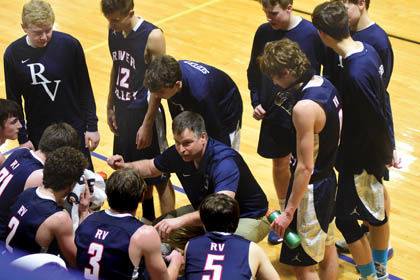 River Valley head coach Jason Heckathorn talkes to Mustang players during a break in the action on Wednesday, March 11. RV's district semifinal victory over Michigan Lutheran could be the squad's last game of the season.

New Buffalo's Stephen Margaritis and Damarion Travis of Eau Claire (from left) wrangle over possession while Twan Spencer looks on.

River Valley head coach Jason Heckathorn talkes to Mustang players during a break in the action on Wednesday, March 11. RV's district semifinal victory over Michigan Lutheran could be the squad's last game of the season.

A day later the cascading avalanche of coronavirus-related cancellations likely ended the season for every boys and girls high school squad still standing in the state. Boys district and girls regional championship games were cancelled with no information provided on new dates.

River Valley head coach Jason Heckathorn said the announcement that there would not be a district title game on Friday, March 13, came as a shock to his players.

"Kind of a feeling of disbelief that it was potentially over," he said. "We're disappointed to not have an opportunity to continue playing. We felt like we were playing well and hitting our stride."

The March 11 opening semifinal contest between the defending district champion Bison and the Beavers was a fast-paced battle from beginning to end.

Foul trouble would plague the Bison all night, with Shaw quickly back to the bench after picking up two.

Eau Claire forged a 14-14 tie midway through the second frame as Terrance Murphy and Daquawn Evans both scored through fouls. New Buffalo answered with consecutive inside scores by Ryan Vinson to go up 18-14. He went on to net two more fields goals, and the Bison needed them all plus a late basket by Parmley to carry a 27-26 advantage into the locker room at half-time.

The Beavers opened the third quarter on a 12-4 run to build a 38-31 lead as Damarion Travis sank three shots and later went 2-for-2 at the line while Deshun Holmes added a pair of field goals. By quarter's end Eau Claire was on top 48-39 thanks to seven points from Marquis Hackney and scores by Murphy and  Jamarion Brown.

The Beaver lead reached 12 points (54-42) early in the fourth period as Hackney and Travis scored. (Hackney's dunk later in the game served as an exclamation point for Eau Claire).

Fouls were taking their toll on the Bison with Shaw, Stephen Margaritis and Vinson all picking up their fifth by the time the fourth quarter was rolling.

The lead was still a dozen (64-52) points with less than two minutes remaining before a series of missed Eau Claire free throws and a 13-point barrage from Lijewski (including a late three-pointer) pulled New Buffalo within three points of the lead.

Lijewski’ finished with 19 points. Vinson tallied 18 and Parmley (who fouled out in the late-going) had 16 points. Nate Tripp pulled down 15 rebounds for the Bison (12-9).

Michigan Lutheran fell behind the Mustangs 15-3 after one period of play as Jacob Barbour opened the game with consecutive three-pointers and Lennon Lange scored six straight points for RV.

Michigan Lutheran managed to hang around through the half-way point (trailing 23-14) on the strength of three-point buckets from Nick Lockman, Alex Ritter and Andy Semenak.

But the Mustangs dominated the third period to put the game away.

Lange got things rolling with a "3" and Matthew Schmidt ended up knocking down a trio of three-pointers and tallying 11 points as River Valley opened up a 20-point chasm (39-19).

Valley went on to out-score the Titans 13-6 over the last eight minutes.

Schmidt finished with 18 points including four treys, Lange scored 12 and Barbour had 11 points, including three treys.

With the remainder of the postseason in limbo at best, the Mustangs have already secured sole possession of the BCS White Division Championship.

'I'm thankful that we did achieve that goal," Heckathorn noted.

If this is the end of the season, Heckathorn said there is only one other boys basketball team in River Valley history that ended with a victory — the 1979 state champions.