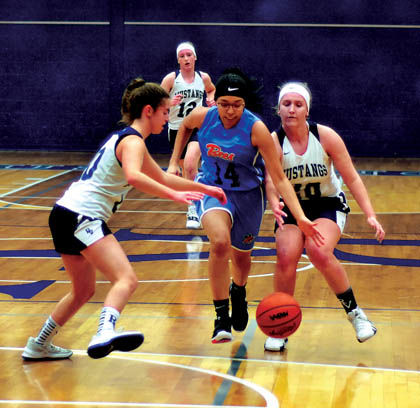 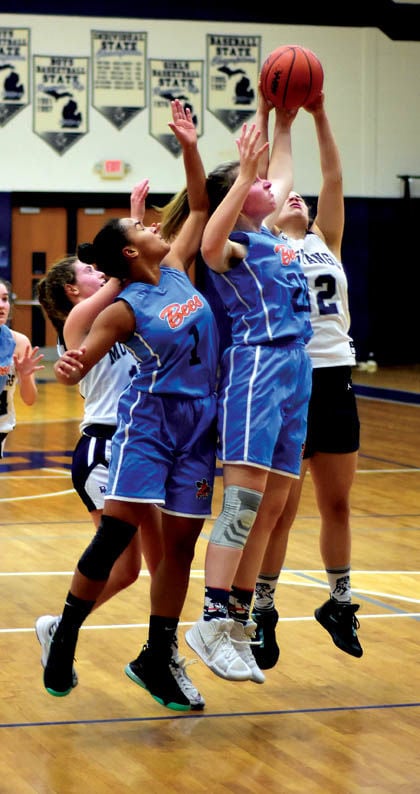 River Valley and Bridgman players soar above the court while battling for a rebound during the Dec. 27 holiday break girls basketbal game. 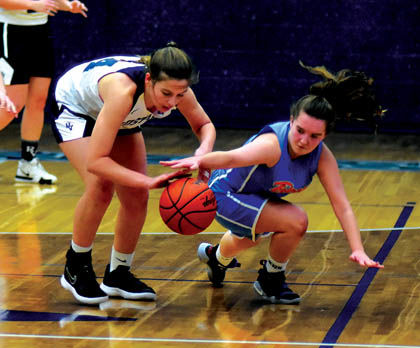 Alexis McCarty of River Valley (left) and Bridgman’s Bri Russell dive for a loose ball during the Dec. 27 game.

Emma Springer (left) and Elise Schmaltz vie for a rebound. 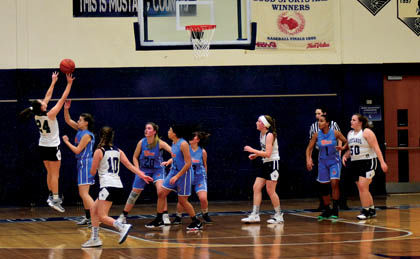 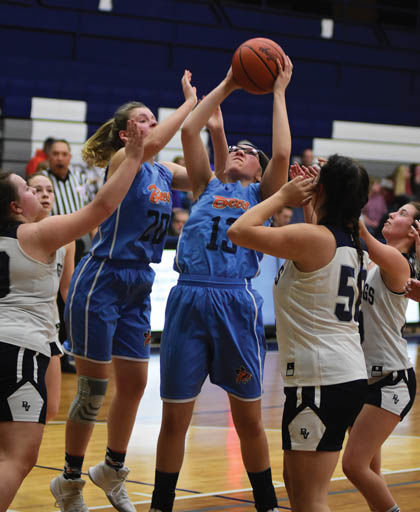 River Valley and Bridgman players soar above the court while battling for a rebound during the Dec. 27 holiday break girls basketbal game.

Alexis McCarty of River Valley (left) and Bridgman’s Bri Russell dive for a loose ball during the Dec. 27 game.

Emma Springer (left) and Elise Schmaltz vie for a rebound.

THREE OAKS — The River Valley High School girls basketball team finished the second quarter of its Dec. 27 game with Bridgman on a 12-0 run to take a commanding 25-7 half-time lead.

River Valley roared out to an 11-3 first-quarter advantage as Emma Springer and Macey Springer each tallied four points while Lucia Rico sank a three-point basket,

Bridgman cut the margin to 13-7 early in the second period as Jalynn Krieger and Elise Schmaltz scored, but the Mustangs answered with a “3” from Rico and never looked back.

A Hailey Hauch bucket was followed by two steals and hoops (with Joanna Vert and Emma Springer scoring) before Rico swished another three-pointer with just three ticks of the clock left in the half after the defense forced a five-second violation.

All of this opened up the aforementioned 25-7 advantage.

“Our press is coming along … we have a lot of athletic players and we’re going to try and use that because we don’t have a whole lot of height,” River Valley coach Jason Alexander said.

Rico said the team is playing more like they do in practice as the season goes on, adding that there is still room to improve.

“I think defense is the most important part,” she added.

Bridgman out-scored RV 12-10 in the third frame as Schmaltz tallied the first two buckets and Olivia Tomlin also sank a pair of shots before Talea LaVanway and Lily Badger got into the act.

But the Bees were still up 35-19 heading into the final period, and the home team went onto own the fourth quarter by a 12-5 margin as Rico and Hauch notched baskets.

Rico finished with a game-high 17 points while Hauch scored 10 and each Springer had 8.

Both teams were missing some players due to the holiday break.