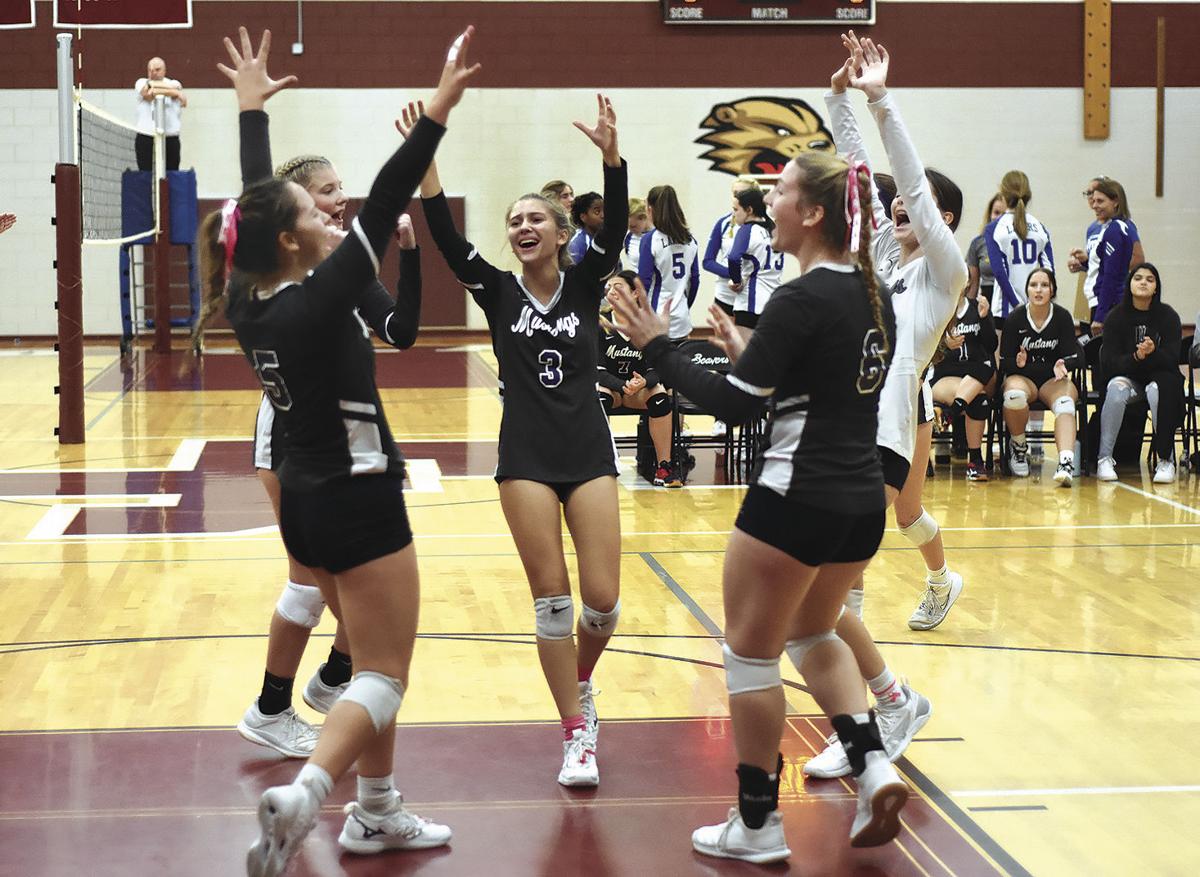 River Valley volleyball players celebrate a point on their way to ultimate victory in the Oct. 30 BCS White Division tournament. 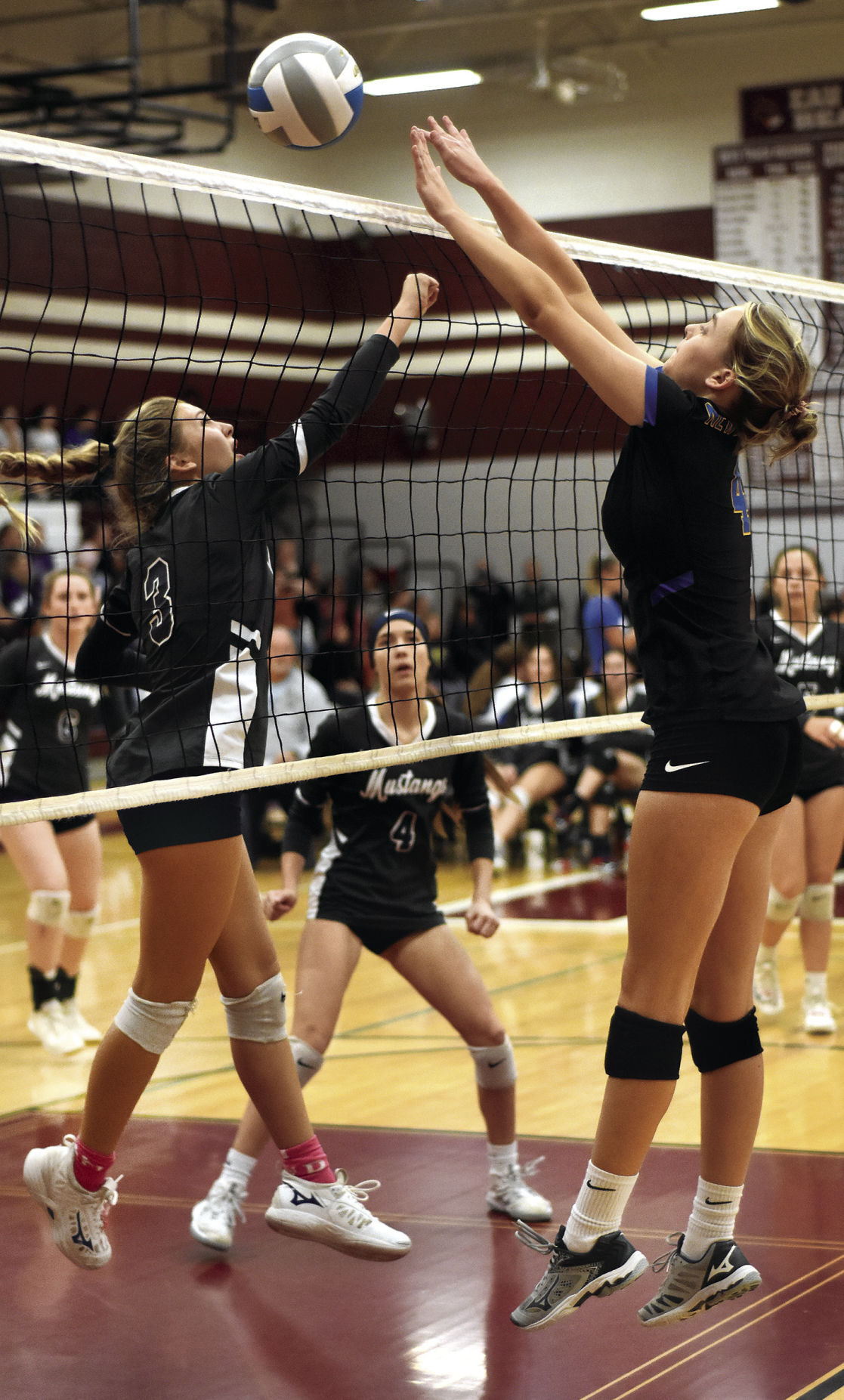 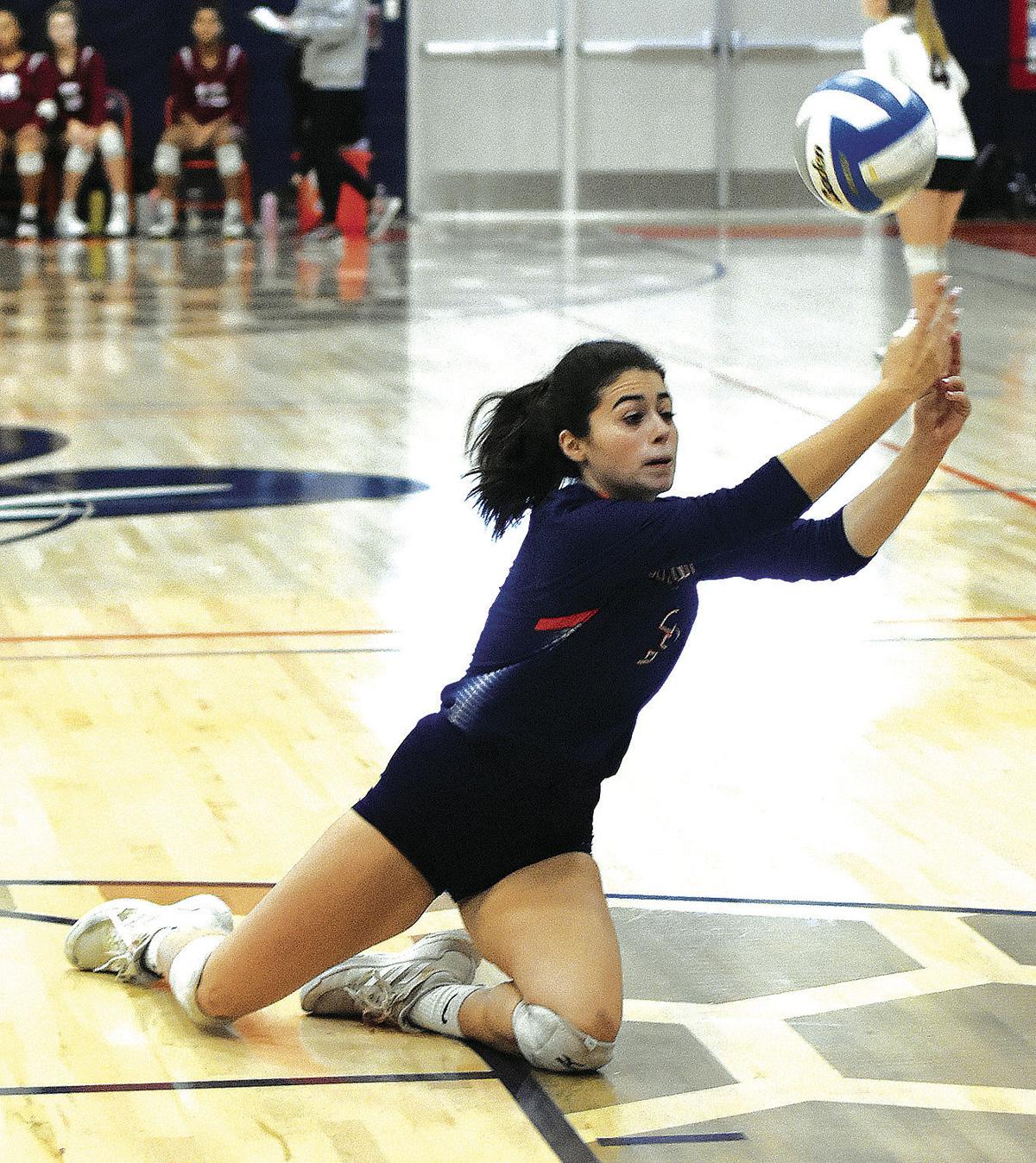 Bridgman’s Bella Gearhart goes after the volleyball on Oct. 23. 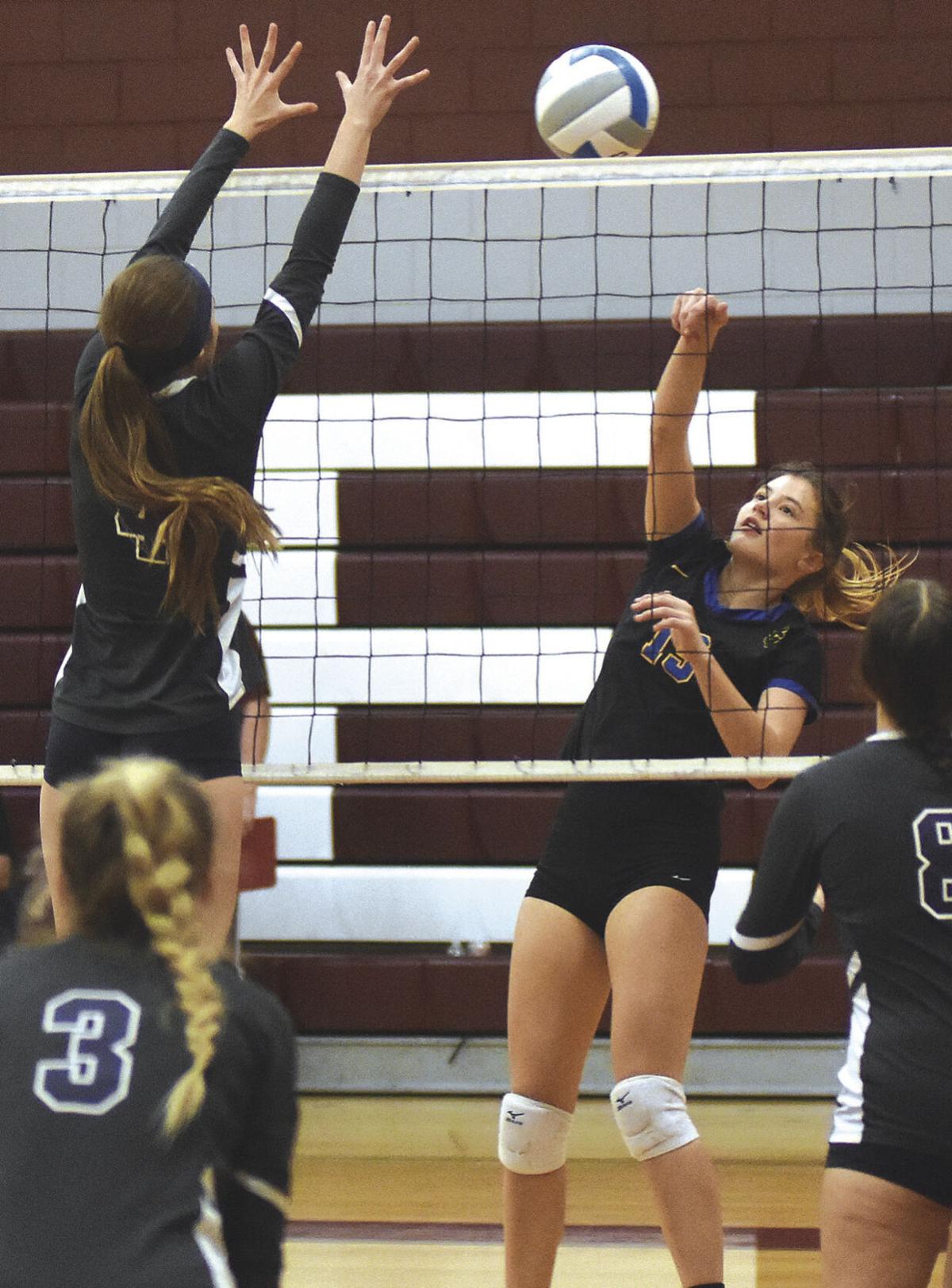 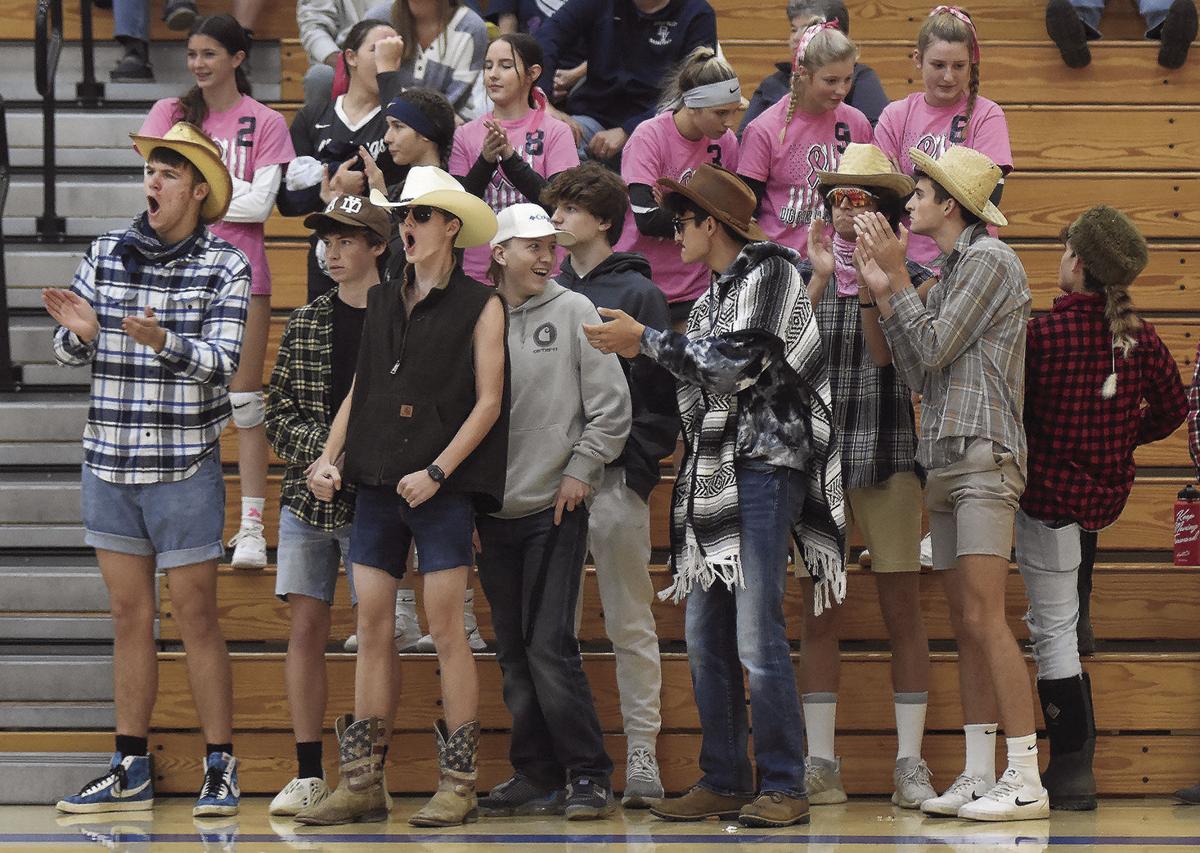 The River Valley student section cheers for the JV volleyball team in New Buffalo on Oct. 27. 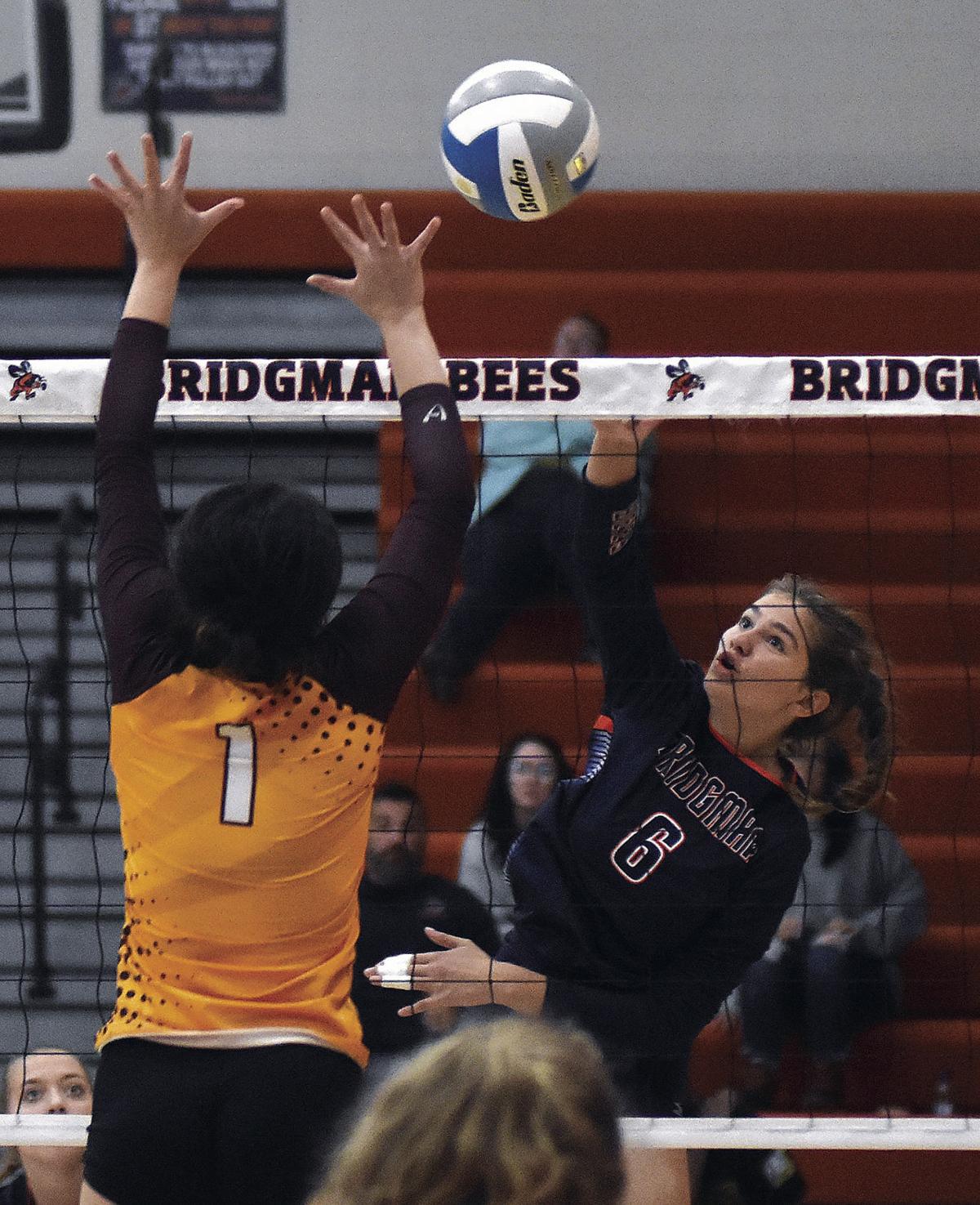 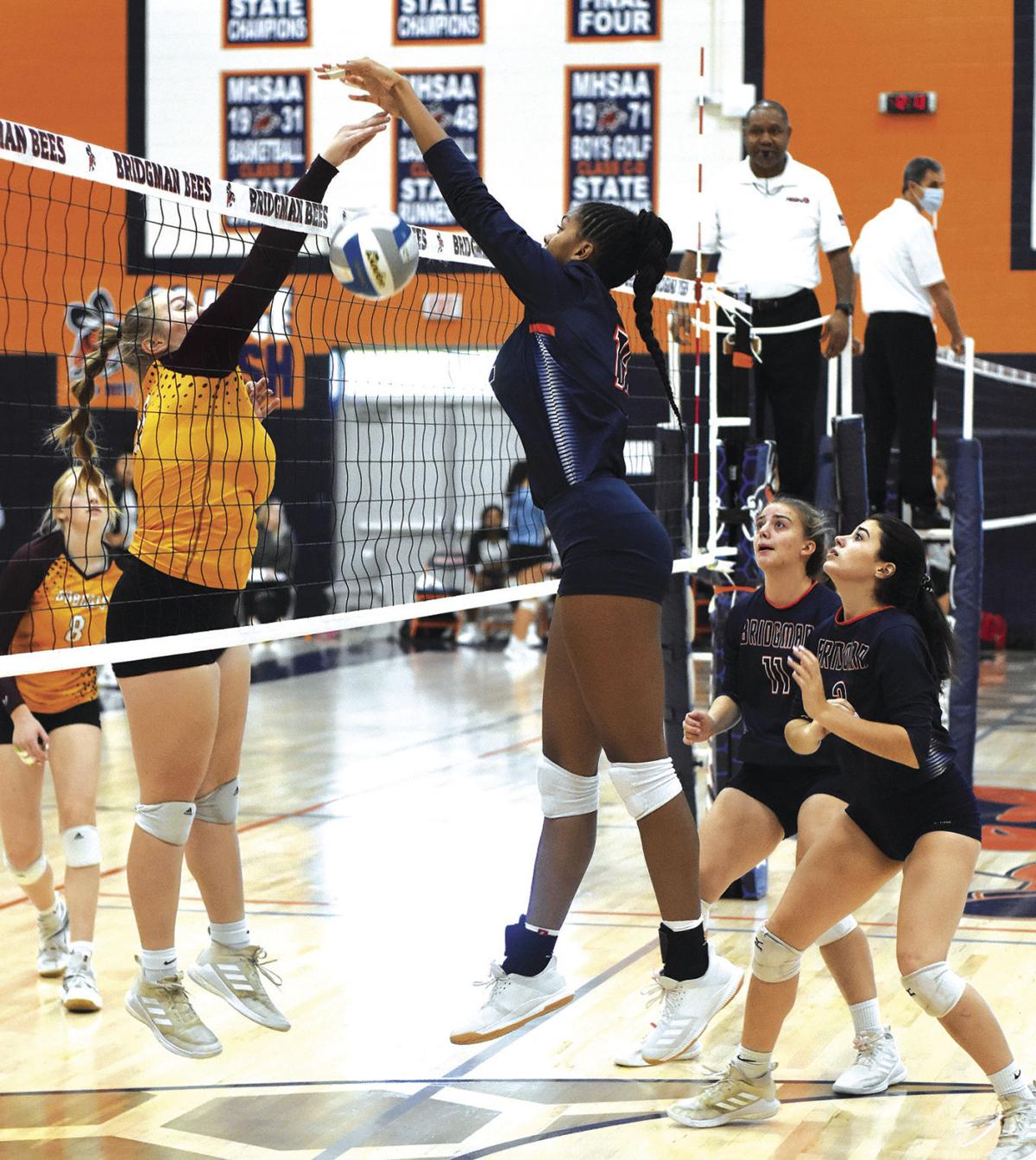 Bridgman’s Tatyanna Hill goes for a block against Brandywine on Oct. 23.

Peyton Oman keeps the volleyball in play for Bridgman on Oct. 23.

River Valley volleyball players celebrate a point on their way to ultimate victory in the Oct. 30 BCS White Division tournament.

Bridgman’s Bella Gearhart goes after the volleyball on Oct. 23.

The River Valley student section cheers for the JV volleyball team in New Buffalo on Oct. 27.

Bridgman’s Tatyanna Hill goes for a block against Brandywine on Oct. 23.

Peyton Oman keeps the volleyball in play for Bridgman on Oct. 23.

“They turned it up when they needed to turn it up, they played well together, they communicated, serves were awesome ... we had a good day,” said head coach Heidi Michaels, who added that the River Valley volleyball program hadn’t won a conference title since 1987.

The first set was nearly a point-for-point draw until the Mustangs busted loose from a 14-13 deficit with a decisive 9-0 run that began on Ashley Strefling’s tip to the gym floor and was fueled by two attack kills and a block from Lexi McCarty. Another McCarty spike to the floor and Strefling’s ace serve completed the 25-15 victory.

River Valley surged into the lead again at the mid-point of the second contest, this time converting a 12-12 deadlock into a 17-12 advantage thanks to kills by Macey Springer and McCarty and a strong play above the net by Natalyn Heckathorn.

The Titans stormed back by reeling off eight straight points – with Abi Marquis contributing a block and a kill, Natalie Ritter getting a pair of attack kills, Reese Garcia acing a serve, and Stella Lyons blocking an RV spike – to give ML a 20-17 lead.

River Valley pulled even at 21-21 as McCarty spiked down three kills and Strefling came through with a point-scoring tip.

Both teams had their chances to win by the required two points (with a tip by Springer foiling one of Michigan Lutheran’s opportunities and a Kayanna Lange ace serve bringing the Mustangs to the brink) before Heckathorn’s strong defensive play at the net finally ended it with the score 28-26 in River Valley’s favor.

“I got shivers,” Heckathorn said of the final moments before the celebration began.

“It felt good, we beat them when it was important,” Strefling said.

The final match before pool play had the Mustangs facing New Buffalo, with the winner advancing into the first place contest against Michigan Lutheran.

The Bison built a 17-11 advantage in the opening set with a series of kills, tips and blocks by Jane Funk, a tip from Ashley Hauseman, an Ashlyn Jones ace serve, and consecutive point-scoring pushes by Shannon DeWit helping build the lead.

Kills by Springer, Hanah Lynch and McCarty powered a Mustang rally that left the score knotted age 19-all.

Lynch then came through with two attack kills and an ace serve, while Springer also spiked the volleyball through the NB defense, to power RV on to a 25-22 triumph.

That late momentum carried over into the second set as River Valley roared out to an 11-4 lead (with McCarty, Lynch, Heckathorn providing kills and Stefling acing a serve).

Two kills from Heckathorn and a Kayanna Lange ace serve helped build the margin up to 22-7, and McCarty smacked down to spikes in the late-going as the Mustangs prevailed 25-8.

Buchanan entered the Oct. 23 BCS Red Division volleyball tournament in first place and left as champions thanks to victories over Brandywine and host Bridgman.

Buchanan completed its unbeaten day with 25-19, 25-18 victories over the host Bees.

“I’m extremely happy with how they played,” Watervliet coach Edie Daugherty said. “It was definitely a team effort with all the girls.”

The Panthers played through a difficult draw, beating defending champion Brandywine on Monday, then a very strong Buchanan team on Wednesday. Daugherty felt it was beneficial for her young team.

“I was excited with the draws that we got,” Daugherty said. “To be able to play on Monday, my team was able to get out their jitters.”

Junior Sam Dietz had 18 kills and sophomore Grace Chisek had 22 assists to lead the Panthers as usual, but many other players had key contributions. Bridgman led 10-9 early in the second game before Allie Pline served up six straight points, including three aces, as the Panthers began to run away with it.

“That was a pivotal point during that match that changed the momentum,” Daugherty said.

Ellie Golden also had a sixpoint serving run late in the second game.

Bridgman had a 15-11 lead in the final game before Watervliet again came back to seal the victory.

Right-side hitter Natalie Hart had a strong defensive performance for Watervliet with a team-high 20 digs.