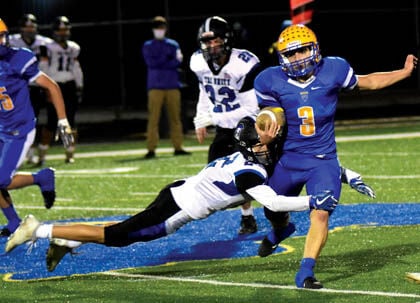 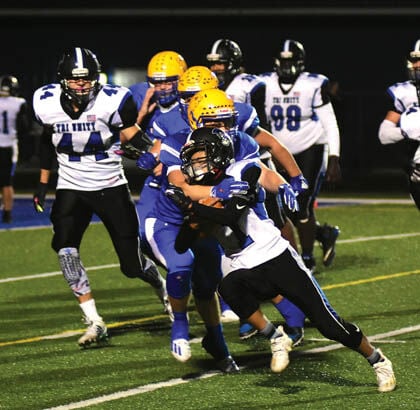 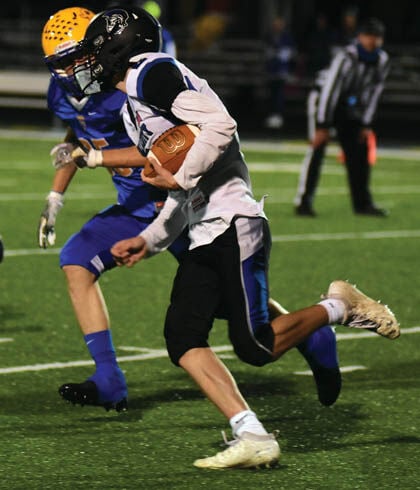 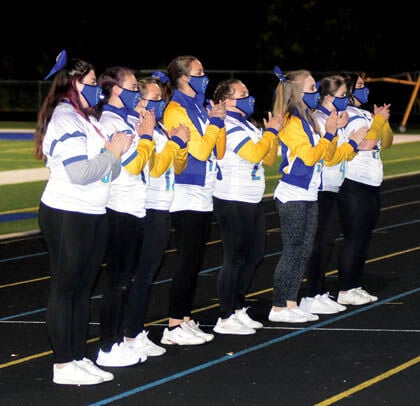 Cheering for the Bison. 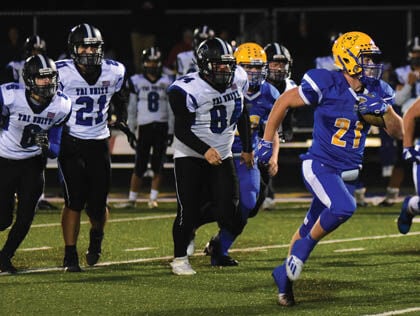 Ben Coffeen sprints away from the Defender defense.

Cheering for the Bison.

Ben Coffeen sprints away from the Defender defense.

After a pair of lopsided road victories the Bison had to battle from behind to edge Wyoming Tri-Unity Christian 28-26.

Coach Matt Johnson said the team had a pretty easy time running whatever offensive plays they wanted the first two weeks against Bangor and Eau Claire, but he knew that wouldn't be the case on week three.

Trailing 26-20 late in the game, the home team pulled even on Ben Coffeen's two-yard touchdown run with 3:14 to go (Coffeen was out for much of the second half due to a leg cramp). His subsequent two-point conversion surge into the end zone gave New Buffalo a lead they would not relinquish.

Michael Bombin picked off a pass by Tri-Unity quarterback Jaden Ophoff at the 1:14 mark of the fourth quarter to seal the deal.

It was a back-and-forth battle all evening.

The visiting Defenders opened the scoring with three minutes left in the opening frame on a 65-yard sprint by Braiden Luurtsema.

Tr-Unity's second touchdown tested the mettle of the Bison. After New Buffalo turned the ball over on downs at the one yard line midway through the second quarter, Ophoff escaped pressure in his own end zone and scampered an official 99 yards to make it 12-0 with showing on the clock.

Bombin (New Buffalo's quarterback) reeled off a long run on his team's next possession to set up first-and-10 at the Defender 13 yard line. Several plays later Bombin fired a touchdown pass to Stephen Margaritis. A two-point run by Coffeen left the score 12-8 with 7:08 remaining in the first half.

The Bison surged ahead 14-12 at the 4:09 mark of the second stanza when Bombin tossed an 11-yard TD pass to Brenden Tanskley.

Tri-Unity re-took the lead by an 18-14 margin in the third quarter after Derek Rowlader recovered a fumble. The possession culminated in a 10-yard TD pass from Ophoff to James Eerdmans with 9:46 left in the third.

New Buffalo answered with a 67-yard touchdown drive that ended on Bombin's 25-yard rush to pay-dirt to leapfrog NB back on top 20-18.

But the Defenders struck back on the ensuing kick-off as Vergel Heath went all the way for six points. A successful two-point pass from Ophoff to Rowlader upped the Tri-Unity advantage to 26-20 with 6:32 to go in the third period.

New Buffalo's winning drive featured a 23-yard gain on fourth down by Tanksley that reached the Tri-Unity 29 yard line.

Johnson said Bombin (who finished with 184 yards and a TD on the ground and threw for 120 yards and two more scores) played a great game, and it was a team effort.

Coffeen rushed for 98 yards, one touchdown and a pair of two-point conversions. Margaritis had six receptions for 66 yards and a TD. The Bison totaled 437 yards on offense.

The Bees scored 46 first-quarter points on their way to the easy win in Southwestern Michigan Eight-Man Football League play.

Bridgman (2-1) got long touchdown runs from Nate Necas (67 yards), Clark Smith (83 yards) and Alec McMartin (85 yards). Reid Haskins had one touchdown each rushing and passing, and Jayce Warren returned an interception 35 yards for a score.