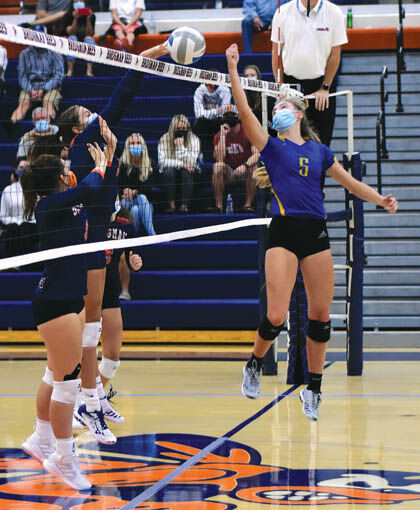 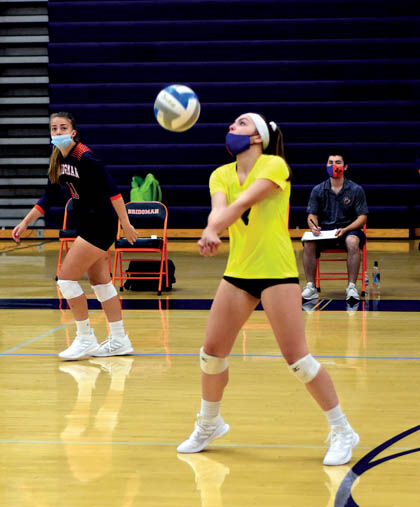 Autumn Brown keeps the volleyball aloft for the Bees. 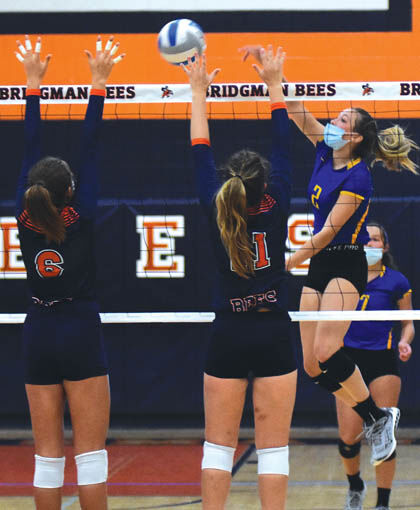 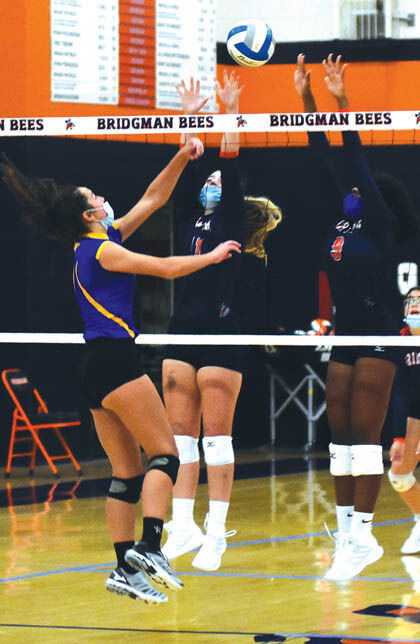 Autumn Brown keeps the volleyball aloft for the Bees.

BRIDGMAN — The Bridgman and New Buffalo high school volleyball teams battled for five sets in a Saturday, Sept. 26, tri-meet hosted by the Bees.

The Bison entered the meet undefeated on the young season, and took the first two contests against Bridgman by 25-22, 25-12 tallies.

The opener was close until New Buffalo reeled of six straight points to transform a 14-13 lead into a 20-13 advantage. Sophia DeOliveira had two kills while Ava Mullen contributed a point-scoring tip and an ace serve.

Bridgman rallied to pull within one (22-21) as Takiya Cornelius had a block, Bella Gearhart aced a serve, and the defense played well.

Two kills by Mullen helped push the Bison on to a 25-22 victory.

New Buffalo built an early 5-0 lead in the second set (Kelsey Corkran had two ace serves and Allie Smith contributed a kill) and the Bison never looked back en route to a 25-12 win.

Bridgman turned the tables in the third game with kills by Peyton Oman, Gearhart and Cornelius helping open up a 17-7 lead. The Bees went on to prevail 25-14.

The third set was tied at 16-all before the Bees got three kills from Cornelius, a spike to the floor from Oman, and a block by Haylee Kanous and Javen Graves to pull even with a 25-20 win.

The fifth and final contest (played to 15 points) was tied up at 5-5 when the Bison made their move.

A tip and an ace serve by DeOliveira, kills by Emma Lantz and Mullen, and a point-scoring tip by Corkran helped New Buffalo push on to a 15-8 victory.

New Buffalo coach Kevin Labaj said his team just has to keep pushing, adding that it sometimes takes them a while to wake up in morning matches.

Bridgman coach Jim Ragosta said the Bees are young, but "grew up a little bit in that match as a team."