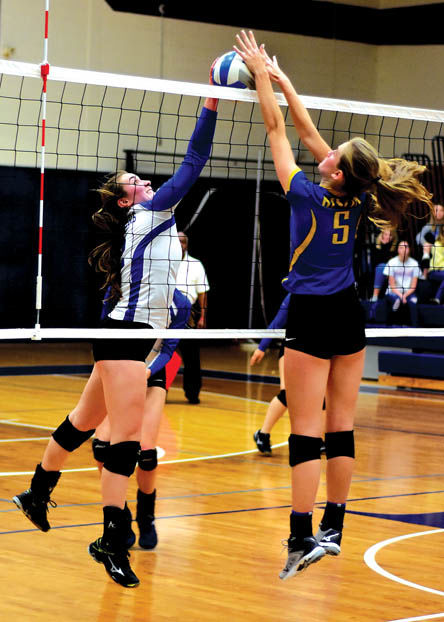 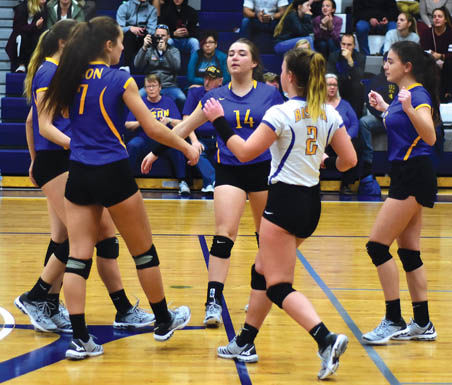 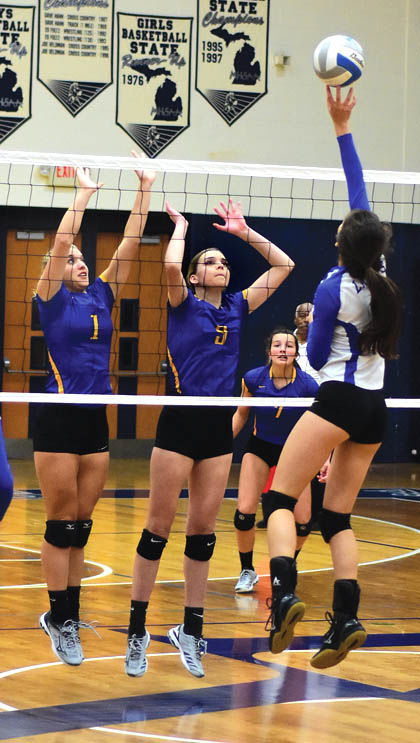 Maggie Tidey of Lake Michigan Catholic (from right) looks to hit the ball over New Buffalo defenders Ashley Hauseman (No. 9) and Mary Mayer (No. 1).

Maggie Tidey of Lake Michigan Catholic (from right) looks to hit the ball over New Buffalo defenders Ashley Hauseman (No. 9) and Mary Mayer (No. 1).

New Buffalo jumped out to a 15-1 lead to start the first set. Lake Michigan Catholic responded with a 16-6 run of its own to trim the lead to 21-17 before the Bison pulled away to win the set. Sophia DeOliveira came through with two kills in the late going for New Buffalo.

“It was a game of runs,” LM Catholic coach Ashley Pagel said. “New Buffalo’s serve-receive gave us a lot of problems tonight but we were able to battle back, for the most part.”

Set two began the same way as set one with the Bison using a 16-5 run to take a 20-11 lead. But the Lakers stormed back with a 15-5 run of their own to take a 26-25 lead before the Bison scored three straight points to win the set. Kelsey Corkran served up an ace for the 28th and final point.

"Just got to keep serving, get it over," Corkran said.

“I think the girls got too comfortable when they get a lead like that,” New Buffalo coach Kevin Labaj said. “One of the things I stressed is that we can’t predict the future, but we can make the future. We need to come out and play hard every single play no matter what.

“In the end there, we made fewer mistakes. We still played to win; we didn’t try to play not to lose the game.”

The Bison had a strong start to set three as an Ava Mullen kill gave the team a 5-2 lead. New Buffalo jumped out to a 17-6 lead and was able to prevent another Laker run.

"We definitely got a lot more blocks that game," Mullen said of the finale.

Sophia DeOliveira tallied 12 kills and nine digs for the Bison and Mullen had three aces 10 Kills five blocks and five kills. Mullen, along with Kelsey Corkran, have made an impact on the team as freshmen.

“Ava is a beast in the middle with blocks and kills and Kelsey had a phenomenal day serving,” Labaj said. “If we can get (Kelsey) to come around on her hitting and passing, I don’t think we’re gonna be stopped.”

The district title match is scheduled for 7 p.m. Thursday, Nov. 7, at River Valley.

With the Lakers’ season coming to an end, the team loses Lage and Elena Proos to graduation. Lake Michigan Catholic hopes the experience gained this season will pay dividends going into next season.

“These girls have so much heart,” Pagel said. “I would say the girls peaked at the end of the season and played our best volleyball. To play an experienced New Buffalo team as closely as they did says a lot about how far they’ve come.”

Michigan Lutheran took control of its match with Eau Claire and never let up. Mara Rugen led the Titans with 11 kills and Katie Rainey had seven digs.

“We aren’t taking anyone lightly,” Michigan Lutheran coach Bruce Molineaux said. “The kids were ready to go. I stressed serving and passing the ball. If you can serve and pass you’ll usually be in a good position.”

Michigan Lutheran was slated to face Countryside at 5:30 p.m. Nov. 7 in a district semifinal.

The Beavers graduated just one player from their young roster. Head coach T.I. Ferry is optimistic about the program’s future.

“The group of girls that we finished with was a very close-knit family,” Ferry said. They were

a fun group to coach; we will miss this group as a whole. We expect to be more improved on the court next year.”

The district title match is scheduled for 7 p.m. Thursday, Nov. 7, at River Valley.