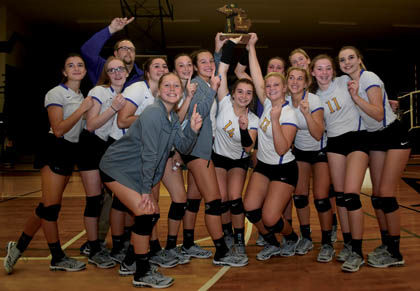 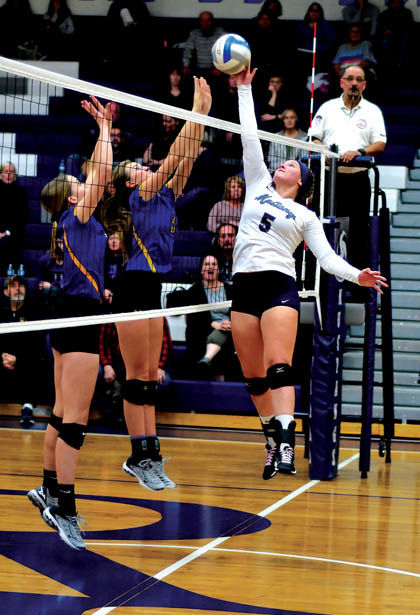 Ashley Hauseman and Kelsey Corkran of New Buffalo (from left) look to block a tip by Emma Springer of River Valley during district semifinal action. 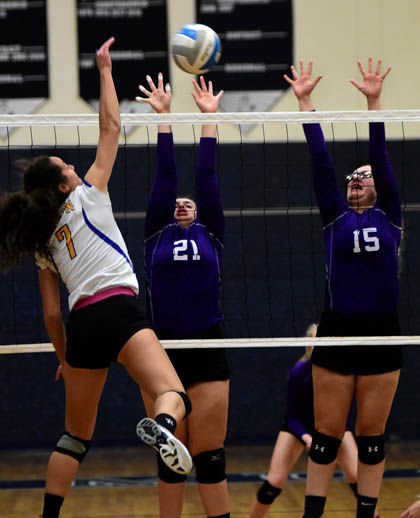 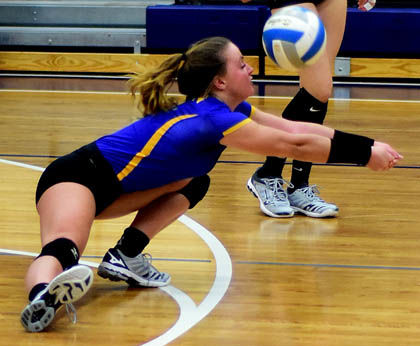 Rachel Hofstetter digs up the volleyball for New Buffalo. 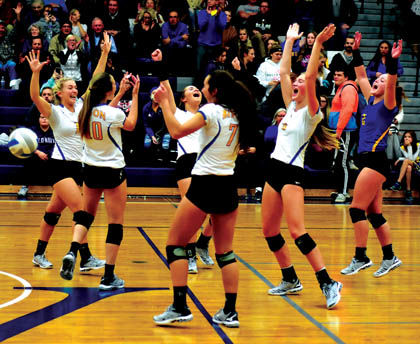 Ashley Hauseman and Kelsey Corkran of New Buffalo (from left) look to block a tip by Emma Springer of River Valley during district semifinal action.

Rachel Hofstetter digs up the volleyball for New Buffalo.

“It feels good, it hasn’t been done in a long time and I’m glad to be a part of it,” said senior Mary Mayer, the Bison’s setter.

“It means a lot because of who we went against,” added Sophoa DeOliveira, a junior hitter.

The first set was a back­-and-forth affair. An Abby Harris block gave the Ti­tans a 17-16 lead before the Bison rallied to take the set.

“Once we got past that, we took off. Serving in the first set was hinder­ing us. In the second and third set, we changed some things up and we caught fire and didn’t look back.”

New Buffalo jumped out to a 9-4 lead in set two. Michigan Lutheran re­sponded with a 7-3 run to trim the lead to one before the Bison countered with a 6-2 run that allowed them to stay ahead for good.

Set three was all New Buffalo, which led by as many as 10 points before winning by nine.

“I talked to them in the third set about and told them that this game is go­ing to feel like you’re car­rying a 100-pound bag up Mt. Everest,” Labaj said. “If you see people climb­ing the mountain, they climb in teams; they’re tied to each other. I told them that if they work together, there’s nobody that can beat us.

“Everything was click­ing. They had a feeling that they were going to win. They were making their future happen and everything went according to plan.”

“Every time we got close, we’d make an er­ror or they’d get a kill,” Michigan Lutheran coach Bruce Molineaux said.

“They stayed ahead of us and we couldn’t get over the hump. They have some awfully good hitters. They’re a good team and deserved to win. My kids hustled out there and gave it their all.”

The Bison were scheduled to face top-ranked Mendon on Nov. 12, in the Division 4 regional semifinal at Martin (the program’s first regional appearance since 2013).

New Buffalo moved on to its first regional appearance since 2013. The Bison were defeated by top-ranked Mendon on Tuesday, Nov. 12, in the Division 4 regional semifinal at Martin.