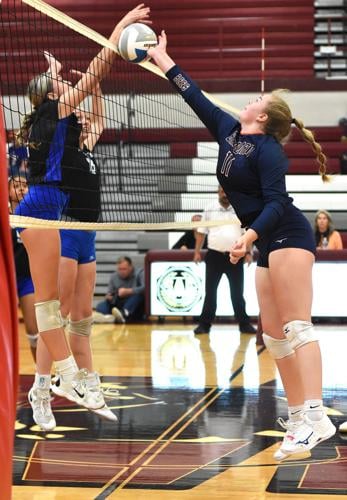 Bridgman’s Kaylee Scheffler-Schebel (right) goes up against Rylie Burks of Cassopolis on Oct. 31. 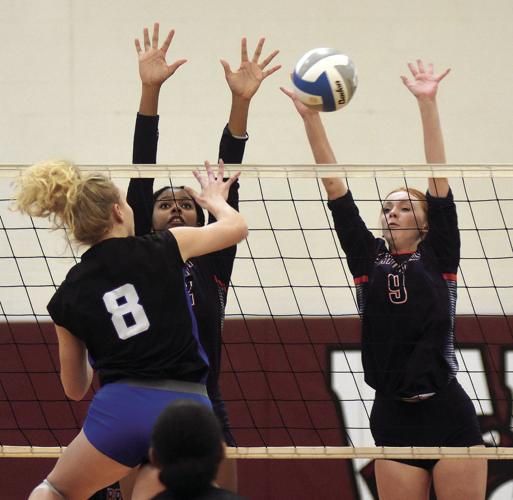 Bridgman teammates Ava Starbuck (from right) and Tatyanna Hill look to block a spike by Katherine Gregory of Cassopolis on Oct. 31. 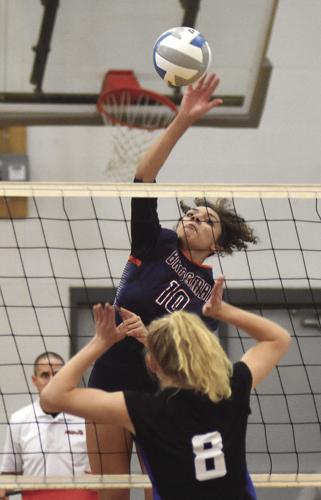 Bridgman’s Takiya Cornelius hits against Coloma during the first round of the Division 3 volleyball district in Watervliet.

Bridgman’s Kaylee Scheffler-Schebel (right) goes up against Rylie Burks of Cassopolis on Oct. 31.

Bridgman teammates Ava Starbuck (from right) and Tatyanna Hill look to block a spike by Katherine Gregory of Cassopolis on Oct. 31.

Bridgman’s Takiya Cornelius hits against Coloma during the first round of the Division 3 volleyball district in Watervliet.

“Consistency was the key,” Watervliet coach Edie Daugherty said. “Any playoff game is emotional on both sides, but if you can stay steady and consistent throughout the match, you have a more positive outcome at the end.

“My leadership on the court, my seniors did a great job emotionally keeping the team together, positive throughout the entire match.”

“It hasn’t really set in that this is our last home game as seniors,” Watervliet standout Samantha Dietz said. “But I’m glad, it’s awesome. Regionals are at Coloma, so maybe we’ll get a crowd close to home.”

Watervliet took a 22-9 lead in the opener before Bridgman (41-7-2) answered with 16 straight points.

Tatyanna Hill had five kills and a block during that stretch, Takiya Cornelius added three kills, and Peyton Oman handled the serving, contributing a pair of aces along the way.

Watervliet’s experienced lineup wasn’t rattled. The Panthers jumped ahead 14-4 in the second game. Bridgman never got closer than six the rest of the way, and back-to-back kills by Dietz and Natalie Hart ended it at 25-15, tying the match at a game apiece.

“We all know how to help each other, lift each other up, what gets people going,” Dietz said. “We’ve all been playing with each other longer than high school, so it’s been great to stick together. It helps a lot.”

The third game was close much of the way. With the score tied at 14, Hart scored a kill to give Watervliet the lead for good, then served up seven straight points, including a pair of aces, to make it 22-14. Myah Hobson finished off the 25-16 win with a kill.

Bridgman maintained a small lead for most of the fourth game. The Bees were up 16-14 before Watervliet scored seven straight, including four aces by setter Grace Chisek, to take control. Hart closed out the match with two straight kills.

“It was a good match,” Bridgman coach Jim Ragosta said. “District championships are supposed to be two good teams, and that’s what it was. We didn’t get to the point where we wanted to, but Watervliet’s a very good team. It was fun playing against them.”

Dietz led Watervliet with a game-high 22 kills and Hart had 17. Chisek had 40 assists and 23 digs, and Tia Caldwell added 19 digs.

Cornelius led Bridgman with 15 kills and Hill added 13. Oman had 22 digs and Bella Gearhart 32 assists for the Bees, whose 41 victories set a new school record.