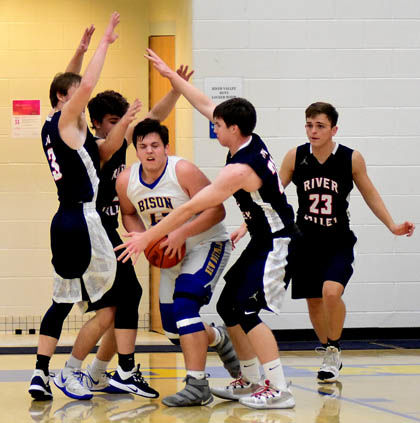 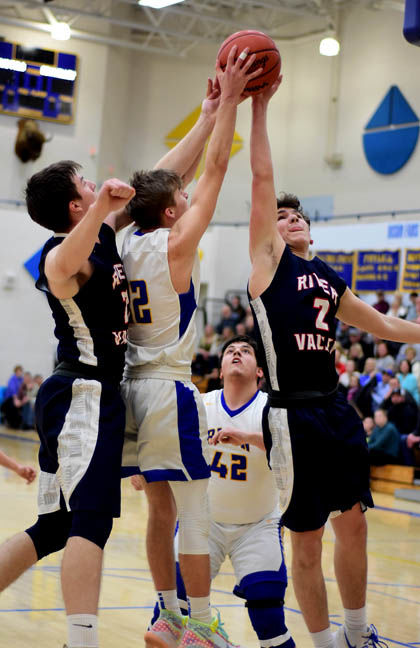 Reaching for a rebound on March 5 are (from left) Matthew Schmidt of River Valley, New Buffalo's Anthony Lijewski and Lennon Lange of the Mustangs. 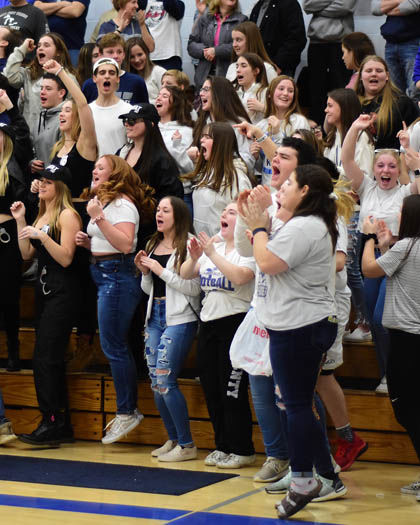 River Valley fans get fired up as the Mustang boys basketball team closes in on the conference crown. 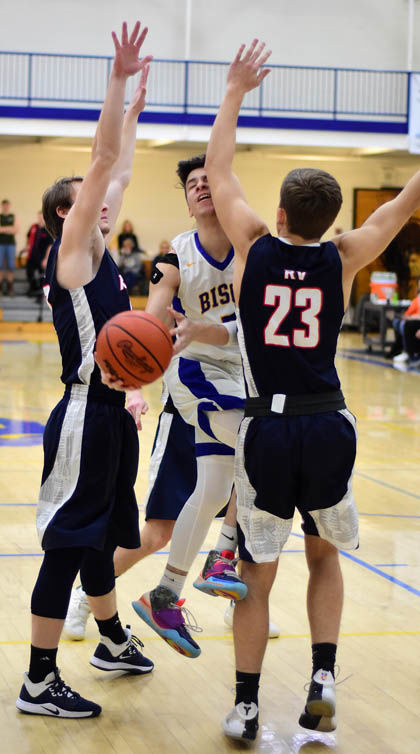 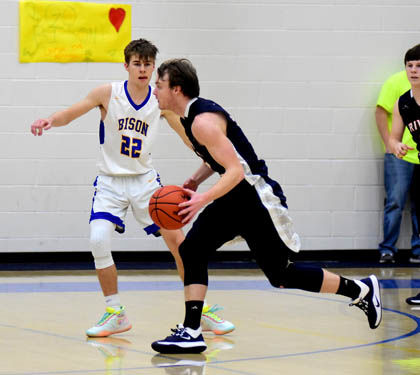 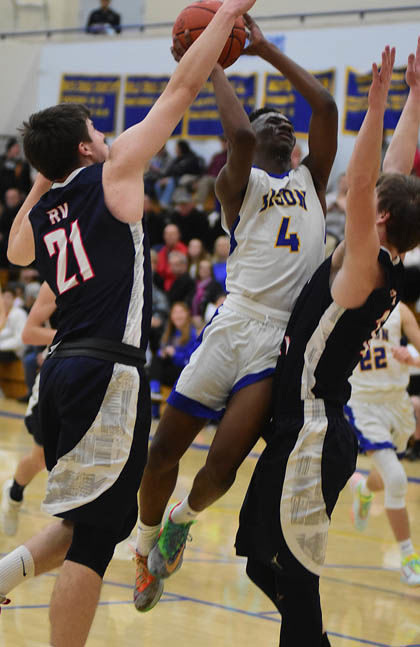 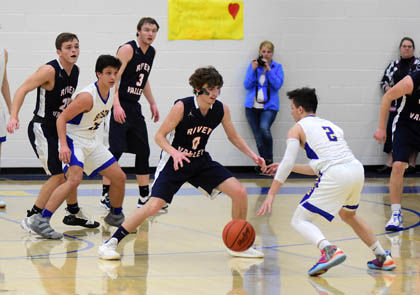 Kaden Parmley of New Buffalo (right, with ball) looks for an opening against the River Valley defense.

Reaching for a rebound on March 5 are (from left) Matthew Schmidt of River Valley, New Buffalo's Anthony Lijewski and Lennon Lange of the Mustangs.

River Valley fans get fired up as the Mustang boys basketball team closes in on the conference crown.

Kaden Parmley of New Buffalo (right, with ball) looks for an opening against the River Valley defense.

The Mustangs defeated the Bi­son 50-29 to win the outright Berrien-Cass-St. Joseph White Division championship. It was River Valley’s first league title since winning the Lakeland Con­ference crown in 1992-93.

“I was really proud of them,” River Valley coach Jason Heckathorn said. “New Buffalo is a dangerous team and getting off to a good start was key for us.”

But the Bison refused to back down.

New Buffalo turned up its press defense to trigger a 19-3 run that made it a 27-23 game midway through the third quarter.

“New Buffalo is scrappy,” Heck­athorn said. “They battled relent­lessly. We made some mental mis­takes and weren’t as crisp. Their quickness and tenacity forced us into mistakes and they capitalized on it.”

A Lennon Lange basket stopped the bleeding for the Mustangs and kick-started a 23-6 run to end the game. Foul trouble that plagued the Bison throughout the game put River Valley on the free-throw line, where it made 13 of 18 in the second half.

“We fell down huge and then we come back,” New Buffalo coach Nate Tripp Sr. said. “We don’t remain disciplined to our system; we get off track. We’re a team made up primarily of sophomores and we lose our way sometimes. It hurt us, it really did.”

“We kept our cool, kept our heads up, stayed in it and we got the win.” Lange said.

Heckathorn was proud of his team’s mental toughness and their desire to bring a conference title back to River Valley.

“That was our number one goal this season,” he said. “We had a few ups and downs but for the most part, we worked hard to achieve that goal. The pressure was on us tonight. It feels great; this is a deserving group of kids.

RV player Levi Strauss credited the team’s defense for being “our best offense.”

Shaw scored eight points for the Bison and Anthony Lijewski added seven. Losing a chance to share the conference championship on their home court was tough, but Tripp hopes his Bison use the loss as fuel for a postseason run.

“I like that our guys were hurt tonight,” he said. “It showed that they cared; they were upset. (Today) we’re practicing after school. It’s a new season. We’ll be ready for whoever we face.”

With a conference title in tow, the Mustangs look to carry the momentum into districts next week (New Buffalo is the defending district champion).

- David Johnson contributed to this report