Skip to main content
You are the owner of this article.
Edit Article Add New Article
You have permission to edit this article.
Edit
Home
News
Features
Sports
Photo Galleries
Opinion
Obituaries
Community
Classifieds
Jobs
How Do I?
1 of 8 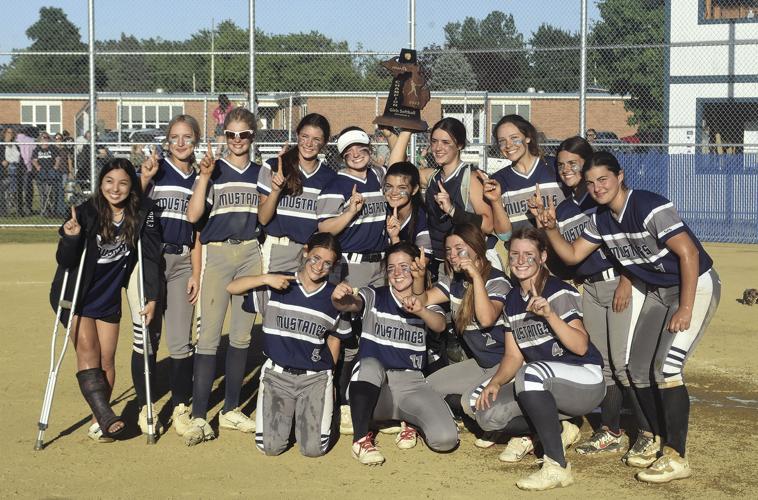 Members of the River Valley High School softball team gather around the Division 4 district trophy they won on June 3. 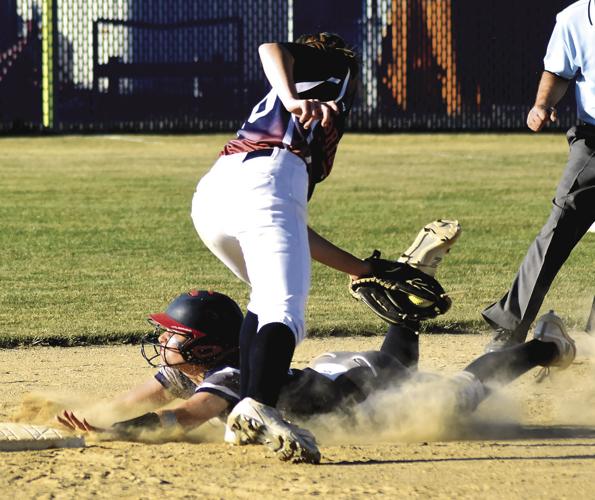 Alexis McCarty of River Valley reaches for second base on June 3 while Bridgman shortstop Kaylee Shuler applies the tag during the Division 4 district title game. 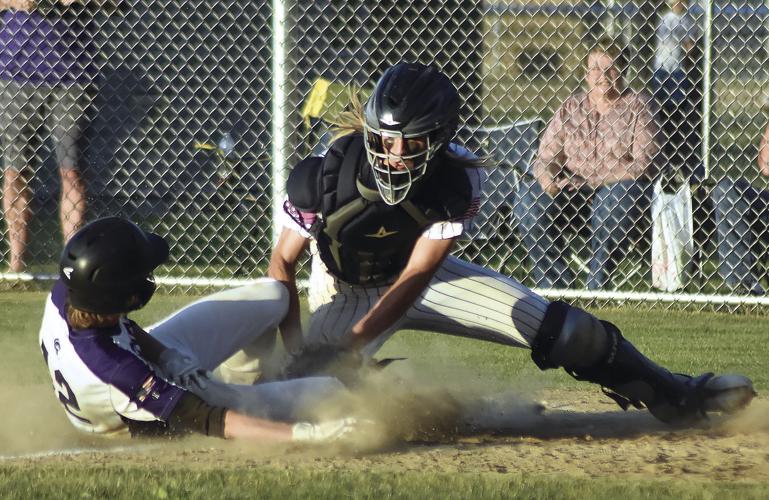 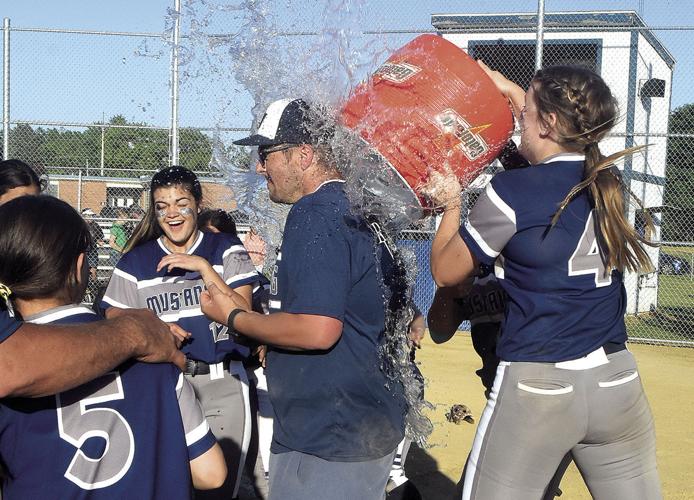 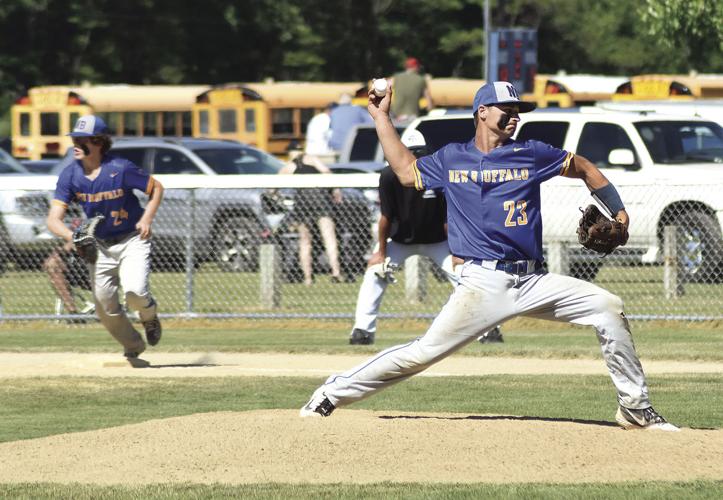 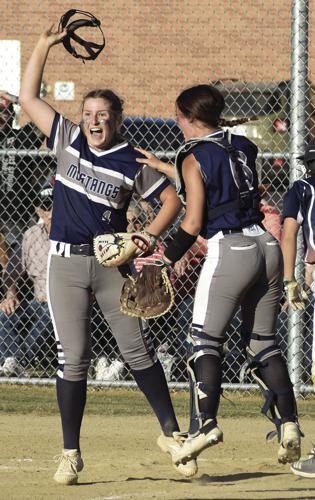 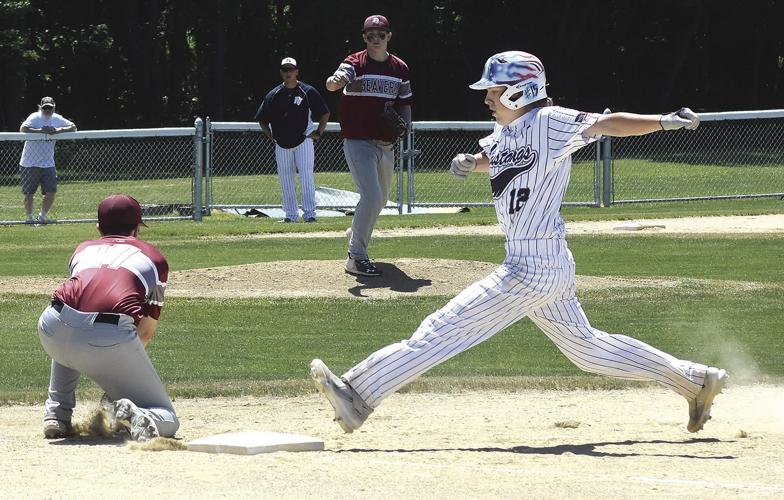 River Valley’s Aiden Coy (right) gets back to first base during a June 3 district semifinal game with Eau Claire. 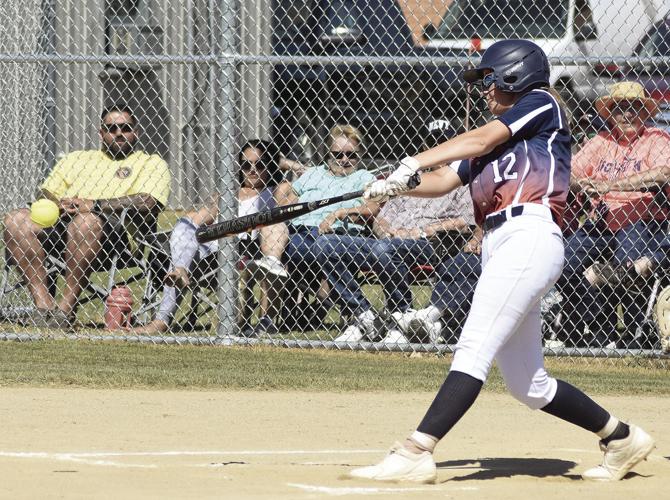 Elise Schmaltz puts the ball in play for Bridgman during a June 3 district semifinal game against New Buffalo.

Members of the River Valley High School softball team gather around the Division 4 district trophy they won on June 3.

Alexis McCarty of River Valley reaches for second base on June 3 while Bridgman shortstop Kaylee Shuler applies the tag during the Division 4 district title game.

River Valley’s Aiden Coy (right) gets back to first base during a June 3 district semifinal game with Eau Claire.

Elise Schmaltz puts the ball in play for Bridgman during a June 3 district semifinal game against New Buffalo.

THREE OAKS — The River Valley High School softball team on June 3 reclaimed the Division 4 district crown it has now won in six of the last seven years a trophy was handed out with a nail-biter of a 5-4 win over defending champion Bridgman.

The game opened with a momentum-shifting moment that fueled a strong Mustang start.

Emme Slavens crushed a two-out home run over the left field fence in the top of the first inning, but after Slavens was back in the dugout the RV bench appealed to the home plate umpire that she had failed to touch the plate and he called her out.

River Valley then jumped on the stunned Bees for three quick runs as Lexi McCarty singled, Kora Kennedy joined her on the bases with a bunt single, McCarty came home on a wild pitch, Hanah Lynch laid down a run-scoring bunt single, and Macey Springer singled to drive in the third run.

“That’s a game-changer, momentum from the start,” said River Valley head coach Dan Schaser, who added he though having the last at-bat was important in the game.

The middle portion of both line-ups did much of the damage on offense.

For the Mustangs Lynch and Kursten Smith (the fourth and fifth batters) made major contributions, with Lynch scoring three runs and driving in one on three hits while Smith had a pair of hits and two runs batted in.

Despite the home run that wasn’t, Slavens (third in Bridgman’s batting order) went 3-for-4 with two runs scored and one batted in. The next three batters also contributed to a 10-hit attack — Johnson went 2-for-3 with a double and a run scored, Brianna Russell had two hits and an RBI, and Gearhart had a hit and two RBI.

But heading into the seventh inning River Valley held a seemingly solid 5-2 advantage — a lead that the Bees nearly overcame.

Lynch had bunted in a run in the third inning and scored run number five in the fifth frame thanks to Kursten Smith’s base hit.

Bridgman broke the scoring ice in the fourth inning as Hannah Johnson doubled and eventually came home on a dropped third strike.

Bella Gearheart singled in a run in the sixth stanza for Bridgman’s second run.

The Bees seventh-inning rally began with Kaylee Shuler’s one-out double and a run-scoring triple off the bat of Slavens. After Johnson was intentionally walked, Bri Russell singled in Slavens to make it a one-run game (5-4).

The Mustangs sealed the deal when a two-out passed ball caromed off a pole behind the plate and landed in the glove of catcher Ava Holub, who was able to tag out a sliding baserunner looking to tie things up.

Springer scattered 10 hits while striking out 7 and walking one.

“Last year I was pretty nervous, so this year I knew that I could do it,” Springer said. “I had confidence in my team, I knew they had my back.”

River Valley was boosted by several strong defensive plays including a diving catch in foul territory by McCarty and some clutch glove work by Kennedy in center field.

“I just hustled for it and dove,” McCarty said of a play that helped keep the Bees at bay.

RV advances to the regional round on Saturday, June 11, at Mendon, playing in the 10 a.m. semifinal against Athens.

It will be the Mustang’s sixth trip to regionals in the last seven years that high school softball was played (there was no 2020 season due to COVID).

The Bees captured the 2021 district championship over the Mustangs by an 8-0 score.

Kalamazoo Christian (the team Bridgman bested 5-1 in last year’s regional title game on the way to the program’s first-ever state final four appearance) faces the host Hornets in the second June 11 regional semifinal, with the championship game to follow.

The River Valley High School baseball team carried a one-run lead (5-4) into the bottom of the ninth against Michigan Lutheran in a hard-fought June 3 Division 4 district title game.

But the Titans were able to tally two runs as darkness was creeping in to emerge with a 6-5 victory for the program’s first district crown since 2009.

Ethan Izydorski walked in the RV ninth before stealing second and scoring on an error.

Michigan Lutheran (22-5) took advantage of some River Valley fielding miscues in the bottom of the ninths as Micah Herbst and Ty Johnson came through with RBI base hits to end the action.

Michigan Lutheran beat New Buffalo 10-0 in the other semifinal.