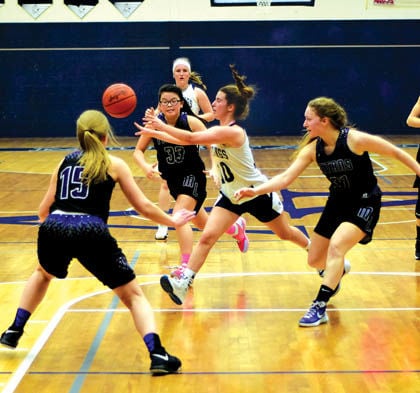 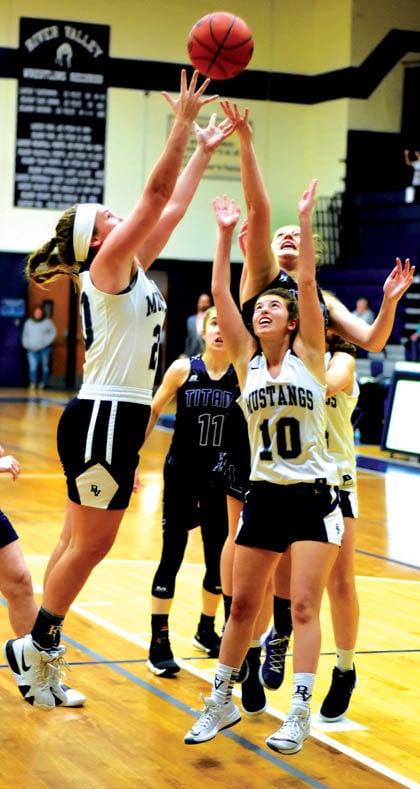 River Valley players including Emma Springer (left) and Lucia Rico (No. 10) reach for a rebound during the Jan. 10 game against Michigan Lutheran. 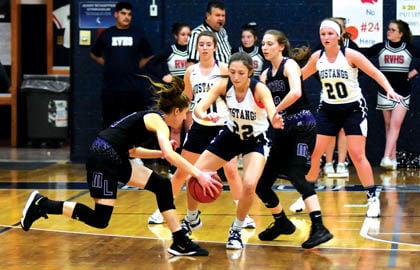 Mara Rugen (left, with ball) of Michigan Lutheran looks for an opening against River Valley’s Taylor Volstorf (No. 22) during the Jan. 10 game. 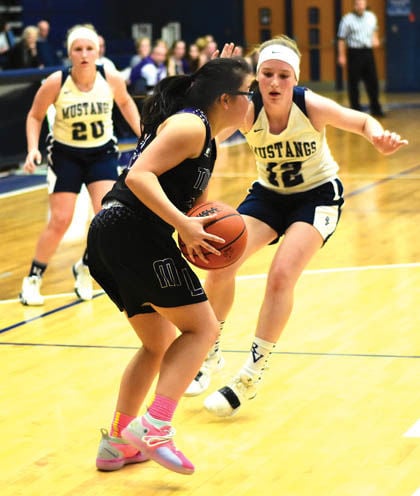 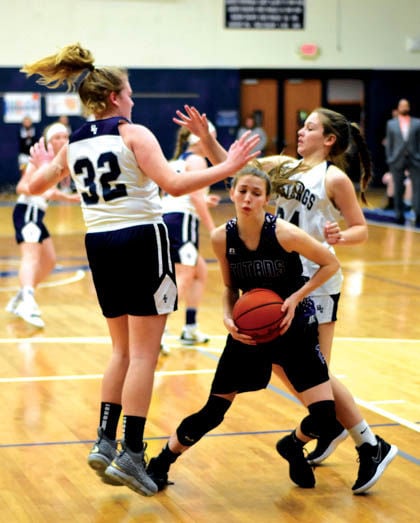 River Valley players including Emma Springer (left) and Lucia Rico (No. 10) reach for a rebound during the Jan. 10 game against Michigan Lutheran.

Mara Rugen (left, with ball) of Michigan Lutheran looks for an opening against River Valley’s Taylor Volstorf (No. 22) during the Jan. 10 game.

The Titans used a strong second half to come away with a 46-31 win over the Mustangs in Berrien-Cass-St. Joseph White Division play.

“We knew it was going to be a great game, especially on their home floor,” Lutheran coach Ron Briney said. “We did our homework and expected what we saw tonight. I was very proud of the kids for what they accomplished here by playing together and beating a very good River Valley team.”

Jessi Jewell scored 10 of her 12 points in the first quarter to help the Titans to an 18-11 lead after one period of play. Michigan Lutheran led by as many as 11 in the second quarter before a Joanna Vert 3-pointer capped a 9-4 Mustangs run to cut the Titans’ lead to 26-20 at halftime.

The Titans’ press defense sparked an 8-2 run to start the third quarter. Michigan Lutheran’s Mara Rugen scored nine of her game-high 21 points in the frame. Offensive rebounds from Rebekah Hisle and Abby Harris led to second-chance points for the Titans.

“Jessi did a great job of getting us on the board offensively,” Briney said. “She did a lot of neat things and I want her to continue to be aggressive there. Mara is a tremendous defensive player. That defense triggers a lot of offense. Her speed helps on offense and defense helps balance our team.”

The Mustangs weren’t able to get set in their offense against the Titans’ press and scored just 11 points in the second half. The Titans led by as many as 17 in the fourth quarter.

“We gave them way too many second-chance baskets,” Mustangs coach Jason Alexander said. “In key situations, we turned the basketball over. We can’t do that against a team of that caliber.”

River Valley was led by Lucia Rico’s nine points while Macey Springer added eight. The loss dealt a blow to the Mustangs’ hopes for a conference title, but they’re still very much in the race.

“Our goals haven’t changed since day one,” Alexander said. “We can finally say we’re one of the top teams in the conference. We’ve been to the district finals three times. Hopefully the fourth time will be the charm for us.”

“We’re beating up on each other,” Briney said. “For us to be 2-0 against those two teams gives us a leg up to start with but doesn’t give us anything beyond that. That just means they’re going to play that much harder next time, which is what high school sports are all about.