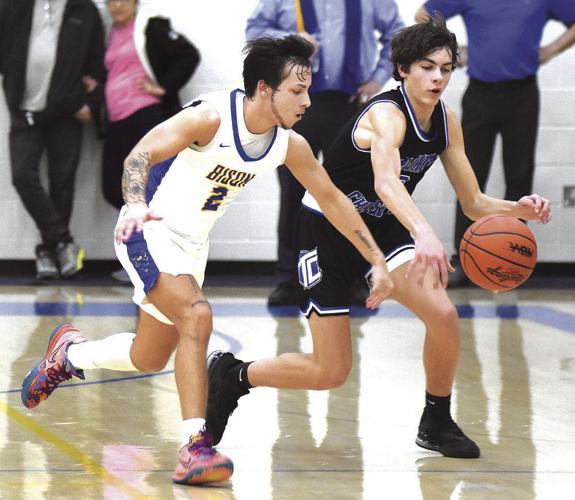 Kaden Parmley of New Buffalo (left) goes for a steal against Tri-Unity’s Owen Rosendall on March 16 during the regional championship game. 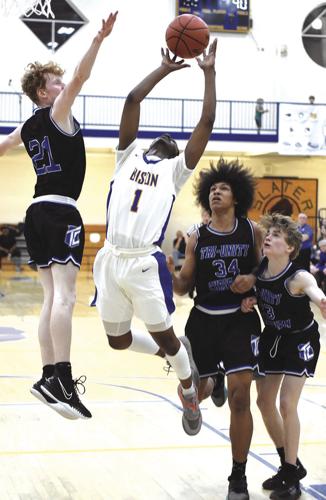 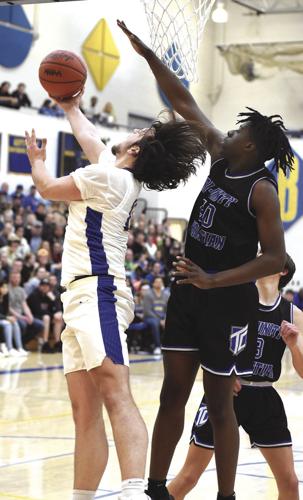 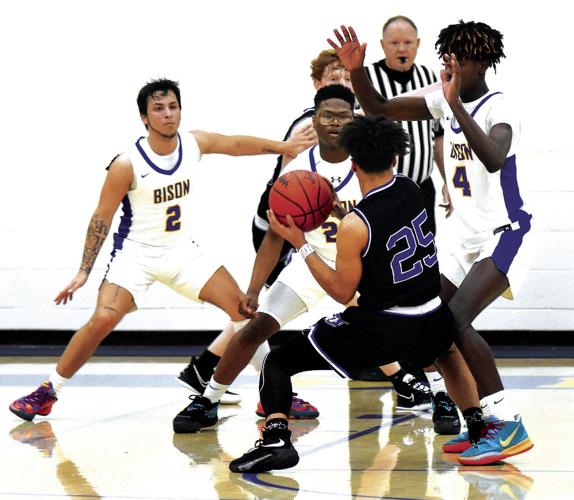 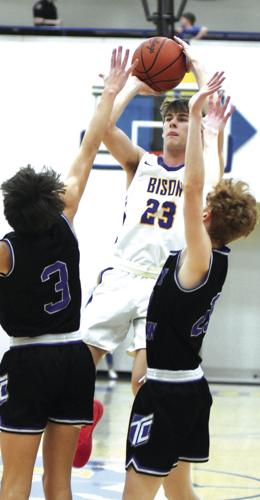 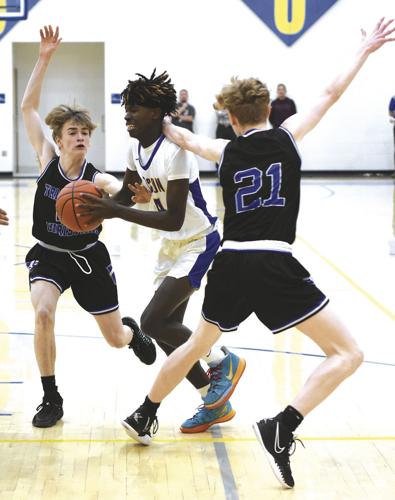 Jeremiah Mitchell of New Buffalo (center) looks for an openng against the Tri-Unity defense.

Kaden Parmley of New Buffalo (left) goes for a steal against Tri-Unity’s Owen Rosendall on March 16 during the regional championship game.

Jeremiah Mitchell of New Buffalo (center) looks for an openng against the Tri-Unity defense.

The appropriately-named Defenders jumped out to an early 10-1 advantage as Titus sank a pair of three-pointers. He reached 10 points late in the first period on a lay-up that extended the lead to 14-2.

It didn’t get any easier for New Buffalo in the second quarter.

An inside bucket by Hanif James, a Aidan DeKlen “3,” and another long-range shot off the hands of Titus helped open up a 24-8 Tri-Unity margin.

After Anthony Anderson sank a three-pointer for NB to make it 24-11, Titus came through with consecutive baskets to end the half with the Defenders on top 28-11.

Titus had accounted for 19 of those first-half points, and he would finish with a game-high 35 points to go with 9 rebounds and three steals.

New Buffalo made a run at the Defenders in the fourth stanza, with a scoop shot from Ryan Vinson and corner threes by Parmley and Anthony Lijewski whittling the margin down to 42-28.

Tri-Unity answered with a Ethan Eerdmans three-pointer and Titus’ three-point play with 1:14 to go kept the advantage at 15 points (52-37).

Parmley’s three-pointer just inside of the one-minute mark provided a last hurrah for the 22-2 Bison (the senior finished with 23 points to lead New Buffalo).

The Defenders scored three of the game’s final five points from the foul line.

Wyoming Tri-Unity defended the regional crown it earned last year by besting Howardsville Christian in the title contest. The Defenders have claimed the regional trophy 17 times in the past 35 years and achieved their 13th Final Four appearance on March 22 with a 69-57 quarterfinal victory over Adrian Lenawee Christian.

Tri-Unity capped its 2021-22 campaign by sweeping past Burton Genesee Christian in the March 24 state semifinal contest (by a 77-33 score) and Ewen-Trout Creek (a 56-45 overtime victory on March 26) to claim the state championship. Titus poured in 33 points to lead the 21-6 Defenders.